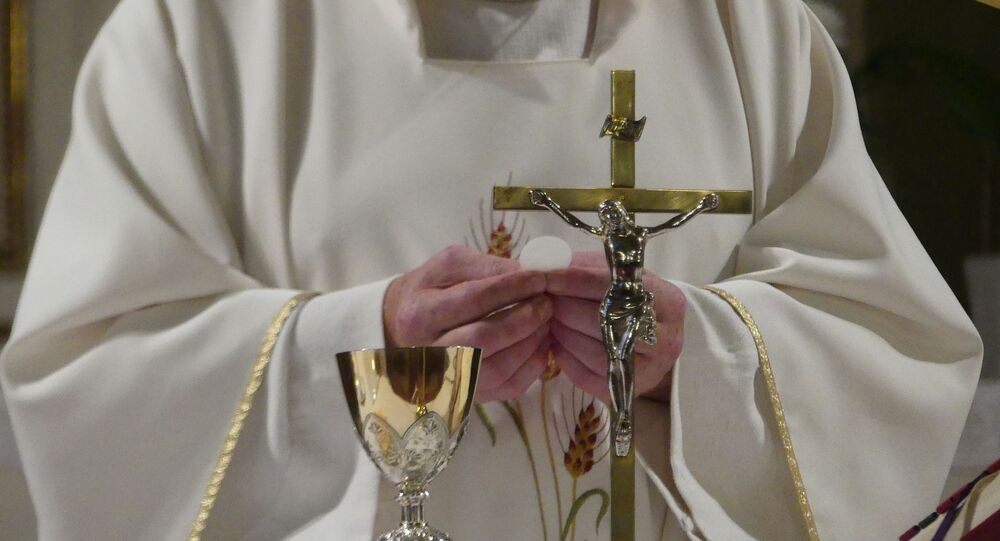 Monsignor Jeffrey Burrill was the second-in-command at the US Conference of Catholic Bishops (USCCB). The news is likely to pile pressure on the Catholic Church, the reputation of which has been severely tarnished in recent years by a slew of sex abuse, sex trafficking and child pornography scandals.

Senior US clergyman, Monsignor Jeffrey Burrill, has resigned in the wake of a report which claimed that he used a dating app for gay, bi, trans and queer people and went to gay bars. In a memo obtained by the National Catholic Reporter, Archbishop Jose Gomez, president of the US Conference of Catholic Bishops (USCCB), told members of the organisation about Burrill’s resignation, noting that the USCCB treats allegations of "improper behaviour" seriously.

The episcopal conference’s spokeswoman, Chieko Noguchi, told the Washington Post that it was the clergyman’s decision to resign.

#BREAKING: Per memo from @ArchbishopGomez, Msgr. Jeffrey Burrill has resigned as General Secretary of the @USCCB. pic.twitter.com/Ci6bCrjA0P

The resignation comes after The Pillar, a Catholic news website, published a report which alleged that Monsignor Burrill was engaged in serial sexual misconduct. The outlet cited commercially available data collected by phone applications, which showed that Burrill used dating app Grindr and visited gay bars in the past three years. The Pillar writes that it hired an independent data-consulting firm to authenticate the information.

It showed that Burrill reportedly used Grindr daily in numerous cities between 2018 and 2020, including at a USCCB staff residence and headquarters. "The mobile device correlated" with the clergyman also emitting signals from Entourage, which describes itself as "Las Vegas’s only gay bathhouse".

The Reverend Thomas Berg, a professor of moral theology at St Joseph’s Seminary in Yonkers, New York, called the report an "enormous scandal".

"[There is] a real disconnect between the appearance of a man who presumably is earnestly striving to live the life of chastity, when it becomes glaringly evident that he is dramatically failing at that because he’s gone to hook-up apps to look actively for sexual partners — that itself is an enormous scandal," Berg told the Pillar.

He noted that in his experience when it becomes evident that a cleric "is regularly and glaringly failing to live continence" that can become "only a step away from sexual predation".

The Pillar’s report is especially damaging for the Catholic Church as, during his tenure as Secretary General of the USCCB, Monsignor Burrill was given the task of coordinating the Church’s response to sex abuse scandals.

The outlet writes that there is no evidence to suggest that the clergyman had sex with minors while using the Grindr app. However, child protection advocates have long drawn attention to Grindr and other dating applications, which protect anonymity and confidentiality and don’t ask for user IDs.
Studies have shown that such apps are used by sex traffickers to market minors. Last year, an Ohio priest was indicted on child pornography and sexual exploitation charges after it became known that he paid a 15-year-old for sex on several occasions and coerced other minors into sending him sexually explicit photos and videos, while posing as a woman.

The Pillar’s report has been condemned by some clergymen and journalists, who accused the outlet of violating Burrill’s right to privacy.

Father James Martin questioned the accuracy of the Pillar’s report, which he described as a witch hunt.

"Is there any indication that an actual 'investigation' took place? Not in the article. One has to ask the old question: 'Cui bono? [Who is the beneficiary?]' These kinds of witch hunts must end for the good of the church. After all, why not spy on everyone who works for the church? Why stop at priests? Why not spy on unmarried lay teachers at Catholic schools? Perhaps they're sexually active. We could track them from their houses to see. Why not spy on married pastoral associates in parishes? Perhaps they're using birth control. We could get their receipts from drug stores. And why stop there? Why not spy on all parishioners?" he fulminated in his statement on Facebook.