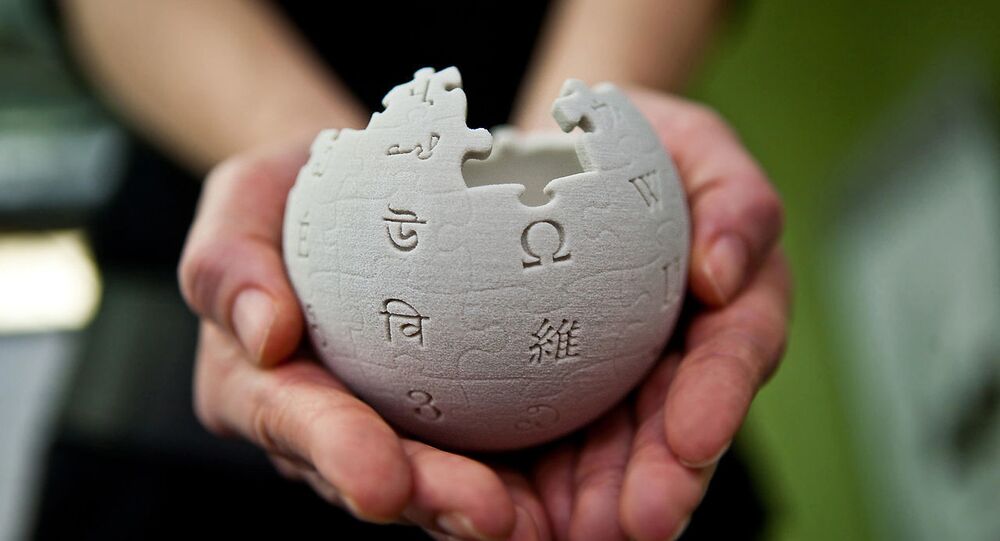 The name of the project, launched by Jimmy Wales and Larry Sanger in January 2001, is a portmanteau of the Hawaiian word wiki (meaning quick) and encyclopaedia.

Wikipedia co-founder Larry Sanger has claimed that the online encyclopaedia can no longer be seen as a source of unbiased information because the project's volunteers prefer to remove the news that is out of sync with their agenda.

When asked whether Wikipedia can be trusted, Sanger told the news website Unherd.com: "You can trust it to give a reliably establishment point of view on pretty much everything".

"Can you trust it to always give you the truth? Well, it depends on what you think the truth is", the Wikipedia co-founder said.

He added that he subscribes to a view that "teams of Democratic-leaning volunteers" scrap content that is not up their alley, including information about scandals pertaining to US President Joe Biden and his son Hunter.

In a separate interview with the Daily Mail, Sanger referred to an article about Biden on Wikipedia, which "if you look at it, has very little by way of the concerns that Republicans have had about him [POTUS]".

He added that if users want "to have anything remotely resembling the Republican point of view about Biden", they are "not going to get it from the article".

"And there is a paragraph - and it is quite a long article so there should be at least a paragraph - about the Ukraine scandal. Very little of that can be found in Wikipedia. What little can be found is extremely biased and reads like a defence counsel's brief, really", Sanger noted.

He recalled the Wikipedia passage on the Bidens doesn't include any mention of Hunter Biden allegedly receiving a whopping $600,000 per year to serve on the board of the Ukrainian energy firm Burisma from 2014 until 2019.

In September 2019, Joe Biden was hit by a scandal after allegations surfaced that he used his status as vice president under Obama to force former Ukrainian President Petro Poroshenko to drop a criminal investigation against his son Hunter. The latter was the subject of a probe into a Burisma corruption case that was dropped after Poroshenko sacked Ukrainian prosecutor Shokin, who ran it. Biden has repeatedly denied any wrongdoing, insisting that he's never discussed business dealings with his son.

© CC0 / Pixabay
‘Political Ploy’: Wikipedia’s Unaccountable Editors Turn Site into ‘Playpen’ for Western Imperialism
As far as the Joe Biden entry on Wikipedia is concerned, it also failed to mention a scandal surrounding Hunter Biden's purported laptop, which the president's son ostensibly forgot at a computer repair shop in Wilmington, Delaware in April 2019.

The notebook contained emails suggesting that Biden was asked by one of the top executives on the board of Burisma to use his connections for the benefit of the company. In another email, adviser to Burisma's board Vadym Pozharskyi thanked Hunter for organising a meeting with his father, then US Vice President Joe Biden, something that clearly casts doubt on Joe Biden's claims of non-involvement in the overseas business affairs of his son.

Sanger additionally referred to "a lot of people who would be highly motivated to go in and make the [Wikipedia] article more politically neutral but they're not allowed to". According to the Wikipedia co-founder,"it's quite remarkable considering that the neutrality policy is still in place".

Since being launched back in January 2001 by Sanger and Jimmy Wales, Wikipedia has accumulated millions of articles in dozens of languages (with the English version alone featuring over 6,229,000) compiled by thousands of editors from all over the world.

WikiPedia Founder: Twitter Would Have Banned Donald Trump and Elon Musk if Not for Their Status

Editors or Censors? The Hidden Hand Behind Wikipedia