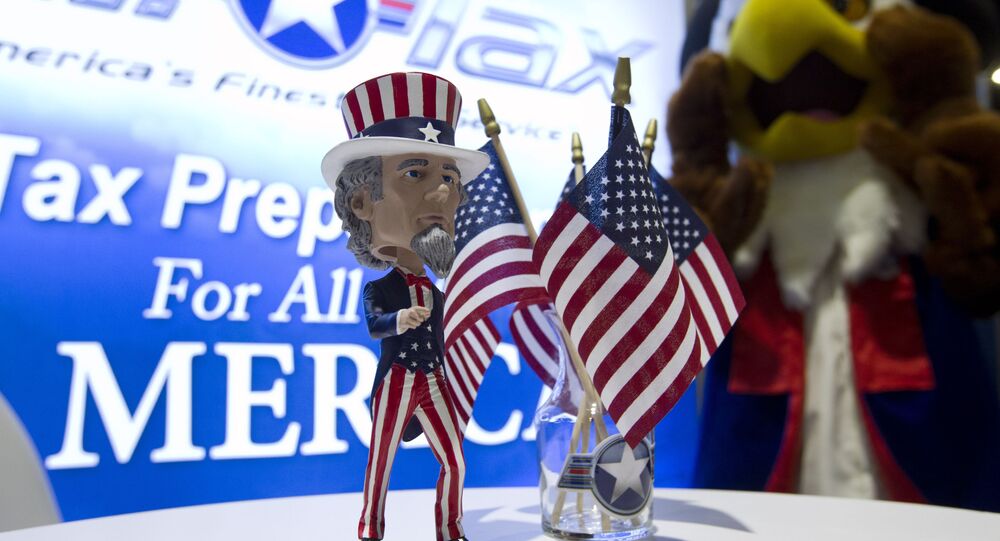 On Sunday, Americans from sea to shining sea mark Independence Day, commemorating the 4 July, 1776 declaration of independence from the British Empire. On the anniversary of the holiday, Sputnik explores some of the iconic symbols which the modern world commonly associates with the United States.

245 years ago, the leaders of the thirteen American colonies signed the declaration of independence, formally casting off British rule and establishing a constitutional republic. In the centuries since, the country has used a combination of economic might, military conquest and cultural and diplomatic soft power to spread its influence to every corner of the globe, with a number of symbols, products and cultural products coming to be seen as quintessentially American.

For much of the 20th century, the Statue of Liberty overlooking New York harbour served as one of the America’s most iconic symbols. Largely paid for by France and built by French artisans and craftsman, the statue arrived in the United States in 1885 in 214 separate boxes consisting of 300 pieces.

The statue wears size 879 sandals and has an 11 meter waistline, and according to popular legend, sculptor Frederic-Auguste Bartholdi modeled its face after his mother, and the body after a mistress of his. Gustave Eiffel, the world-famous engineer best known for the Eiffel Tower, also took part in the project, creating the primary support structure hidden within the statue. Originally, the statue's copper plating gave it a brown colouring. However, with time, oxidation turned it green, with this iconic green being the colour people associate with the statue today.

If the Statue of Liberty is the feminine equivalent of the United States, Uncle Sam is its male approximation. Legend has it that the lanky, white-haired, bearded, top-hat and bow-tie wearing symbol was inspired by Samuel Wilson – a New York meatpacker who supplied food to the US Army during the War of 1812. Soldiers supposedly began referring to him as ‘Uncle Sam’ due to the labeling of packages ‘E.A. – US’ (with E.A. standing for the initials of the contractor, Elbert Anderson, and US being short for United States), although soldiers reportedly playfully referred to it as ‘Uncle Sam’.

This origin story has been disputed by historians, but whatever his origin, Uncle Sam quickly became popularized as the defining symbol for the American government in the 1860s and 1870s by political cartoonist Thomas Nast. In the 150 years since, Uncle Sam has been used in countless representations of America, both good and bad.

The famous American hot dogs and hamburgers were actually invented in Germany and Belgium before being brought across the Atlantic by immigrants. Commercial fast food as it is known today began to take shape in the United States in the 1920s, although the concept of quickly prepared, standardized, and cheap goes back all the way to ancient Rome.

The White Castle chain of fast food restaurants is often credited with being the pioneer in its field, with the company founded in Kansas in 1921, and featuring a signature dish of hamburgers sold for five cents apiece. While the chain remains successful today, and has several hundred locations across thirteen US states today, it and all other fast food companies have been eclipsed by McDonald’s, which emerged in San Bernardino, California in 1955 and quickly spread into a global empire stretching across every continent and numbering over 37,000 locations worldwide.

The idea of McDonald’s as a ‘global empire’ is no exaggeration. In 1999, well-known New York Times journalist, US empire proponent and economic globalism advocate Thomas Friedman famously came up with the Golden Arches theory, which proposes that any two countries in which McDonald’s restaurants operate will not engage one another in a war. The rationale behind the theory is that countries where McDonald’s operate are drawn into the US-dominated world economic system in which direct conflict is detrimental to their self-interest.

© AP Photo / Alexander Zemlianichenko
In this Wednesday, Jan. 31, 1990, file photo, hundreds of people line up around the first McDonald's restaurant in the Soviet Union at Moscow's Pushkin Square, on its opening day

The drink most associated with America by billions of people around the world is Coca-Cola – the sugary soft drink invented by Atlanta pharmacist John Stith Pemberton in 1885. The original recipe for the drink contained small amounts of cocaine in the form of an extract of the coca leaf – inspiring the “Coca” part of the beverage’s name. Pemberton advertised the drink as a medicinal “brain tonic and intellectual beverage” which could cure headaches, upset stomachs and fatigue. The amount of cocaine in Coca-Cola was gradually reduced over time, and eliminated completely in 1929.

In recent decades, Coca-Cola has sought to use its brand as a symbol for globalization and unification of the people of the world under the banner of liberal market capitalism and American-style democracy. However, critics of the drink and brand have criticized it for its aggressive marketing to children in schools, and the health problems it’s known to cause or contribute to.

15 May, 1950 cover of Time Magazine featuring Coca-Cola giving a drink to the world.

Recently, Portuguese football legend Cristiano Ronaldo shaved several billion dollars off Coca-Cola’s market value after removing a pair of Coca-Cola bottles placed in front of him during a press conference and urging people to drink water instead.

Love it or hate it, but the US flag design is one of the most recognizable and iconic in modern history. Its 13 red and white stripes –symbolising the thirteen British colonies which cast off British rule in 1776, and thirteen white stars against a blue background in its upper left corner, has been changed a whopping 26 times in 240+ years to account for US expansion and the recognition of new states. The red in the flag is said to symbolize endurance and valour, white –innocence and purity. Dark blue symbolizes diligence and justice.

Blue jeans are widely recognized as the most American piece of clothing. They were popularized by German-born businessman Levi Strauss, who founded his company in 1853 in San Francisco. Strauss moved to America during the California Gold Rush, but instead of going out to seek his fortune in the mines, streams and riverbeds, the entrepreneur decided that he would create a sturdy pair of pants for those who did. The garment popularized by Strauss was actually invented by Jacob Davis, a Russian Empire-born Latvian-American tailor who was a friend and business partner to Strauss.

For many decades after their creation, jeans were seen as work clothes. It wasn’t until the 1950s that they became seen as a hip part of everyday attire among young people. During the Cold War, many an envious resident of Moscow, Warsaw or East Berlin would look longingly at a pair of Levi's as a symbol of the American lifestyle, while rejecting in derision locally-made analogues which were usually no worse in terms of quality or durability.

When one thinks of quintessentially American music, the genres of country and jazz typically top the list, with the latter –which is presently considered the entertainment of well-to-do suburbanites and hipsters, originating in the 1910s in African-American communities in the southern United States. In the century plus that it’s been around, jazz has become seen by many as a form of high art, particularly for the talent and ability to improvise by its performers, and has spawned countless subgenres.

© AP Photo / Eddie Adams
In a June 21, 1971 file photo jazz great Louis Armstrong practices with his horn at his Corona, New York home on June 21, 1971. A live recording of Louis Armstrong playing his trumpet for one of the last times is being played Friday April 27, 2012 at the National Press Club in Washington where it was created in January 1971.

The superhero craze which today attracts hundreds of millions of loyal fans worldwide and spawns countless sequels and reboots is another American invention, although its origins lie in the mythical legends of Ancient Greece and their stories of beings with supernatural powers used to impart certain morals and values to society.

The first modern superhero –Superman, was created for DC Comics by writer Jerry Siegel and artist Joe Shuster in 1938, with Batman born shortly after in 1939 – being the brainchild of author Bill Finger and artist Bob Kane.

Over the decades, American superheroes have transformed together with the socio-cultural changes affecting America itself, with its original pantheon of chiseled chinned, broad shouldered muscle-bound white men gradually giving way to new heroes, including women, minorities, and even gay and transgender characters. The new take on the old tales has come as modern writers and marketing executives have deemed it a necessity for almost every group in contemporary American society to have a powerful and positive role model.

In some sense, the American superhero, more than any other symbol in this list – provides a special insight into the modern American psyche and cultural code, and its frantic effort to keep up with the times and adapt to changing realities, all while washing out the unique and vibrant features which created it in favour of bland and generic, but inoffensive and commercially viable, messages.