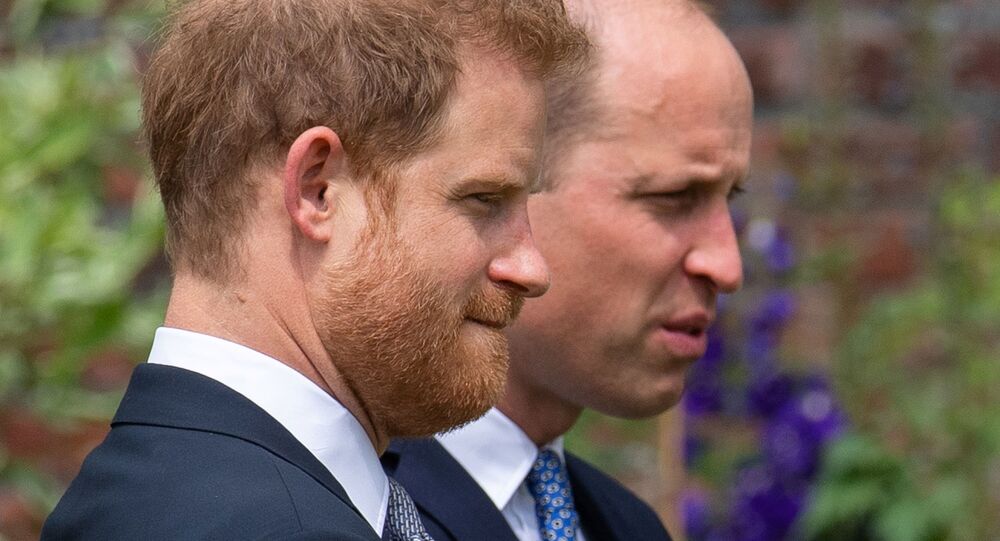 Harry admitted in 2019 that he and his older brother Prince William were on “different paths" and their relationship hasn't improved since, according to numerous reports. His hasty marriage to Meghan Markle is allegedly to blame.

Prince William’s office is being blamed for “mental health” stories about Prince Harry that emerged in the aftermath of the latter's remarks while touring South Africa that revealed the rift between the brothers.

The duke of Sussex told ITV’s Tom Bradly in 2019 that he and his brother William were “certainly on different paths at the moment."

Harry added that he loved William “dearly” and would always “be there for him” but these comments  confirmed long-circulating rumours that the royal bros had drifted apart after Meghan Markle joined Buckingham Palace.

VIDEO: Prince Harry on that “rift” with his brother, William: “Inevitably stuff happens” he said. “We are certainly on different paths at the moment but I’ll always be there for him”.
pic.twitter.com/MouenCO3T4

​Omid Scobie, Harry and Meghan’s biographer and alleged pal, said in a new ITV documentary that it was “no coincidence” that reports about the duke’s mental struggles started to circulate following his revelation to Bradly.

William’s aides at Kensington Palace peddled these claims, he alleged, adding that the whole thing turned out quite “ugly” for Harry.

“I would say that it was no coincidence that it was shortly after that [South Africa documentary] aired, even the next day, there were source quotes that came from a senior aide at Kensington Palace saying that William was worried about his brother’s mental health,” Scobie claimed in newly released ‘Harry & William: What Went Wrong?’ documentary.

According to the co-author of "Finding Freedom," who often adopts the role of the Sussexes’ unofficial  spokesman, the situation “fed off such an ugly thing for Harry and it did not go unnoticed.”

“Now whether William directed that or not, no one will ever know, but it came from his household that he is the boss of,” Scobie added.

He did not back up his claim and it’s not clear how he came to the conclusion that Prince William’s staff were responsible for speculation about Harry’s mental health struggles.

"Finding Freedom," co-written by Scobie and Carolyn Durand and published in 2020, shines a kind light on the Sussexes' bid for an independent life.

© REUTERS / POOL
Britain's Prince William, The Duke of Cambridge, and Prince Harry, Duke of Sussex, attend the unveiling of a statue they commissioned of their mother Diana, Princess of Wales, in the Sunken Garden at Kensington Palace, London, Britain July 1, 2021

Meghan’s legal team admitted that the book was penned with her silent approval, as the duchess’ close friend communicated with the authors to lay out “the true position” and “prevent any further misrepresentation."

Meanwhile, the new ITV documentary openly claims that it tries to “explore allegations that many of the negative stories about Harry and Meghan were the result of briefings from within the palace.”

Prince Harry himself recently admitted his mental health struggles in a series of bombshell interviews with Oprah Winfrey – he's also attacked his royal relatives for disregarding his and Meghan’s struggles in the palace.

Robert Lacey, a royal biographer who was one of the first people to speak publicly about Harry and William’s feud in his bombshell “Battle Of Brothers” book, said in the new doc that he spoke to “someone close to William” to learn that he “felt from an early stage that Meghan had an agenda.”

Lacey has recently claimed that Prince William once dubbed Markle a “bloody woman” and “merciless” over claims that she bullied his palace staff. According to the writer, William was generally against Harry’s hasty decision to marry the American actress. This brotherly advice reportedly left Harry fuming and laid the foundation for the ongoing fraternal divide.