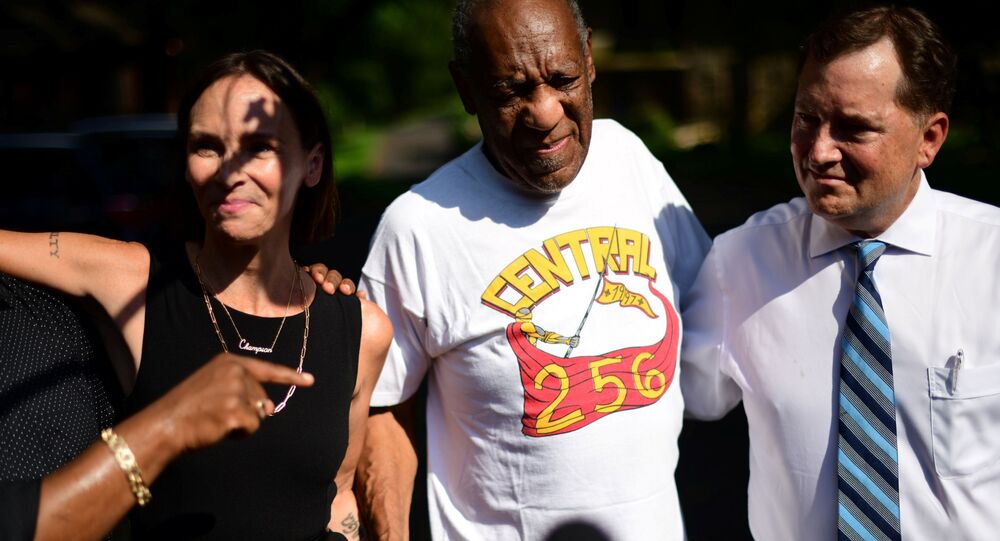 Earlier, the Supreme Court of Pennsylvania overturned the sexual assault conviction struck against famed US comedian and actor Bill Cosby, who was in the midst of serving more than two years of a prison sentence. The rescinded conviction came down on a legal technicality that stemmed from a past agreement with state prosecutors.

Controversial figure Bill Cosby offered thanks and appreciation to his fans and supporters on Wednesday, moments after the entertainer freely walked away from prison.

Hours after the Pennsylvania Supreme Court unexpectedly cleared his 2018 conviction, Cosby took to social media and tweeted that he was thankful for having fans that stood by him throughout his "ordeal."

"I have never changed my stance nor my story. I have always maintained my innocence," Cosby tweeted. "Thank you to all my fans, supporters and friends who stood by me through this ordeal."

"Special thanks to the Pennsylvania Supreme Court for upholding the rule of law," he added, closing his statement with a "#BillCosby."

​The tweet also included an image of a closed-eyed Cosby holding his fist in the air, a stance highly synonymous with expressing resistance.

Cosby walked away from the State Correctional Institutional Phoenix, in Shippack, Pennsylvania, just before 2:30 p.m., local time. Images released from the scene showed a handcuffed Cosby escorted away from the building by two law enforcement officials.

The high court's 4 to 3 ruling on Cosby's release came down to a legal technicality after it was determined that the entertainer's right to due process was violated, as a 2005 agreement with then-Montgomery County District Attorney Bruce Castor prevented Cosby from being charged on the sexual assault allegations.

After Castor left the prosecutorial office in 2008, his successors opted to reopen the case, eventually filing offenses against Cosby before a 12-year statute of limitations expired on charges that stemmed from the entertainer drugging and sexually assaulting Andrea Constand, who previously detailed to authorities that Cosby had taken advantage of her in January 2004.

The court ultimately ruled on Wednesday that denying Castor's non-prosecution agreement with Cosby was an "affront to fundamental fairness."

Cosby's case, involving many women who came forward to allege that he had drugged and raped them, was considered one of the most high-profile convictions that emerged at the height of the 'Me Too' movement after he was found guilty on three counts of aggravated indecent assault. He had been serving a 3- to 10-year prison sentence when the ruling came down.

30 Years On, Eddie Murphy Still Telling Cosby to Have a Coke and Smile