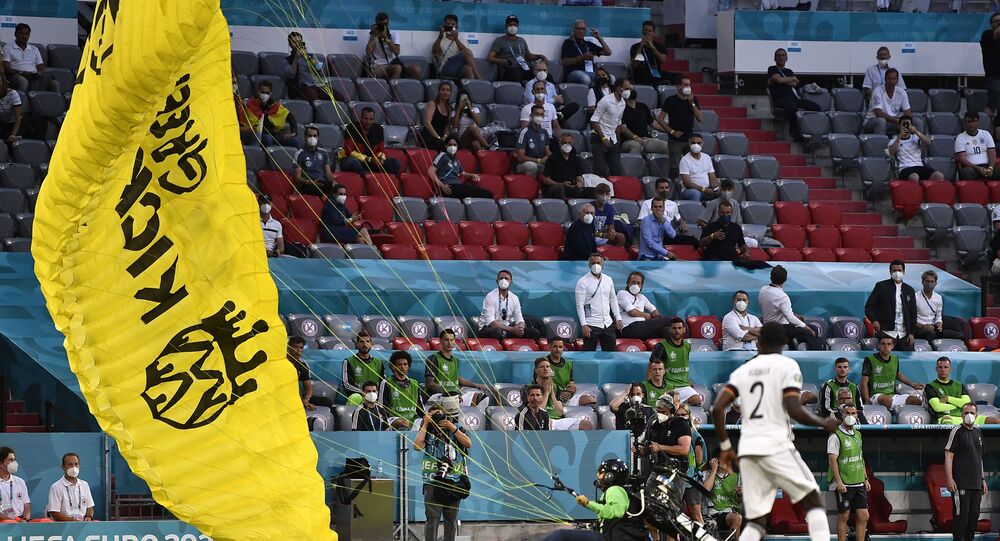 Before the Group F match between the national teams of Germany and France kicked off, spectators had the chance to watch a different kind of show, which at some point could have turned dangerous.

A climate change protester was filmed manoeuvring his parachute over the pitch of the Munich Arena on Tuesday, where a match between France and Germany was about to begin, struggling to land in a manner that would not harm any viewers or footballers.

The yellow parachute of the protester had the line "Kick out oil Greenpeace" on it, calling to ditch oil in favour of other more ecologically sustainable alternatives. The noble call did not go according to plan, however, as Greenpeace later admitted in its Twitter account, apologizing for disrupting the event and expressing hope that no one was injured.

"This protest was never intended to disrupt the game or injure people", the organization tweeted. "Greenpeace actions are always peaceful and non-violent. Unfortunately, not everything went according to plan with this campaign."

​According to Greenpeace, the parachutist was supposed to go over the stadium and let a soft ball float down to the pitch with a protest message to EURO 2020 sponsor Volkswagen. However, videos shared on social media show that the reality turned out to be slightly threatening.

Greenpeace protestor landing in the stadium ahead of Kick-off. [@MaxMerrill_] #EURO2020

Can't believe I just caught this on video. Parachuted into the stadium, got caught in the spider cam and nearly crashed into the crowd. Hope he's ok! #GERFRA #EURO2020 pic.twitter.com/PJ49WYdFM9

​According to reports from journalists at the scene, none of the crew was injured, but it "looked like parachuter made contact." The glider reportedly broke his ankle, and one woman may also have been injured, but those reports were not confirmed.