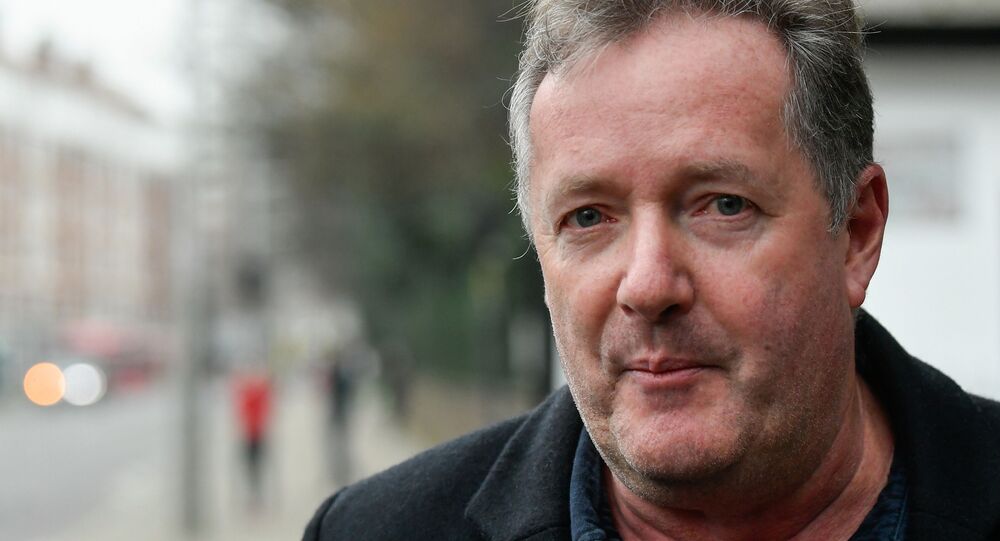 Former Good Morning Britain host Piers Morgan says he lost his long-term job at ITV after failing to apologise for calling Meghan Markle a “liar” over her attacks on the royal family during the Sussexes' scandalous Oprah Winfrey interview.

The ex-Good Morning Britain (GMB) host blasted the former senior royals once again for trying to cash in on their ducal titles – including recently penned Netflix and Spotify deals – while also trashing the royal family in a series of interviews and podcasts.

“These two want to have the royal cake and eat it,” Morgan fumed to Hannity.

He also said it was time Harry and Meghan gave up their titles and “stopped whining 24/7.”

Piers famously stormed off the GMB set in March after crossing swords with co-host Alex Beresford after he grilled Markle over her “lies” during the Oprah interview. He later officially resigned from his position, which he held for over five years.

© AP Photo / Aaron Chown
A man watches a phone screen showing an interview of Prince Harry and Meghan, The Duchess of Sussex, by Oprah Winfrey, in London Monday, March 8, 2021

The Duchess of Sussex claimed during the bombshell talk with Oprah that she was denied help from Buckingham Palace aides when feeling suicidal during her pregnancy with Archie. She also made some dubious allegations and claims against the royals, including that one unnamed senior royal had “concerns” about the skin colour of her unborn son and that she had married Harry a few days before the official ceremony took place. The Archbishop of Canterbury later dismissed the claim.

According to Morgan, he was pressured to apologise for refusing to believe Markle’s "32 lies" or otherwise resign. He chose the latter and after leaving the show, he apparently learned that Markle had complained to ITV bosses about his rant, further prompting his exit.