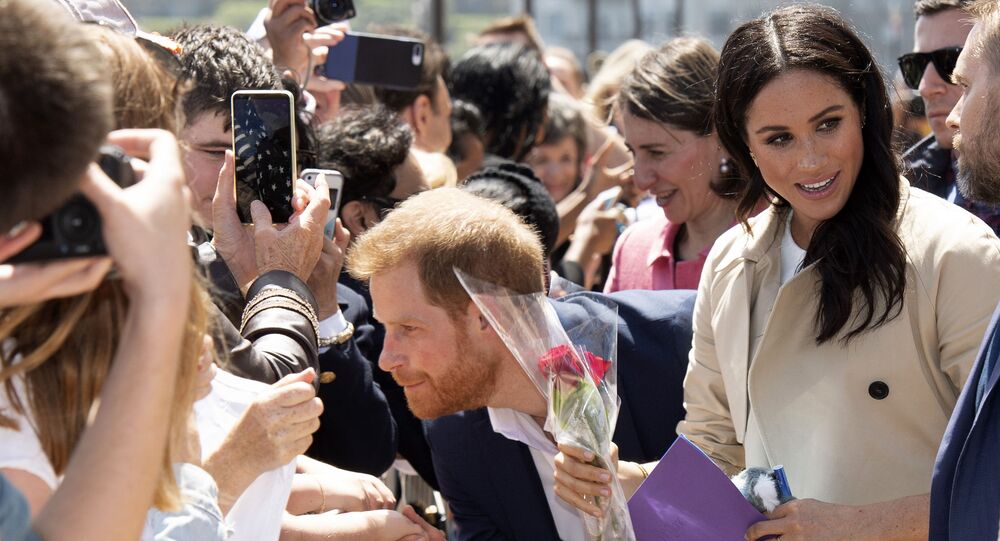 Lilibet "Lili" Diana Mountbatten-Windsor, Prince Harry and his wife Meghan's second child, was born on 4 June at Santa Barbara Cottage Hospital in California, in the US. The girl's name is a tribute to both her late grandmother Princess Diana, her great-grandmother Queen Elizabeth II, and even Prince Philip, who used to call his wife "Lilibet".

Lilibet Diana is only three days old but is already firing the world's press with heated debates about the curious message behind her name.

Happy parents Prince Harry and Meghan welcomed their daughter on Friday, announcing a few days later that they have decided to name their child after Her Majesty The Queen with a nod to her nickname "Lilibet". The middle name was carefully chosen to "honour her beloved late grandmother" Princess Diana, the couple said.

But the choice has left many observers rolling their eyes: is this a genuine impulse to pay tribute to a bunch of respected royals in one go or just an elaborate marketing strategy?

Many would certainly see the choice of name as "an attempt at healing and reconciliation", according to royal commentator Richard Fitzwilliams, in the wake of the couple's controversial March interview with Oprah Winfrey, that stained the Royal Family with accusations of "racism" and "neglect".

"This is something that will have been cleared with the Queen beforehand. The Sussexes, I'm sure, would not have done it otherwise", Fitzwilliams told Sputnik.

But Anna Pasternak, the author of "The American Duchess: The Real Wallis Simpson", believes there might be something more behind the Sussexes' attempt to "honour" the Queen.

"Choosing the name Lilibet hints at over-familiarity and an intimacy between Meghan, Harry and the Queen, which I am not sure is currently valid", Pasternak said. "This was the Duke of Edinburgh's nickname for the Queen, so an affectionate but intimate name and unless the Queen gave the Sussexes permission to use it, it feels presumptuous to me, for them to have chosen this name".

For those in the other camp, the baby girl's birth is typical behaviour for her scandal-ridden parents who left their senior royal posts last year to move across the pond and continue trashing their British past in a series of interviews, podcasts, and documentaries.

They stole another royal nickname to name their newest kid. This time a very personal and private nickname of the Queen. Then they didn't even tell the royal family themselves that the baby was born This is definately not an olive branch.

​Brendan O'Neill, the editor of Spiked Online, says the choice of name looked like "a little bit of a PR stunt" and a "cynical" attempt to wash out their past comments bashing the family and how it "ruins people's lives".

"There's something slightly cloying about it, but I don't want to be too uncharitable", O'Neill said in an interview with Sky News.

The Sussexes' famous critic Piers Morgan agrees: the name move was really "ironic". But the former "Good Morning Britain" host, who says he left his job after refusing to apologise for slamming Meghan Markle for her "downright lies" in the Oprah Winfrey interview, sarcastically notes that he will not comment on the issue any further. After all, Lilibet's parents made the move to the US in search of peace and a simple life.

To those asking for my reaction to the new royal baby, I am respecting her parents' constant pleas for privacy and declining to comment.

When Will We See Lili's Photos?

According to Omid Scobie, Meghan Markle's biographer and alleged pal, the couple are not willing to share a photo of their baby daughter so soon this time. But will Lili's privacy-seeking parents sell her first photo exclusively to American outlets? Richard Fitzwilliams thinks it's unlikely.

"If you look at what they've done in recent weeks and months, I wouldn't be able to predict anything. They haven't yet shared a photo. I'm sure that they will, probably photos or perhaps videos, but how they'll do that will be what they decide. I wouldn't have thought that it would necessarily be any problem of an exclusive to an American magazine. I think that they see America and the wider world as the particular target for their brand, and I would have expected that", the royal expert explains.

According to Fitzwilliams, Prince Harry and Meghan are "certainly unpredictable as a couple". After all, they left many, including the press and even reportedly Buckingham Palace, unaware about the girl's arrival.

The couple, who will not be sharing a photo at this time, are now on parental leave. For those asking about sending gifts, Harry and Meghan have asked well-wishers to support or learn about the following women-focused orgs: @girls_inc, @Camfed, @MynaMahila and @HarvestHomeLA.

So let me get this right, Prince Harry & Meghan Markle, Duke & Duchess of Sussex welcomed a baby girl 2 days ago, named her Lilibet Diana Mountbatten-Windsor which is a acknowledgement of both the Queen & Diana, and the press had literally no idea. pic.twitter.com/gs15uypSSl

Leslie Carroll, another royal commentator and author of "American Princess: The Love Story of Meghan Markle and Prince Harry", believes the couple are not interested in making money on their offspring.

"The Sussexes were extremely private with the birth of their first child, Archie and have thus far shown no interest in commoditizing their children. I expect that to continue", Carroll shared with Sputnik.

According to Pasternak, however, the Sussexes could go as far as to reveal the photographs of their newborn on a new Oprah show.

"Their version of 'private' is certainly not most people's view of what privacy entails", the writer added.

Royal Commentator and Deputy Editor at Royal Central Brittani Barger believes the couple may eventually share an image on the Archewell website "like they did of Archie for his birthday this month".

"I don't see them doing a magazine cover here in the US. They could, too, share the image with Gayle King to share on a morning show as they are close to her".

The Duke and Duchess of Sussex are on "parental leave" now and have asked those who wish to congratulate them to support women-focused charities. Many on social media are curious, however, whether the two ex-senior royals were taking a leave from their attacks on the Royal Family.

Parental leave from what? From not being royals? From disparaging their respective extended families?

Parental leave from throwing their families under the bus?

leave from what? attacking the family?

After abusing the race card you’d think Meghan markle Would name her daughter after her Black mother and not the alleged racist white queen. Always lying, and not very well. #megxit #lilibetdiana