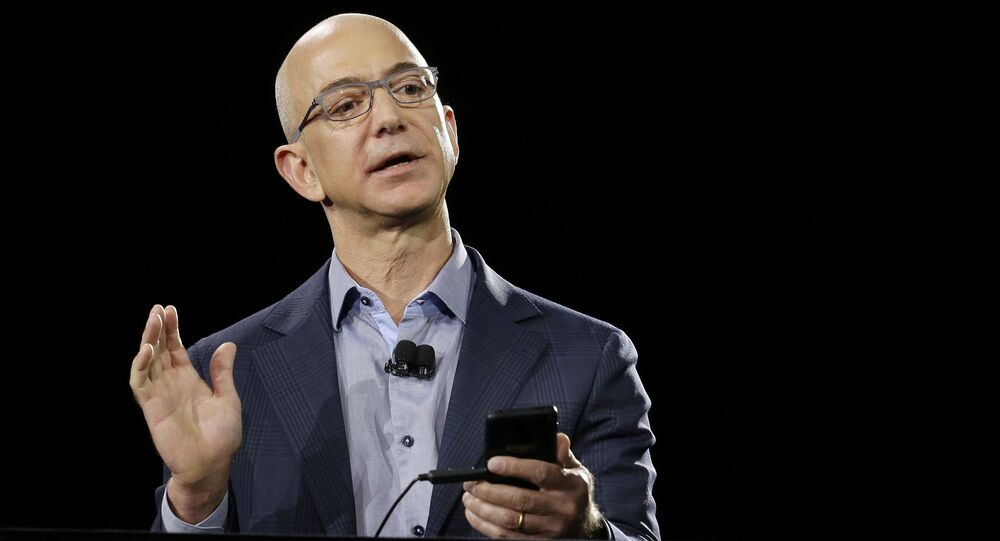 The development follows a long saga that began in 2019, when the US tabloid the National Enquirer reported on the Amazon's founder extramarital affair, publishing his text messages and intimate photos, including what the media claimed was nude photos of Bezos and his lover.

A new biography on Jeff Bezos has shed light on his feud with the National Enquirer, the New York Post reported citing excerpts of the recently-published book. Jeff Bezos claimed the newspaper partnered with Saudi Arabian hackers to steal information from his phone.

In "Amazon Unbound: Jeff Bezos and the Invention of a Global Empire", author Brad Stone argues that there is no "conclusive evidence" to support Bezos' claim that Riyadh was connected to the exposé published by the National Enquirer. Stone writes that the personal texts and intimate photos the newspaper obtained were given to them by Michael Sanchez, the brother of Lauren Sanchez, Bezos' lover.

According to the biography, the siblings had an "unusual" relationship, with Lauren "frequently" forwarding messages and photos she got from the Amazon founder. Michael then sold the photos and messages to the newspaper for around $200,000, writes the author of the book.

Stone argues that Bezos' claim about Saudi Arabia's involvement was "only a fog of overlapping events, weak ties between disparate figures, and more strange coincidences".

"For Bezos and his advisers, though, who were still trying to positively spin the embarrassing events surrounding his divorce, such a cloud of uncertainty was at the very least distracting from the more unsavory and complicated truth", writes Brad Stone.

Below The Belt Selfie Aka the D**k Pic

According to the messages Jeff Bezos posted in an essay in 2019, the National Enquirer blackmailed him about the "below the belt selfie — otherwise colloquially known as a 'd**k pic'". Stone claims the photo Michael Sanchez gave to the newspaper was not Jeff Bezos' manhood, but a picture of a penis he downloaded from an escort site for gays, Rent.men.

An Amazon spokesman has not commented on the issue yet.

What Did Bezos Say?

In the wake of the exposé, Bezos launched an investigation to find out how the tabloid had obtained private information. It revealed that Saudi Arabia reportedly hacked his phone and received access to the data. The Guardian wrote that Saudi Arabia hacked Bezos'who  phone when Crown Prince Mohammed Bin Salman sent Bezos a video.

Riyadh has categorically dismissed the allegation.

The Amazon founder alleged that the exposé about him was connected to his ownership of The Washington Post. The newspaper launched scathing attacks on Riyadh after the killing of Jamal Khashoggi, a longtime critic of the Saudi royal family and a WaPo contributor.

He disappeared in 2018 after entering the Saudi Consulate in Turkey to obtain documents for his marriage. A subsequent investigation found that members of Saudi intelligence agencies had killed him in a rogue operation, dismembered his body and disposed of it.

Riyadh initially denied any knowledge of Khashoggi's whereabouts, but as the investigation proceeded, made more and more admissions. A US intelligence report claimed that Crown Prince Mohammed Bin Salman had approved the operation to "capture or kill" Khashoggi, but the Saudis dismissed the allegations as "false and unacceptable". The kingdom has arrested and sentenced several people for their role in Khashoggi’s murder.

"Some Americans will be surprised to learn that the Saudi government has been intent on harming Jeff Bezos since last October, when the Post began its relentless coverage of Khashoggi's murder. The Saudi campaign against Bezos has already been reported by CNN International, Bloomberg, The Daily Beast, and others", Gavin de Becker, Bezos' top security consultant wrote in The Daily Beast in 2019.

Becker said that investigators hired by Bezos as well as other experts "concluded with high confidence that the Saudis had access to Bezos' phone, and gained private information".