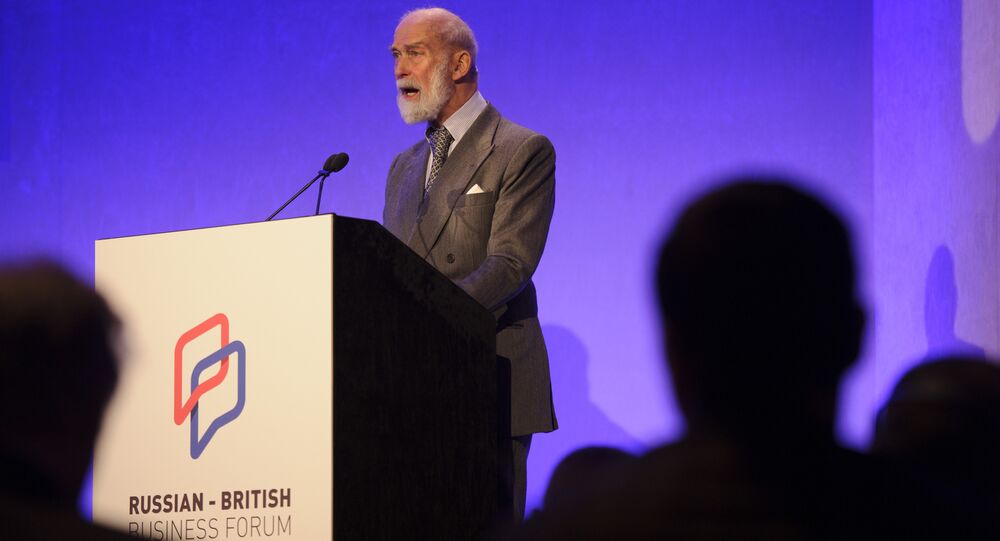 Prince and Princess Michael of Kent are not working members of the British Royal Family. The official Royal Family website describes Queen's first cousin as being "connected to Russia through his maternal grandmother [Grand Duchess Elena Vladimirovna, the granddaughter of Russia's Alexander II]", and as having "a strong interest in the country".

The Queen’s cousin, Prince Michael of Kent, has been accused of being willing to market his royal status in return for privileged access to Russia’s President Vladimir Putin. The claims were made by Channel 4 Dispatches in collaboration with newspaper, The Sunday Times.

In a recording believed to have been made during a covert meeting, the royal supposedly admitted that a modest daily fee of £10,000 ($13,974.50) would buy his royal recommendation and, accordingly, “confidential” introductions to the Russian president’s inner circle.

The British Royal family remains a much-loved institution but questions over how some are willing to exploit their royal status risks tarnishing their golden reputation.

​The undercover operation presumably required reporters to disguise themselves as investors on behalf of a fake South Korean gold company called House of Haedong.

The journalists' ploy revealed that the 78-year-old prince might be persuaded to provide his apartment in Kensington Palace as a venue for recording an endorsement speech promoting the firm.

We set up a fake South Korean gold company, the House of Haedong, and asked Prince Michael to make a speech that trades off his royal status and gives the company royal support in order to impress its investors.
He said “the idea makes me very happy.” 2/ pic.twitter.com/dyMLdcbxml

​The first cousin of the Queen earns a living acting as the chairman of his own private consultancy company.

Before the operation, the fake reporters claimed to have approached five members of the royal family to test how amenable they might be to the questionable offer.

He said he was willing to accept $200,000 from our fake company in return for making the speech. #RoyalForHire
3/ pic.twitter.com/qODD4Wta5e

The report says that in a covert recording with the undercover reporters, Prince Michael’s business partner, the Marquess of Reading, referred to him as "Her Majesty's unofficial ambassador to Russia".

Prince Michael's close friend and long-term business partner Lord Reading said the prince would be willing to trade off his royal heritage and could seek access to Russian President Vladimir Putin in order to open doors for our fake South Korean gold company. 4/ pic.twitter.com/HykczLtdfb

"I think ... this is kind of slightly discreet, we're talking relatively discreetly here… Because we wouldn't want the world to know that he is seeing Putin purely for business reasons, if you follow me," he reportedly said.

The bombshell claims have been vehemently dismissed by Prince Michael.

The prince’s office issued a statement denying he had any “special relationship” with Vladimir Putin, adding that the royal had not had any contact with the Russian President or his team since their last encounter in June 2003.

Furthermore, the spokesman said that Lord Reading had "made suggestions which Prince Michael would not have wanted, or been able, to fulfil," during the secretly recorded meeting.

"As is standard practice, Prince Michael's private secretary made it clear to the company's representatives during their conversations that nothing could proceed without the agreement of the British Embassy and the help of the Russo-British Chamber of Commerce, of which Prince Michael is patron," said the statement.

The report comes in the wake of a succession of cringeworthy scandals plaguing the royal family. Accusations levelled at disgraced Prince Andrew over the Jeffrey Epstein sex scandal have driven the Duke of York to keep a low profile, and Prince Harry and Meghan Markle dished out allegations of racism against "the Firm" as the Royal Family was dubbed by George V, in their "tell-all" interview with Oprah Winfrey.

On this occasion, netizens drew attention to these recent problems, some sarcastically suggesting it is time for the royals to “sort themselves out”.

Oh dear. That's sods' law for you. The very very first time he tries a bit of corruption he gets caught out. You couldn't make it up could you. Now everyone will think he has been on the make for years. Such jolly bad luck.

If you read the text, it’s his friend who made the claim he had access to Putin, not he.

These people are simply awful. Ditch the lot, finish the soap opera and let’s move on.

I know senior members of the Royal family are not known for their intellect or for being particularly well educated, but seriously with this, the Prince Andrew debarcle and the fall out from Harry and Meghan, they really need to sort themselves out. Once again, proving themselves

keeps Andrew out of the headlines for a while..

Besides I hear he can't sweat either.

Many on Twitter referred to the recent Meghan Markle and Prince Harry saga.

I am sure the tabloids will blame Meghan for it, somehow..

Harry is doing the same, exploiting his status all the way round.

to be Britain's number 1 disfunctional family 🙄

Hypocrisy is their middle name

They’re pretty damn far from having a golden reputation. They need to put an end to Royalty. It’s so ridiculous and insulting.