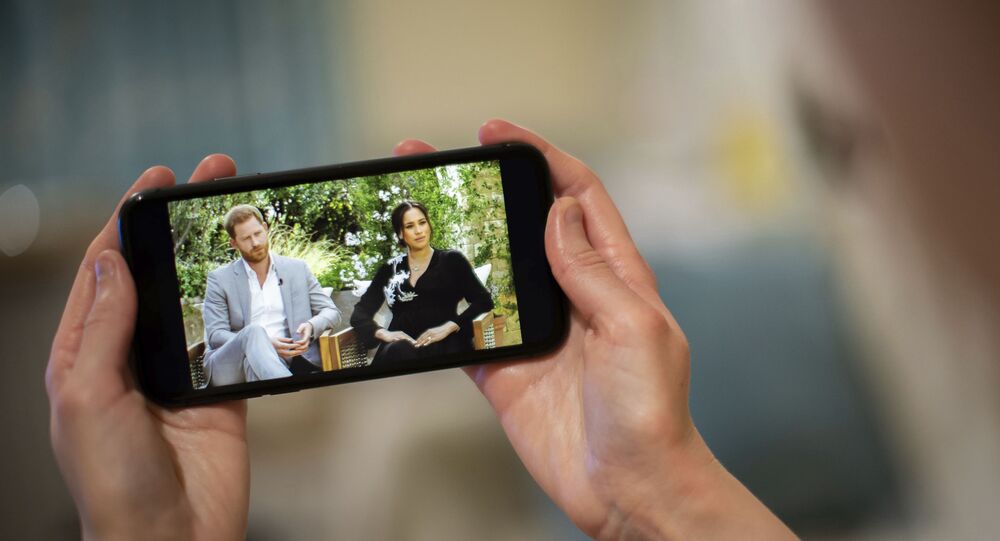 This comes despite Harry telling US legendary TV host Oprah Winfrey in the couple's explosive interview last month that no arrangements had been made and no plans were designed before the so-called Megxit was revealed last January.

Prince Harry and Meghan Markle allegedly said during a row with palace officials before leaving the Royal family that they "can't stop us from doing what we want" while negotiating a large sum contract with the US streaming platform, The Daily Mail reported on Saturday.

In particular, the Duke and Duchess of Sussex reportedly "called the shots" and advised press officers about what facts they thought could be made public, as, according to the report, it was a year before they stepped down as senior royals in January 2020 when they were in negotiations with the £1.3 billion-backed US company, Quibi.

The newspaper claims that from early 2019 until after they left as working royals, the Sussexes have met with Quibi, a now-defunct video streaming service, founder Jeffrey Katzenberg and its CEO Meg Whitman several times. Prince Harry even met with them in London after returning from the historic Sandringham summit, in which he announced their couple's decision to step back from their roles.

According to the report, an agreement for him to provide content on the platform was in the advanced stages but eventually fell through when the app, launched just at the beginning of the COVID-19 pandemic, failed to take off. The Duke held conference calls to negotiate a possible 10-minute video series.

The pandemic halted the plans, and by September, when the royal couple eventually signed a contract with Netflix, the streaming service was on the verge of going out of business.

More to that, even when Meghan Markle was a working royal, the report states that she continued to consult her US-based advisors, including her lawyer Rick Genow, business manager Andrew Meyer, talent agent Nick Collins, and publicist Keleigh Thomas Morgan. This reportedly irritated aides in Buckingham Palace, who were having trouble keeping track of the couple's commercial deals.

© AFP 2021 / STR
Markle 2024? Harry and Meghan Reportedly Hire Hillary Clinton Aide Involved in 2016 Campaign
In addition to the Sussexes signing a multi-million dollar contract with Netflix, the royal couple had announced a deal to produce podcasts for Spotify three months later, all because of Harry's family cutting them off financially, as the British price had to "afford security for us."

In the March 7 interview with Oprah, they both claimed that "the Netflix and the Spotify [deals]… that was never part of the plan."

Earlier, Harry also announced he was taking two jobs at US businesses, with one being an executive position at BetterUp in California, where he will be working as a 'chief impact officer."

According to the report, Prince Harry may be residing in the United States on a visa reserved for people with "extraordinary ability." However, following the birth of their daughter in the summer, he and Meghan have already planned some time away from their roles, with a source revealing that they "will both take some proper time off."

'Power of Broadcast TV': Report Reveals How Oprah Landed Interview With Duke and Duchess of Sussex

'Meghan is Obviously Confused': The Sussexes' Wedding Certificate Proves They Married at Windsor