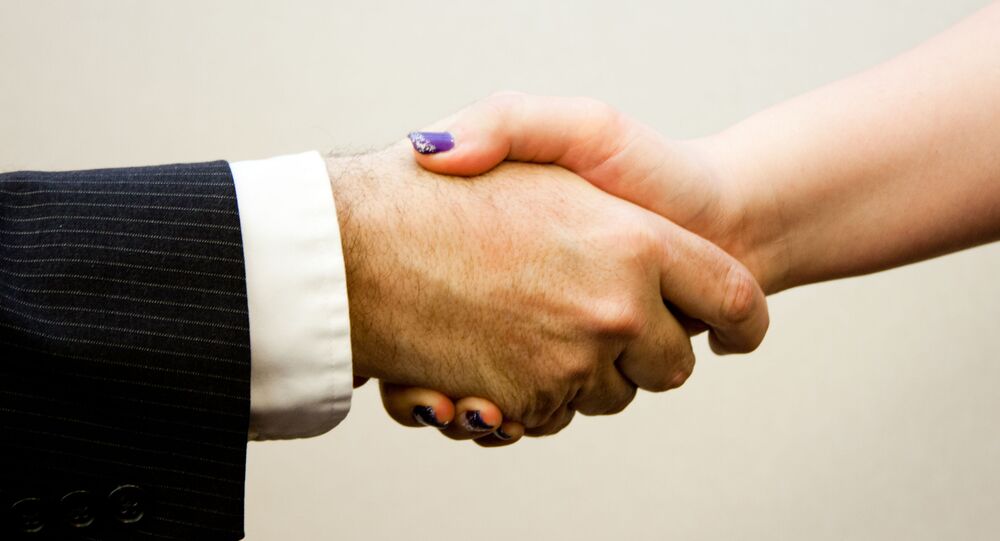 Not a Cultural Habit, But Part of Human DNA: Report Explains Why Humans Won't Give Up on Handshakes

With the coronavirus pandemic raging across the world, it might be reasonable to revise some of our basic customs of social interaction, as US coronavirus czar Anthony Fauci has advised: "we should never shake hands ever again." However, scientists may argue with that.

Even despite the fact that during the pandemic people have learned to greet each other by nodding their heads or banging their feet or elbows, the habit of shaking hands when meeting somebody will not vanish, since it is not a learned cultural behavior but part of our DNA, The Daily Mail reported on Thursday.

In her newly released book, The Handshake, reviewed by the newspaper, UK paleoanthropologist, evolutionary biologist and stand-up comic Ella Al-Shamahi comes to this conclusion by studying our nearest living relative, the chimp. Chimps shake hands, or to be more precise, fingers, in a variety of situations, including after a war to say, "Let's make up," just like humans.

According to the report, Al-Shamahi argues that, if both chimps and humans use the handshake, the action most likely started before the species split seven million years ago. This certainly brings us to the question: why, then, are there some countries where handshakes are not a part of the custom, such as Japan and Thailand?

The researcher reportedly suggests that this is due to "ancient epidemic events" in which contact became taboo and remained so.

The book author reassures that this case is unlikely to happen after the novel coronavirus pandemic, since such cultural traditions have been formed for centuries.

After all, the handshake has defied epidemics before: in 1918, according to the report, it was declared illegal to shake hands in Prescott, Arizona, due to the spread of the Spanish Flu. However, once the outbreak was over, people soon resumed shaking hands.

"Only the immediate fear of death or serious illness is enough to suppress our need to shake hands," Al-Shamahi concludes.

© CC BY 2.0 / Flickr / kishjar?
What Does a Weak Male Handshake Indicate? Research Finds Probable Cause of Limp Hand Grip
Handshakes, on the whole, convey greetings, consent, and approval. They can also change the world's mood, as Princess Diana demonstrated in 1987 by shaking the hand of an AIDS patient, at a time when HIV was a mysterious disease to the average person.

As noted in the report, the release of oxytocin, a social bonding hormone, activates "trust and protective" impulses, although it is also connected to increased fear of strangers. It essentially helps us to get a sense of who a person is.

Contact receptors are plentiful in our fingertips and palms, which is why elbow or fist bumps pale in comparison to clasping each other's hands.

UEFA Bans Pre-Match Handshakes in All Competitions Amid Coronavirus Outbreak