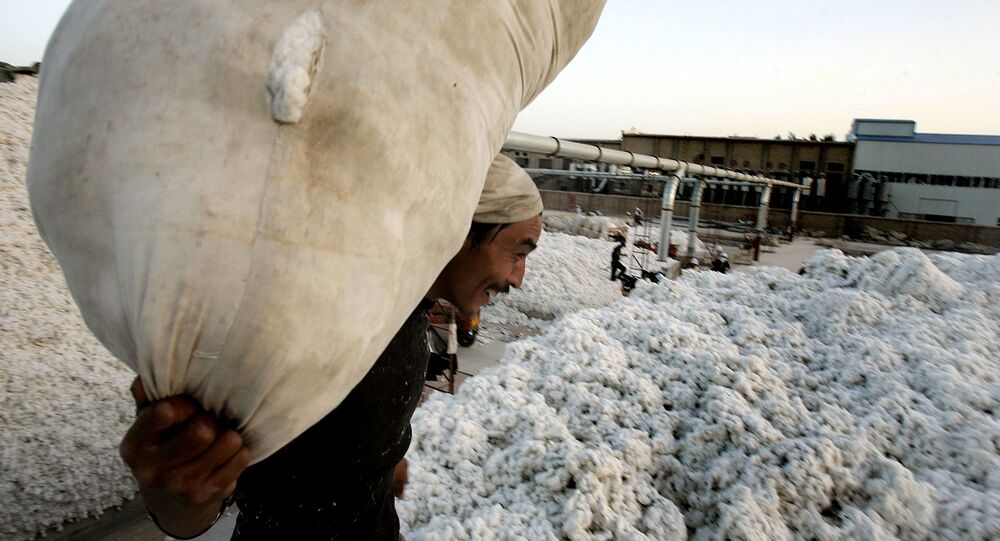 As the United States, European Union, Britain, and Canada have announced fresh sanctions on several Chinese officials over Xinjiang, China has pushed back against allegations that its Muslim minority in the region, where almost 90 percent of China’s cotton is manufactured, is being mistreated.

German luxury fashion house Hugo Boss is under fire in China after being accused of hypocrisy, reported the South China Morning Post.

Amid the boycott of major foreign clothing brands – which have vowed to stop using cotton from Xinjiang over allegations that Uyghurs are being used as forced labour – a Chinese subsidiary of the clothing giant seemingly broke with the stance of the company's headquarters in Germany.

The branch of the company that sells clothing, accessories, footwear, and fragrance reportedly used Weibo, the China's equivalent of Twitter, to allay concerns and extend assurances that it would “continue to buy and support Xinjiang cotton,” hailing it as among the best in the world.

At the same time, a statement denouncing forced labor was issued by Hugo Boss’ main office, noting that it has “so far” not procured “any goods” originating in Xinjiang.

In reference to the Weibo post, which had since been deleted, the brand dismissed it as unauthorised, according to Reuters.

However, on Saturday, the brand's Weibo account reiterated its long-standing relations with partners in China in a new post.

[trending] Li Yifeng, Zhu Zhengting, & Xiao Gui end contracts with Hugo Boss after Boss was found to have taken a different stance overseas on the Xinjiang cotton issue vs on Weibo, where they had posted they would continue to use Xinjiang cotton & stated belief in its quality pic.twitter.com/cLIuLcSFDA

​Actor Li Yifeng joined other celebrities in declaring they would boycott Hugo Boss.

In a similar attempt to save face and revenue, Italian sportswear giant Fila earlier spoke out against forced labor and threatened to review its business practices in China, while its Chinese subsidiary said on Thursday that it has always used cotton from the region, according to Fortune.

FILA, acquired in 2009 by Chinese company ANTA Sports, has also set about quitting the Better Cotton Initiative (BCI), an NGO that's been campaigning for companies to stop buying cotton from Xinjiang since 2015.

In an interview with Jiemian News, a spokesperson for BCI’s Chinese office reportedly said that the organisation’s China team never discovered human rights abuse in Xinjiang.

Many other foreign companies have since lost their Chinese brand ambassadors.

Firms such as Sweden's H&M, Japanese UNIQLO, Nike, and others have also come under attack from Chinese state media outlets for declaring they would stop sourcing cotton from the country's northwestern Xinjiang region, where China's Uyghur ethnic Muslim minority resides.

As reports of forced labor in Xinjiang have been slammed as blatant lies fed by anti-China sentiments, consumers have been urged to snub the brands in response to growing sanctions from Western countries, including the US, against Xinjiang, where almost 90 percent of China’s cotton is manufactured.

Had the Americans lived with slavery for too long that they want to associate everything with forced labor?! #Xinjiang cotton is best of the best pic.twitter.com/5j3QqTIBza

On 22 March, the US, European Union, UK, and Canada announced sanctions on several Chinese officials over the situation in Xinjiang, following allegations of human rights violations against the region’s Uyghur Muslims, with purported abuses ranging from forced labour to mass detention in internment camps, forced sterilisations, and restrictions on religious freedoms.

The U.S. is designating two People’s Republic of China officials under our Global Magnitsky sanctions in connection with serious human rights abuses in Xinjiang. We stand united with the UK, Canada, and the EU in promoting accountability for those who abuse human rights.

​China rejects all allegations that its Muslim minority is mistreated.

Beijing has been insisting that Uyghurs attend vocational education and training centres as part of a de-radicalisation programme seeking to integrate them into society.