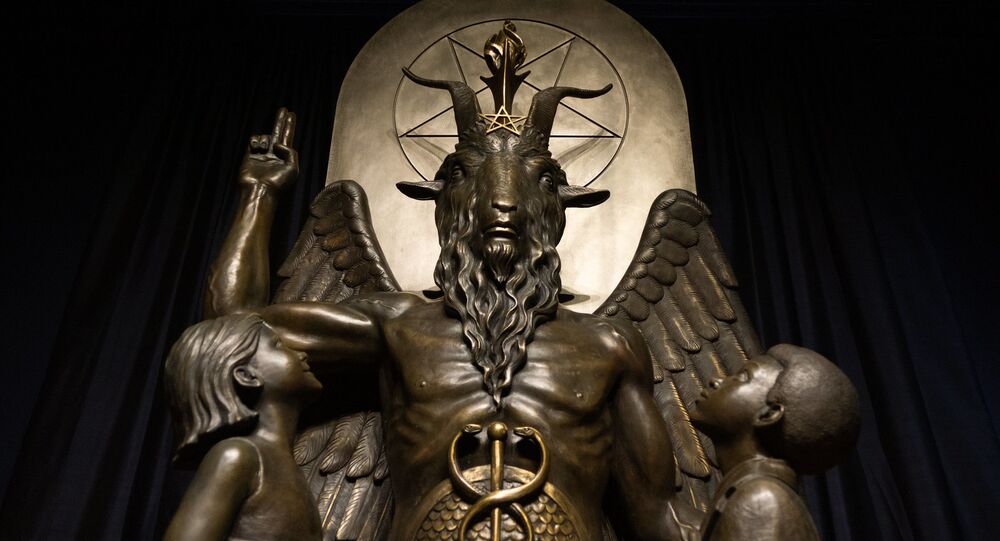 Should the atheist group, the Satanic Temple, have its way, the Arkansas state capitol will become home to a winged goat idol, placed beside a monument to the Ten Commandments, while Minnesota will come into possession of a new landmark – a statue that is "overtly" but "tastefully Satanic".

The Satanic Temple, a non-theist church with roughly 300,000 followers, is waging a legal battle across the US for religious liberty, to effectively be on par with Christians, the church declared.

The church that preaches empathy simultaneously with "freedom to offend" should a struggle "for justice" require this, has filed seven lawsuits in different states challenging the concept of religious freedom and its underlying features, demanding equal treatment with Christian groups in the public domain.

"People get a laugh when they see us fighting to put a Satanic monument on the same grounds as the Ten Commandments, but whether we succeed or fail is not of minor importance", Lucien Greaves, who co-founded the church in 2013, said, as cited by Bloomberg.

He says their goal is simple and very much in the American spirit.

"You can't give preference to a specific religious viewpoint and also say we're a nation of religious liberty", Detroit-born Greaves, who is currently living in Massachusetts, said, adding: "Religious liberty was never meant to apply to one viewpoint".

In its most recent lawsuit, in Texas, the Satanic Temple seeks to have some abortion rules deemed unconstitutional when applied to any of its members insisting that the rules - which include requiring a woman to have a sonogram and view the results - interfere with her religious beliefs.

Separately, in Arizona, the organisation hopes to revive a suit that seeks the right to offer their own prayer at the start of a City Council meeting, while in a Boston case, the church charged that Muslims and Jews were also overrepresented in prayers at City Council meetings due to them being, unlike the non-theists, "safe and familiar" to council members.

In Minnesota, the group has sued to set up a statue they refer to as being "overtly Satanic", albeit "tastefully so".

Similarly, in Little Rock, Arkansas, the Satanists are involved in a lawsuit by secularists seeking to remove the granite Ten Commandments monument on grounds that it ostensibly violates the Establishment Clause of the First Amendment by allegedly favouring one religion over all the rest. For equal terms, the church wants to put up its angel-winged goat, Baphomet, to commemmorate people killed in witch hunts (the original kind) alongside the Christian monument.

State authorities, however, have fought to keep the Satanic Temple out of the suit, dubbing it a "notoriously-transparent" front for "trolling". The court filing also quoted the Satanic Temple's rival, the Church of Satan, which has fumed that the Temple's devotees tend to lack real religious beliefs and instead give Satanism "a bad name".