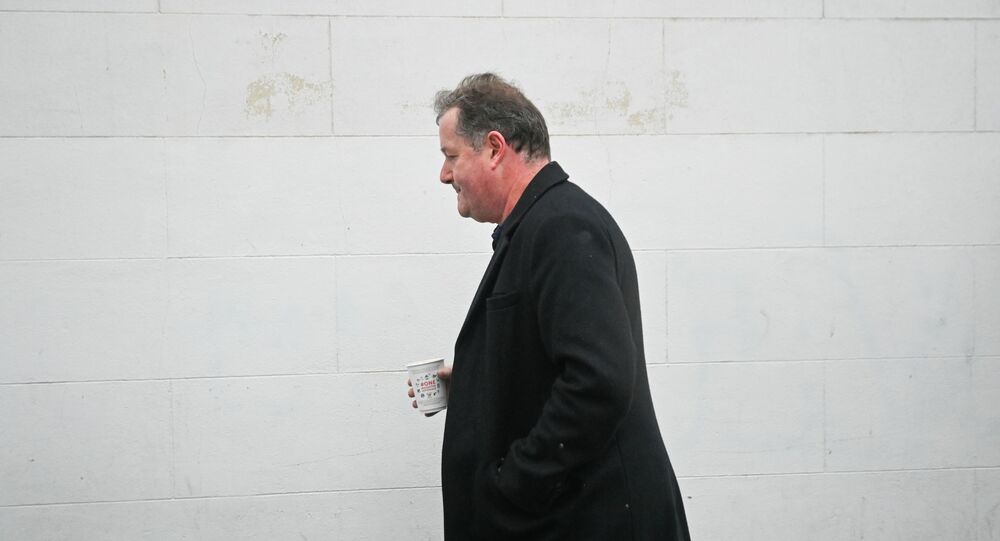 From Love to Hatred: How Piers Morgan's Relationship With Meghan Markle Evolved Over Time

On Tuesday, the British journalist quit Good Morning Britain after his remarks about the bombshell interview Prince Harry and Meghan Markle gave to Oprah Winfrey sparked more than 40,000 complaints from viewers and an investigation by a government agency.

From musicians, writers, and football players, to actors, journalists, and politicians (including Prime Minister Boris Johnson), over the course of his career, Piers Morgan has criticised countless people, but his biggest beef appears to be with Meghan Markle.

"Princess of Victimhood, contemptible, vapid wastrel, deluded, social climber, Duchess of disingenuousness", this is a small part of what the journalist has said about Markle over the years.

One may find it hard to believe, but Morgan heaped praise on her when they first became acquainted. Here are the highlights of Piers Morgan's love and hate relationship with Meghan Markle.

According to Morgan, the two started communicating in 2015. The journalist followed several actors from the TV series Suits, where the would-be-royal also starred. Speaking on The Late Late Show, Morgan said that Meghan Markle had texted him and even said she was "a big fan" of his and "excited" that he had followed her on social media. The TV host said that the two then started chatting regularly together with other Suits' actors and privately.

Markle even sent him "early copies" of the show’s episodes, Morgan claimed.

"She had emailed me from places, like Rwanda. I thought we had good sort of friendship building", the TV host said.

Then the Two Met Each Other…

According to Morgan, that same year she suggested the two should meet for a drink when Meghan came to London to watch her friend the legendary tennis player Serena Williams play. The two then went to a pub near his home and had a good time. Morgan claims that after the meeting he put her in a taxi, which took her to a party, where she first met Prince Harry.

…and Morgan Was Charmed by Meghan

His first articles about her were filled with compliments and praise.

"I found her to be a very smart, focused, thoughtful, feisty and confident woman … I really, really liked her", the journalist wrote in 2016.

Later that year, he described her as the "perfect princess material" and said that if he were Harry he would hurry up with his proposal as it is unlikely he would find a better bride.

He Continued to Show Support

Even when the rest of the British press started speculating about Meghan’s relationship with her estranged father Thomas Markle and her half-sister Samantha, Piers Morgan continued to back Meghan. He chastised Thomas for his decision to speak to tabloids about his relationship with the soon-to-be royal, while defending Meghan for not inviting her father and half-sister to the wedding.
"If someone trashed the woman I was going to marry, they'd have less chance of getting an invite than Kim Jong Un".

Things Started Changing After the Wedding

However, Morgan changed his tone after Meghan married Prince Harry in 2018. He started criticising her for her reported intention "to fight for feminism". Morgan wrote that lecturing people on equality would be difficult when "servants fluff your gold monogrammed pillows and your chauffeur warms up the fleet of vintage Rolls Royces".

Then he made a U-turn on Meghan’s father and urged her to call the “loving” Thomas and reunite with him.

That same year, he revealed that the Duchess had "ghosted" him (cut off all communication without explanation).

"I really liked her. This is why it hurts", Morgan revealed on The Late Late Show.

The TV host claimed the other Suits actors had also ghosted him, with Morgan going on to call Meghan “a social climber”.

"[One suits actor] popped up after the wedding, which he was at. I saw him on TV. I thought: 'really? Not a word from either of you'. And then he pops up apologising and saying 'I’m so sorry, I hope you understand'. Well, I didn’t understand", Morgan said.

He then claimed that the actor "was told to ghost him as well".

…And Then Came Megxit

The TV host continued criticising Meghan, but his remarks looked like a mild admonition compared to what he would say when the Duke and Duchess announced their decision to step down from their senior roles in the royal family in order to work to become financially independent.

Morgan rained fire and fury on the two royals, whom he described as "a pair of spoiled, entitled, hypocritical brats, who decided to hold the Queen and Monarchy to ransom".

He called Meghan "shameless" and claimed the move was a planned campaign to make Harry "ditch" his family and accused her of attempting to destroy the British monarchy.

After that, not a week went by without the media reporting on Morgan’s attacks on the couple in general and Meghan in particular.

Things culminated after Prince Harry and Meghan Markle gave a tell-all interview to US talk show host Oprah Winfrey. During the two-hour conversation, the couple made several sensational claims. Meghan alleged the palace was perpetuating falsehoods about them and claimed one member of the family had been concerned about the potential dark skin of their firstborn Archie.

Morgan described the interview as a "disgraceful betrayal" as well as a "whine-athon", calling Meghan Princess Pinocchio.

Many British viewers didn’t like the remarks he made during Tuesday’s episode of Good Morning Britain and complained to the Office of Communications, which prompted Morgan to step down.