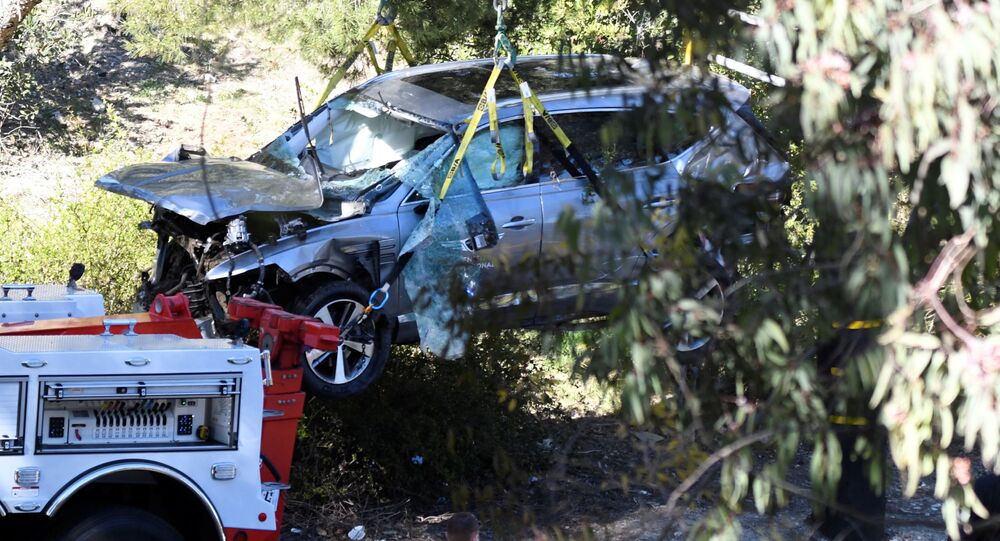 As investigators try to ascertain why Tiger Woods lost control of the Genesis sport utility vehicle he was driving on 23 February as he negotiated a ‘notoriously dangerous’ downhill stretch of highway, Los Angeles County Sheriff Alex Villanueva told a news briefing the legendary golfer will not face criminal charges over the car crash.

As investigators probe the reasons behind the horrific car crash involving Tiger Woods, the focus at present is said to be on the "black box" computer, located in the luxury SUV that the golfing legend was driving on the fateful day in southern California, Reuters reports.

The Los Angeles Sheriff’s Department has already prepared itself with a search warrant to pull data from the "black box" in the 2021 Genesis GV80 which could reveal Woods’s steering, braking or acceleration actions “prior to impact”, according to a report on Tuesday.

Tiger Woods will not face criminal charges in the car crash that left him with serious injuries, the Los Angeles County Sheriff said https://t.co/O7F2EVnOxK pic.twitter.com/4Ds4TQeABx

Earlier, authorities said that the world’s most famous golfer, who has a history of car accidents, will avoid reckless driving charges in the crash that took place on 23 February.

"A reckless driving charge has a lot of elements in it; this is purely an accident,” LA County Sheriff Alex Villanueva told reporters.

It was added that there was no evidence to indicate the golfer was intoxicated by drugs or alcohol.

​Woods, who has won 15 major championships and boasts a record-tying 82 victories on the PGA Tour, suffered "multiple injuries", including a fractured right leg and shattered ankle, after being involved in a single-vehicle roll-over collision on the border of Rolling Hills Estates and Rancho Palos Verdes.

© REUTERS / MARIO ANZUONI
The overturned car of Tiger Woods is seen after he was involved in a car crash, near Los Angeles, California, U.S., February 23, 2021. REUTERS/Mario Anzuoni

Woods, 45, was said to be in "good spirits" as he underwent treatment at Cedars-Sinai Medical Centre in LA, according to a statement posted to the athlete’s Twitter account, where he also expressed profound gratitude to fellow PGA Tour players for their "touching" gesture of wearing his signature red and black colours during a series of tournaments.

​This will not be the first setback for Tiger Woods, who has been elected to the World Golf Hall of Fame, and is known for his comebacks despite several operations on his back, among other health issues.