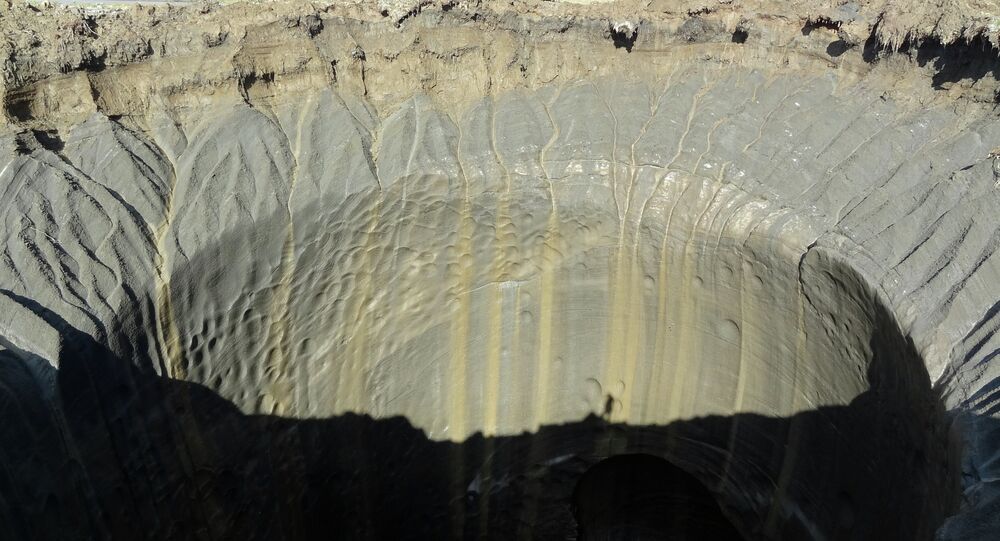 Numerous pockmarks dot the bottom of an extensive range of Siberian rivers and lakes, which researchers explain as being due to large-scale degassing. The latter, they say, is intrinsically linked to rising temperatures.

Researchers believe they have solved the riddle over a gigantic crater that mysteriously emerged in Western Siberia last year. A study published in Geosciences by a team of Russian researchers suggests that an explosion of vast amounts of methane underneath the Earth’s surface is responsible for the formation of the enormous 20-metre wide and 30-metre deep sinkhole. Images of the so-called "blowout crater", numerous of which were taken by drones specially flown to the location, were then reconstructed with the help of 3D modelling so that the scientists could analyse its shape and structure in minute detail.

The study says that warming in the Arctic leads to the degradation of permafrost, which causes an increase in gas emissions into the atmosphere, further facilitating the ongoing process of climate change.

“Intensive gas emissions from permafrost were observed in the Russian Arctic in the north of Western Siberia especially on the Yamal and Gydan Peninsulas”, the paper has it, saying that in 2014-2020, specialists from the Oil and Gas Research Institute of the Russian Academy of Sciences (OGRI RAS) carried out in-depth studies of the onshore and offshore degassing processes (lakes, rivers), including the distribution of thermokarst lakes.

It sums up that at the bottom of them, direct signs of degassing were revealed in the form of numerous crater-like objects—pockmarks. The degassing has led to the formation of “craters of gas emissions” at the bottom of over 1,667 thermokarst water reservoirs.

Separately, a regional connection was established between the identified degassing zones and areas of increased methane concentration in the air, as recorded by the TROPOspheric Monitoring Instrument (TROPOMI) spectrometer on the European Space Agency's (ESA) Sentinel-5p satellite.

During the first 20 years after its release, methane, a greenhouse gas, is 84 times more potent than carbon dioxide, another harmful gas in terms of its impact on climate change. Both are released as a result of thawing in certain regions of the Arctic permafrost – vast stretches of land that remain frozen throughout the year, with soil layers warming up a bit, enough for microbial life to wake up and decompose organic matter.

Even frozen ice crystals contain methane molecules, but they are not released until the ice melts. In Russia, roughly two-thirds of its land territory is covered in permafrost, which can be up to 1,500 metres deep in some areas of Siberia.

Scientists remain uncertain about how much methane and carbon dioxide could be released if vast amounts of permafrost begin to thaw, but they put it preliminarily at several billion tons, which could be translated into a warming of 1.5°C by the year 2100, as per the most optimistic forecasts.

In more worrisome scenarios, there could be warming of 5°C, while “the rapidly warming and thawing Arctic can have severe consequences for Arctic residents and globally”, Susan Natali, Arctic Programme director at the Woodwell Climate Research Centre and co-author of the study, warned. Touching upon the aforementioned blowout craters and hazards they could be indicative of, she stressed that they “represent a...process that was previously unknown to scientists”.

Since 2013, as many as 17 such craters have been spotted across Siberia's Yamal and Gyda peninsulas, which raises questions about the geographic scale of the phenomenon and its potential impact on the geological build-up in the area.