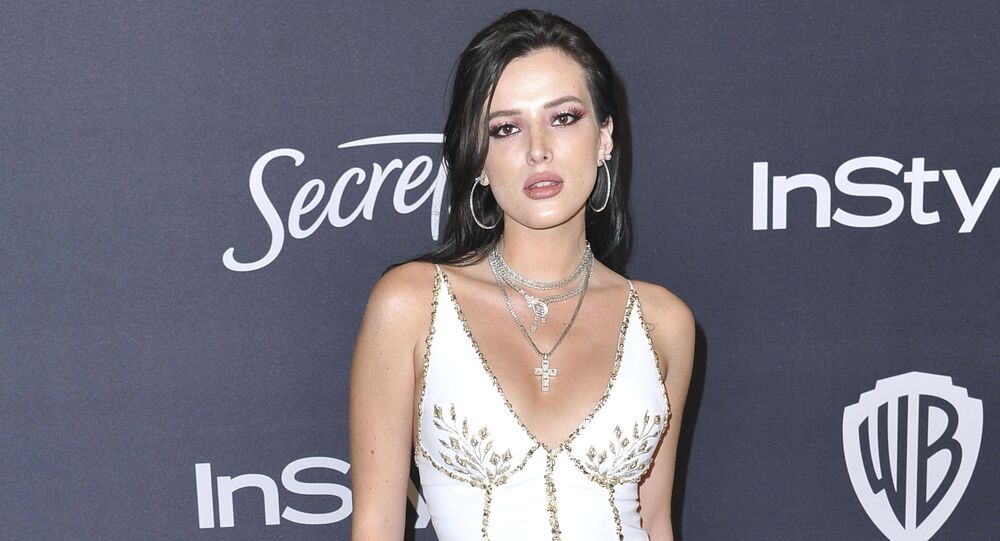 Bella Thorne 'Disgusted' by Mistreatment of Britney Spears, Saying 'We're All Part of This'

The singer and former Disney star, who like her colleague Britney Spears shot to fame in her teens, has shared her impressions after watching the new documentary about the early years of the "Toxic" star's career and the challenges she later faced.

Bella Thorne has thrown her weight behind Britney Spears as concerns have mounted still further about the pop star and her well-being. Speaking to Fox News in an interview to promote her new single "Shake It", the 23-year-old Thorne also shared her views on Spears' case after watching the recently released and now viral documentary "Framing Britney Spears".

"It was so sad when I watched it", Thorne said of the docu, claiming everyone has a role to play in all of "this".

The singer and acting star, who herself was thrust into stardom as a teenage girl, first as a model before her debut on "Shake It Up" on the Disney Channel, said she could well relate to the hardships Spears had endured both in her personal and creative life.

"By the time I was 14 I was very famous and there was paparazzi, people constantly looking at me and trying to touch me and insert themselves around me, around my life", Thorne recalled, fuming:

"Fake people, real people, all kinds of people including the public judging me for everything that I do".

She expressed a great deal of empathy as she stressed she "definitely relates to the male misogyny that is placed on all of us, in us women", explaining that she has never stopped being on the receiving end of slut shaming, just like Spears is.

Thorne said "of course" she's a supporter of the #FreeBritney movement, and was so long before it started trending on social media, as the public expressed disbelief about a person, who is absolutely capable of running huge shows on stage, being cared for and controlled in every step she makes by someone else.

The singer and actress also shared what she thought should be done amid the renewed interest in Spears' conservatorship court battle and past highs and lows.

"Let's #FreeBritney all day. I think everyone should go and apologise to her all over social media and say, 'We're sorry. We're sorry we did this to you. We're sorry we put this on you. We see you now. We're here and we see you'", Thorne added.

She stressed how childhood stardom could be downright overwhelming, saying Spears has suffered far greater than anyone could imagine.

"Even if you didn't do anything to [Britney], you talked about her with your friends, you heard about those photos of her hitting that car, someone made a joke in a group -- we're all a part of it. That makes it so much more incredulous", Thorne said of the public mocking the "Baby One More Time" singer received.

Under her conservatorship, which formally took effect after Spears' notorious nervous breakdown in 2007, the star continued performing on stage and making millions, but her father remained the sole guardian of her wealth, including real estate. He took a short break in 2019 over reported health issues before continuing in the role.

The new documentary film, released by The New York Times, gives an in-depth look into what was going on behind the scenes during the pop diva's meltdown years ago, in which she hit a photographer's car with an umbrella and had her head shaved, setting tongues wagging.

Thorne asserted that it's now obvious that Spears was simply a mother who "just wanted to see her f*****g kids". "If anyone would have known that behind these photos it would have been a different situation", Thorne lamented.