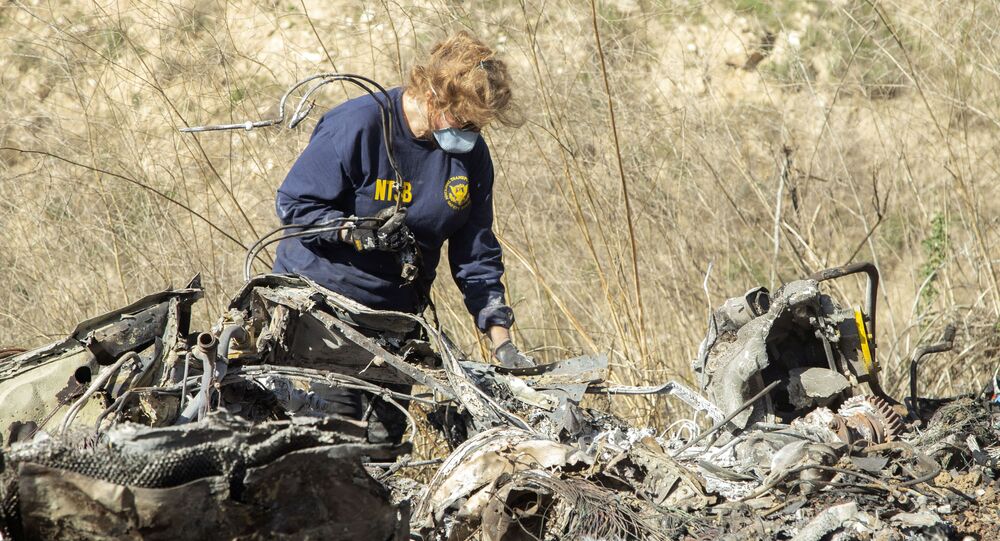 On the morning of January 26, 2020, basketball legend Kobe Bryant, his daughter Gianna and seven others aboard a Sikorsky helicopter died after severe cloud coverage prevented pilot Ara Zobayan from safely navigating through California’s San Fernando Valley. The deaths prompted multiple lawsuits and countersuits.

Officials with the US National Transportation Safety Board (NTSB) revealed on Tuesday that the pilot, Zobayan, suffered an episode of “spatial disorientation” during the doomed flight, highlighting that the condition played a key role in the devastating crash.

The revelation was made during a hearing to pinpoint the cause of the accident, months after investigators determined that the helicopter Zobayan was flying had not undergone a mechanical failure.

Spatial disorientation occurs when an aviator is unable to correctly interpret an aircraft’s altitude, attitude or airspeed in relation to the ground or other points of reference. Federal regulators acknowledged during the hearing that the condition often occurs with pilots flying in low visibility, as Zobayan was doing at the time of the accident.

© AP Photo / Marcio Jose Sanchez
Kobe Bryant's No. 24 is placed along a trail leading, Tuesday, Jan. 26, 2021, in Calabasas, Calif., leading to the site of a helicopter crash that killed Bryant, his daughter Gianna, and seven others one year ago.

NTSB Chairman Robert Sumwalt described spatial disorientation as “the powerful, misleading sensations that can confuse a pilot conducting a visual flight who loses visual references, and what types of training can be effective in countering this effect."

Zobayan served as chief pilot for Island Express Helicopters, having accrued some 8,500 hours of flight experience over his 10 years of flying within the Golden State; however, despite Zobayan’s flight expertise, investigators determined the pilot went against his training and violated flight rules when he opted to fly through heavy cloud coverage instead of waiting out the bad weather.

At the time, Zobayan was flying under visual flight rules that “legally prohibited” him from flying through terrain in which he could not visually navigate his flight plan, Sumwalt noted.

NTSB investigator Bill English noted amid the hearing that Zobayan had informed air traffic controllers that he was “climbing to 4,000 feet” in an effort to get above the cloud coverage, but that since he was experiencing spatial disorientation, the chopper was actually banking to the left and descending.

Breaking down Zobayan’s misperception even further, specialist Dr. Dujuan Sevillian told the hearing that the pilot’s belief that he was climbing when he was descending is a sub-condition known as somatogravic illusion.

© AP Photo / Marcio Jose Sanchez
FILE - In this Jan. 26, 2021, file photo, Anthony Calderon wears a Kobe Bryant jersey in Calabasas, Calif., at the site of a helicopter crash that killed Bryant, his daughter Gianna, and seven others one year ago. Federal safety officials are expected to vote Tuesday, Feb. 9, 2021, on what likely caused the helicopter carrying Kobe Bryant, his 13-year-old daughter and seven others to crash into a Southern California hillside last year, killing all aboard.

“Our inner ear can give us a false sense of orientation,” Sevillian said, underscoring that poor visibility only worsens the severity of spatial disorientation that a pilot can suffer.

Officials further indicated that it’s unclear why Zobayan opted to disregard flight rules in favor of flying Bryant and company to the Mamba Sports Academy, since it did not appear as though Bryant or anyone else in the travel party pressured him to conduct the flight. It is speculated that Zobayan may have placed himself under “self-induced pressure” as he had become friends with Bryant.

NTSB officials stated that between 2010 and 2019, there were 184 aircraft crashes in which pilots were suffering from spatial disorientation. Twenty of those incidents involved helicopters.

NTSB member Michael Graham stressed that as long as chopper pilots continue flying into heavy clouds without relying on navigation instruments, “a certain percentage aren’t going to come out alive.”

While the NTSB does not have enforcement power, the government agency is likely to make a variety of nonbinding recommendations in an effort to prevent similar crashes; however, it’s worth noting that past guidances have been rejected, after other disasters unfolded.