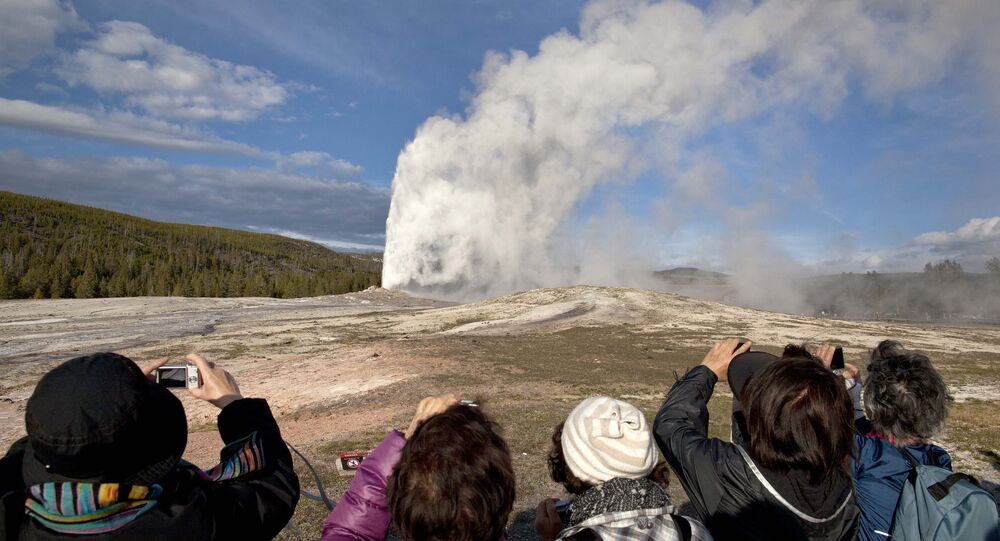 Yellowstone Volcanoes Have Been Around For at Least 50 Mn Years, Scientists Say

Growing chemical and geological evidence suggests that the Yellowstone hotspot, the heat source that drives masses of magma and ash upwards in the iconic national park, could have been active well before previously claimed.

The source of the heat that powers the landmark volcanic system at Yellowstone National Park in the western US dates back to at least 50 million years ago, although it has hitherto been believed that the famed volcanoes are not older than 17 million years, scientists with the United States Geological Survey (USGS) say.

The geologists claim there are chemical and physical traces of the Yellowstone hotspot, as the heat source of the volcanic system is commonly referred to, in the ocean waters off the Pacific Northwest Coast. It is hundreds of miles away from Yellowstone, a wildlife area that has historically drawn crowds of tourists.

As the North American tectonic plate gradually moves to the southwest over the hotspot, described by the USGS as a plume of hot material that connects the volcano with the depths of our planet, the centre of volcanic activity appears to be edging more to the northeast. Yet researchers consider the Yellowstone hotspot stationary, as compared to the moving tectonic plates below the Earth’s crust.

“As hot material rises buoyantly, it decompresses and melts near the surface, generating magma that feeds the magma chambers beneath Yellowstone and provides the heat that powers the many geysers and hot springs", the researchers said.

One of these is Old Faithful, Yellowstone National Park's famous geyser, which has continuously been erupting and sending jets of boiling-hot water into the air every 44 to 125 minutes for the last 800 years.

As the heat source moves, it leaves behind “a trail of volcanism” that gets older and older, dubbed “essentially ancient Yellowstones”, some of which were responsible for “especially powerful eruptions”.

The USGS says the start of the trail is marked with the 17-million-year-old McDermitt volcanic system and others of the same age in northern Nevada and southern Oregon.

Although the trail then goes “cold”,  which explains the generally accepted 17-million-year estimate for the origin of the volcanic hotspot, scientists have noticed that some volcanic rocks, called “Siletzia terrane”, far off the coast of North America have almost the same geological build-up as those found at the place where the hotspot allegedly started moving. Now scientists are wondering how exactly the rocks were created.

“Sure enough, there are volcanic rocks of this age present in the Oregon and Washington coast range that that are chemically related to the older Siletzia rocks and younger Yellowstone hotspot products”, the USGS commented, remarking that about 20 years ago, the story might have been “dismissed as fantasy”.

Yellowstone National Park, a beautiful land of towering geysers, lush forests, and supervolcanoes, spans a staggering 3,400 square miles largely through Wyoming and Montana, but a tiny portion of the park dips into Idaho too.