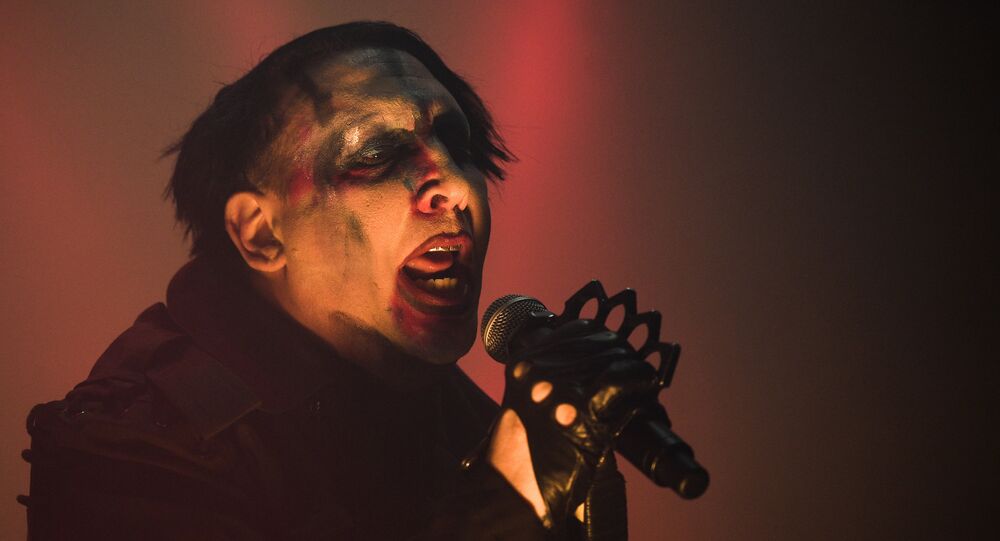 Admission of Guilt? Marilyn Manson Wrote in Biography He Had Exploited and Humiliated Girls

The singer was recently thrown into the media spotlight after his ex-fiancé, actress Evan Rachel Wood, accused him of abuse. Since then, 10 women have come forward with accusations against the rock star, with one of them alleging Manson had raped her.

Marilyn Manson wrote in his biography that he had exploited and humiliated girls, The Sun reported, citing excerpts from the book, called "The Long Hard Road Out of Hell”, penned by the singer in 1998. In one chapter, Manson, whose real name is Brian Warner, wrote that while on tour with Nine Inch Nails and Jim Rose he and his band members swore to "stop exploiting and humiliating girls backstage" and instead perform a "therapeutic service for them". The service in question was confessing on camera about their "deepest, most intimate sins".

In another chapter, Manson describes a chilling incident during which one of his fans almost choked when doing a bondage stunt.

"She released the pressure on her hands and legs and allowed [the] contraption to snap tightly around her neck. Her head hit the floor, unconscious. I bent down in a daze and began fumbling with the knots and rope, unable to do a thing as her face swelled from red to purple", the singer wrote.

According to Manson, one of the band members then pulled out an army knife and sliced through the cord trailing from the girl’s neck. However, this didn’t help.

"She didn’t wake up. We slapped her, screamed at her, dumped water on her. Nothing worked. This was bad. I didn’t want to be the first rock-and-roller to have actually killed a girl due to backstage hedonism. After three minutes, she groaned and blinked her eyes open. That was probably the last time she ever wanted to go backstage again", he confessed.

The acts mentioned in the biography are similar to those described by one of his accusers. Manson’s ex-girlfriend Gabriella, known as the artist SourGirrrl, claimed the singer had tied her up before raping her.

"He would tie me up for the first of many times and rape me. I sobbed on the floor in the hotel room and when I looked at him, he was smiling. He told me he knew that’s how I loved him because of my reaction. He took naked photos of me without my permission while I was sleeping tied up and sent them to his friends", Gabriella said.

In another chapter, Manson writes how he and a friend threatened to rape a girl who worked in a piercing studio because she didn’t pay attention to them.

"But she wouldn’t even acknowledge our humanity, no matter what part of our body we asked her to pierce. So I fell back on my usual deviant way of getting a girl’s attention: malicious, asinine behavior. At first, the calls were harmless. But they quickly grew meaner. 'We’re watching you', we’d threaten her at the height of our spite-masked lust. You better not leave work tonight, because we’re going to rape you in the parking lot and then crush you underneath your own car", the singer wrote.

The rock star also revealed that he planned to kill his band member named Nancy. Manson writes that after the woman was kicked out of the band, she wanted to get revenge on the singer and started calling clubs to cancel his shows. She also appeared at gigs and attacked the girl who replaced her.

And although Manson wrote that it is wrong to "take a human life", he and his friend planned to kill the woman.

"This was the first time I had ever seriously considered murder. I wasn’t sure what to do…" he wrote

The singer claims he filled a shoulder bag with "kerosene, matches and rags", but he and his friend made a U-turn when a witness noticed them and police cars drove by.

Incidentally, this is not the first time that Marilyn Manson has spoken about his aggressive behaviour. Commenting on his split with actress Evan Rachel Wood, who was the first woman to accuse him of sexual and physical abuse, he said he called her 158 times after they broke up while self-mutilating.

"I wanted to show her the pain she put me through. It was like, 'I want you to physically see what you've done'", he said in a 2009 interview with Spin magazine, adding that he had "fantasies every day about smashing her skull in with a sledgehammer".

After 11 women came forward with accusations, Manson was dropped by his record label and edited out of two TV shows. The singer has denied the accusations.