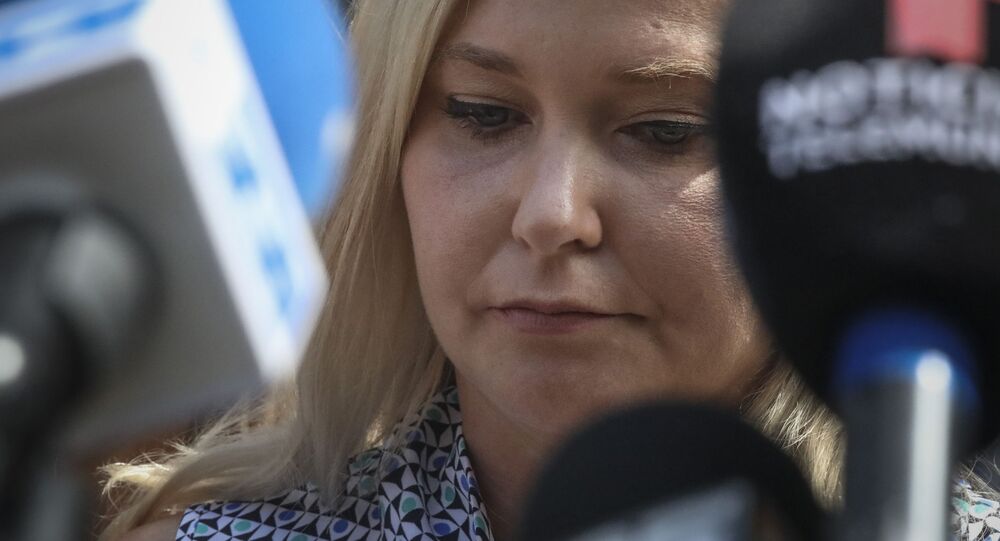 Jeffrey Epstein’s alleged victim Virginia Roberts Giuffre maintains that the late financier had forced her into a sexual relationship with British royal Prince Andrew on at least three occasions when she was under 18. As evidence, she provides a photo featuring her alongside the Duke during one of their purported encounters.

Advisers for Prince Andrew and his ex-wife Sarah Ferguson have reportedly reached out to Molly Skye Brown, a former model who emerged as an occasional critic of Virginia Roberts Giuffre on social media, in a “desperate” attempt to discredit the duke’s accuser, a report by the Mail on Sunday claims.

Roberts Giuffre says that she was sex trafficked to Prince Andrew by Epstein on three occasions, the first time being in London 2001 before she turned 18. She cites the photo of them together, allegedly taken by Jeffrey Epstein on the occasion that also features his associate Ghislaine Maxwell in the background. The Duke denies these claims, suggesting that the viral pic showing his hand around the young Virginia’s waist could have been doctored.

Brown, who was dubbed a 'Twitter Troll' by the Mail, is said to have published a series of tweets last year, calling Prince Andrew’s alleged victim a “thug” and suggesting that the image in question was faked. According to the 42-year-old former beauty queen, she was then contacted by Ms. Antonia Marshall, an aide of Prince Andrew’s former spouse Sarah Ferguson.

Ms. Marshall reportedly thanked Brown for “online support” and asked the woman whether she “had time at some point for a quick chat” with regards to her post “about the photo of the Duke being edited/doctored”.

The two then had an exchange of messages on WhatsApp and a “lengthy” talk, the report says. The adviser also allegedly suggested organising a meeting between Brown and the Duchess of York to then pass on a greeting to Prince Andrew’s mother, Queen Elizabeth II.

“We are all one big family and see each other all the time,” Ms. Marshall was quoted as saying.

At one point, she has reportedly elaborated on the idea that a “spy” Twitter account could be set up to dig up information about Epstein’s alleged victims. According to the media, Ms. Marshall then moved to introduce the woman to Prince Andrew’s PR expert Mark Gallagher.

The man had allegedly sent a message to the ex-model, saying that he was interested in discussing with her “the important distinction” she has apparently drawn with her comments “between survivors and – in effect – enablers”.

Brown, who maintains that she was at one point nearly recruited by Epstein’s ex-girlfriend Ghislaine Maxwell as a masseuse at the age of 14, calls now-married Virginia Roberts Giuffre an “enabler” for the disgraced financier’s abuses.

According to Brown's cited comments, she had given the aides for the Duke and Duchess of York all the “evidence” she had about the photo in question being “doctored” but then sent out all the email exchanges with the advisers to the FBI.

The Duke’s representatives have declined to comment on the issue and support or reject the claims when approached by the media. The report argues that Ms. Marshall does not have a similar “recollection” of her exchanges with Brown, who called an attempt to bring her into the story “desperate”.

After the Daily Mail story was published, Molly Skye Brown shared the article under caption “Cool story. Media is so corrupt. The evidence I provided vs what was written.. Fantastic.”

‘Nobody Can Prove That Photo Has Been Doctored’

During BBC’s Newsnight interview in November 2019, Prince Andrew famously rejected Virginia Giuffre Roberts claims that the two had had sex three times between 2001 and 2002. He told the media that he has “no recollection” of ever meeting the woman and suggested that their photo together could have been edited – although he said that “nobody” could prove that the pic “has been doctored”.

“I don't believe that photograph has been taken in the way that has been suggested,” the Prince said on camera.

The digital experts who studied the picture say that nothing suggests that it has been edited in any way.

During the interview, the Prince famously disputed Virginia’s claims of going to the Tramp club together before having a sexual encounter, saying that he had spent the day visiting Pizza Express in Woking, a town nearly thirty miles away from London.

But the Duke’s claims, as well as his defence of friendship with sexual offender Epstein during the interview prompted a severe backlash from the public.

In November 2019, Queen Elizabeth’s son announced that he would step down from his official duties to allow for the public storm to calm down.

He was also slammed for the past year by US authorities for failing to provide cooperation in relation to the probe into Epstein’s sex trafficking crimes. But the duke’s legal team said that he was always there to give authorities all the information he had.

Buckingham Palace’s official position on the issue is that Prince Andrew did not have any sexual relationship with Virginia Roberts Giuffre and “any claim to the contrary is false”.