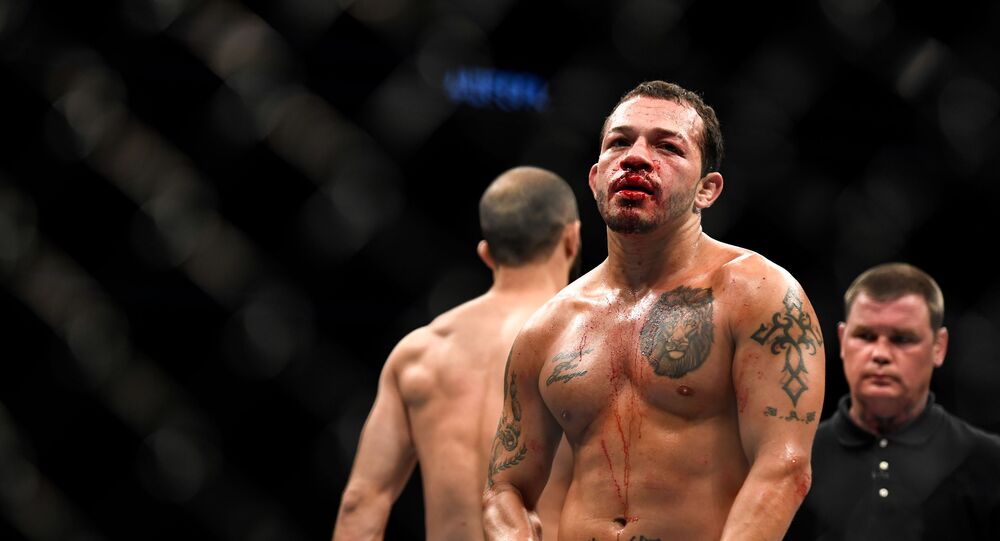 UFC's Rivera, Charged With Attempted Murder of His Sisters, Says 'Higher Power' Forced Him to Do It

Irwing Armando Rivera, 31, is a Mexican mixed martial artist who competed for Titan FC and Combate American before eventually signing a contract with UFC last year, where he was fighting in the bantamweight division.

UFC fighter Irwin Rivera, also known under the alias "The Beast", has been arrested on suspicion of attempted murder of his two sisters in West Palm Beach, Florida, TMZ Sports reported Friday.

According to the report, citing a law enforcement document, the police officers came to a scene in Boynton Beach, where they discovered a young woman on the roadway and another woman inside the home, both covered in blood, reportedly suffering from stab wounds.

The officers found Rivera later in clothes covered in blood, and the fighter admitted to stabbing the women, uttering that he "killed his sisters", and that he did it because "it was his purpose, which he was told to by a higher power", according to the report.

UFC member was taken into custody without bail and charged with two counts of first-degree premeditated murder, according to the outlet. Rivera is currently awaiting a court hearing.

UFC officials issued a statement regarding the incident.

"UFC is aware of the recent incident involving Irwin Rivera and subsequently received information from his management that he has been exhibiting behavior consistent with mental health issues," the UFC said in the statement.

"The allegations are extremely troubling and the organization is currently gathering additional information. The investigation is ongoing and any potential next steps including disciplinary action or medical attention will be determined upon the conclusion. Furthermore, UFC has informed Rivera’s management that he will not be offered a bout at this time", the statement follows.

Rivera's manager, Ali Abdelaziz, who is also the manager of UFC star Khabib Nurmagomedov, stated that the fighter is suffering from an unspecified mental illness and the crime incident "was not in Rivera's hands".

"His sisters are in stable condition and I am praying for his family. We are still trying to put the pieces together. I will never give up on Irwin and his family", Abdelaziz added.

Rivera fought only three times with the UFC in 2020, most recently on September 19, when he lost a split decision to Andre Ewell.

The Mexican fighter was scheduled to fight his next match at UFC Fight Night in March.

In total, Rivera, fighting as a bantamweight, had 16 fights in mixed martial arts, with 10 wins and 6 losses.