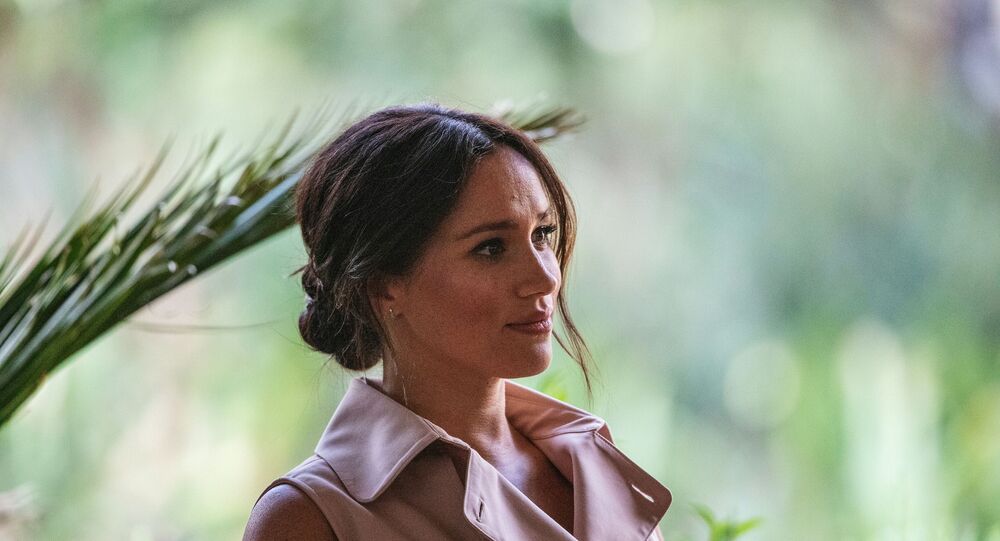 According to the Daily Mail, Meghan Markle burst into tears upon learning that her sister was writing a book about her and felt she was "being taken advantage of".

"The Diary of Princess Pushy's Sister Part 1", an explosive book penned by the half-sister of the Duchess of Sussex, Samantha Markle, is set to hit shelves in the US later this month.

While it's unclear if the Markle bombshell chronicle will see the light of day in the UK due to strict libel laws, it promises to tell the "hidden truths about her family, as a royal fairy plummets from the tea towels".

According to the book, which is over 300 pages long, "things are not always as they seem" and "truth is stranger than fiction".

© REUTERS / SIMON DAWSON
Piers Morgan Brands Meghan Markle and Prince Harry 'Vapid Little Wastrels' in New Twitter Blast
Samantha, the eldest daughter of Thomas Markle, announced the book about her relationship with Meghan a long time ago. Over the years she has repeatedly slammed the Duchess as a "hypocrite", once branding her "a shallow social climber" with "a soft spot for ­gingers".

In February 2019, the Daily Mail reported that Meghan burst into tears after finding out that her half-sister was planning to write a book about her. The then-pregnant Duchess was allegedly frustrated, feeling that she was being "taken advantage of", as claimed by "a close friend with knowledge of the situation".

At the time, the same "friend", who remained anonymous, revealed to the British publication that Meghan had stopped reading interviews with members of her family upon learning the news about Samantha's literary ambitions.

"Out of everything that's been said, the one thing that really upset her was that [the book]. She and Samantha never had a very good relationship and she feels her sister is using her position for profit", the source was cited as saying by the Daily Mail.

Samantha Markle revealed her intentions to pen a book in April 2016, saying the endeavour would be titled "The Diary of Princess Pushy's Sister". In January 2019, she announced she would be writing a second book called "In the Shadows of the Duchess".

In the wake of Meghan's engagement to Prince Harry, Samantha made multiple TV appearances, later accusing her half-sister of abandoning their father when they had a big (and later on public) falling out in the lead up to the royal wedding. Meghan, for her part, has on numerous occasions criticised Samantha's allegations as "absurd", stressing that they barely know each other. At the time of the royal wedding, Samantha Markle had been estranged from her half-sister for almost a decade and was not invited to attend the star-studded event.

© AP Photo / Ben Stansall
'Almost Unsurvivable': Meghan Markle Says She Was the World's 'Most Trolled Person' in 2019
Thomas and Meghan Markle have remained on strained terms since a scandal around the publication of a private letter to her father in The Mail on Sunday, which added fuel to speculations that their relationship had broken down even before the "Suits" star's wedding to the royal.

Meghan has since sued The Mail on Sunday for publishing extracts of the handwritten letter she wrote to her father in August 2018. Thomas Markle is said to have leaked the letter to the newspaper after Meghan's friends told People magazine that she had written it in a bid to mend their relationship.

Meghan Markle and her husband, Prince Harry moved to North America after announcing in January 2020 that they would be stepping down from their senior royal positions to start living a "financially independent" life.