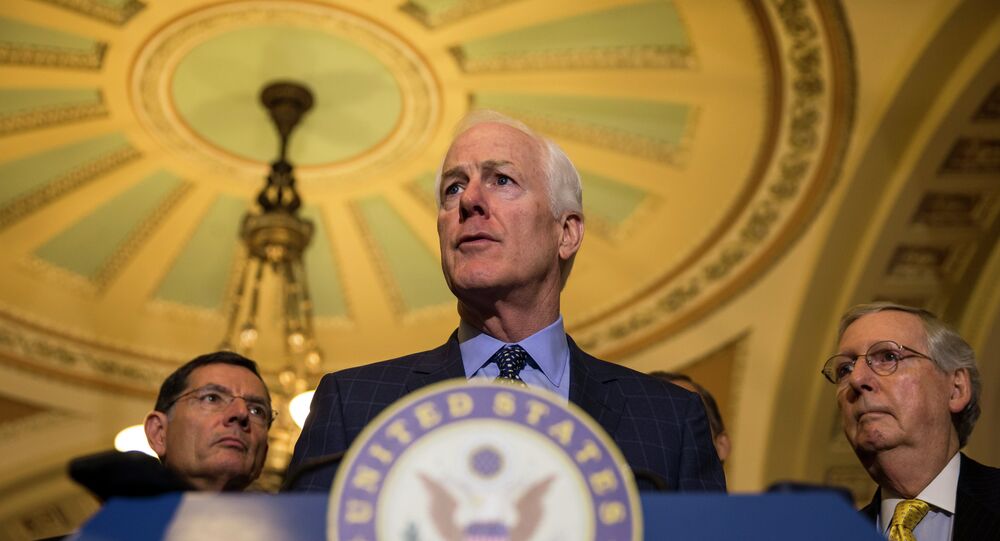 ‘Isn’t It a Felony?’ Texas Senator Lambasted Over His ‘Dogsh**’ Christmas Brisket

The innocent sharing online of a cherished family tradition has severely backfired on Senator John Cornyn. Things would perhaps have turned out differently had it not been for the limbo that the COVID-19 stimulus package is in.

Republican Senator John Cornyn’s tweet on his “brisket family tradition” immediately landed in netizens’ crosshairs, with the public divided over what exactly to take aim at.

As Cornyn, the senior United States senator for Texas, attached an image to his tweet, supposedly of the brisket his family enjoyed for their Christmas meal this year, few (if any) seemed to find their mouths watering:

I literally just salted and peppered this brisket in preparation for roasting tomorrow and it already looks more appetizing than whatever this godforsaken disaster is. pic.twitter.com/GiakLoDz4u

“You accidentally dropped tomato paste on it”, someone posted, while others went on to share pictures of their own Texas cuisine specialties, namely of visibly succulent braised meat, as compared to Cornyn's "dogsh**" meal:

… some even suggested, tongue-in-cheek, that to “do this to brisket” equals a crime:

I'm a butcher's daughter from Boston and if I ever did that to a brisket my late father would come back from the grave and stomp a mud hole in my ass.

While acknowledging that brisket is arguably not the most expensive meat on market shelves, some meanwhile rushed to dwell on the cost of the senator’s appliances seen in the background:

@JohnCornyn, Republican senator, wants to show us his heaping meat tray along with his to-the-trade-only appliance while 300,000+ are dead and millions are homeless and/or jobless. People in America are going hungry this Christmas.

He actually has the 4 burner version, which still runs $5400....or the equivalent of 9 stimulus checks. pic.twitter.com/MnD3pWbHzo

Many more found it more relevant to accuse the lawmaker of tone-deafness, given the fact that millions of Americans are still waiting for their stimulus checks.

Bickering in Congress delayed the passing of the COVID relief package, which Trump is still refusing to sign, pushing for a $1,400 increase over what Republican and Democratic leaders had negotiated: "I simply want to get our great people $2000, rather than the measly $600 that is now in the bill", Trump tweeted Saturday morning. "Also, stop the billions of dollars in ‘pork’".

Many in Cornyn’s Twitter thread pointed to the stark contrast between someone’s family meals and others struggling to make their ends meet on Christmas.

“I love it when people are starving & about to be evicted these f***ing Republicans post their family feast”, one wrote, with another coming up with his own verdict:

Many others posted similar messages, lamenting the significant wealth inequality in Texas and beyond:

While John Cornyn sits down and enjoys that expensive monstrosity he thinks is a brisket, millions of Americans are sitting down to dinners like this tonight thanks to John & the GOPs incompetence to protect their citizens. We need that $2000 right now! Get up and help! pic.twitter.com/jRObWt3y1N

Texas capitol, Austin, has many many homeless people living in tents in the downtown area. Town Lake looks like a very crowded camp site. What is the plan to help them get food jobs and a home?