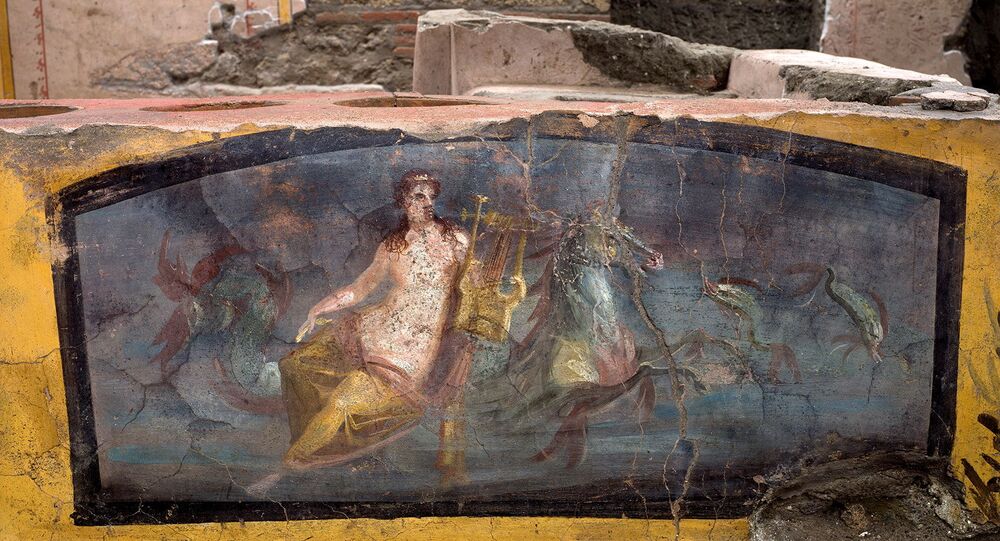 The ancient Roman city of Pompeii tragically destroyed in a volcano eruption in 79 AD is currently undergoing the most active excavations in decades, presenting more and more discoveries to the public. As the city has seen only about two-thirds of its territory excavated, it seems its history hasn't been completely written.

A team of archaeologists has unveiled a perfectly preserved thermopolium, an Ancient Roman analogue of modern-day street food joints, in Pompeii, still decorated with colorful rich frescoes and graffiti, the Archaeological Park of Pompeii stated on Saturday.

A thermopolium was a place where hot food and wine were served to the city's dwellers, and the archaeologists hope this discovery will shed light on their gastronomic habits.

Most interesting is that the counter of the eatery, dubbed a "snack bar" by the archaeologists, is decorated with an image of a Nereid riding a sea-horse, still intact, with drawings of two ducks shown upside down, ready to be cooked, along with a rooster and a dog on a leash. The frame of the dog painting seemingly contains a mocking inscription, and the scientists reportedly believe that it was likely addressed to an owner or an employee of the establishment.

"As well as being another insight into daily life at Pompeii, the possibilities for study of this Thermopolium are exceptional, because for the first time an area of this type has been excavated in its entirety, and it has been possible to carry out all the analyses that today’s technology permits,” Massimo Osanna, Interim Director General of the Archaeological Park of Pompeii, said in a statement.

1 / 3
© REUTERS / Luigi Spina
Frescoes on an ancient counter discovered during excavations in Pompeii, Italy, are seen in this handout picture released December 26, 2020.

They also found human bones near the thermopolium, some of which belong to a man of about 50 years of age.

© REUTERS / Luigi Spina
Photo: Remains of 'Master' and His 'Slave' Discovered in Ashes of Ruined Roman City of Pompeii
The scientists also found traces of food still in some of the terracotta jars found inside the shop, including crushed beans that were reportedly used to modify the taste of wine served.

The excavations have been conducted since 2019 under the framework of the Great Pompeii Project, aimed at the preservation of the city's cultural heritage.

The city and a large number of its citizens were buried under the ash from the Vesuvius volcano eruption until it was discovered in the 16th century, while the real archaeological excavations started in the mid-18th century.