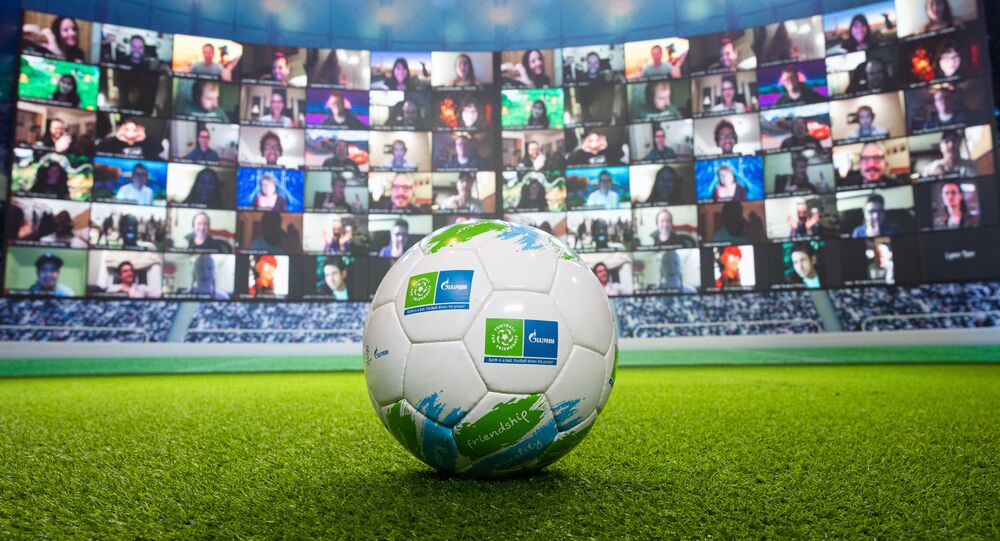 The annual Football for Friendship Championship has been bringing together young players and young journalists from all over the world since 2013 so they can learn the tricks of their favourite crafts from global masters, as well as to communicate and learn about key human values. Even the pandemic was unable to thwart this global event.

The Eighth Season of the Gazprom International Children’s Social Programme Football for Friendship (F4F) has successfully concluded, amassing over one million participants from 104 countries of different genders, nationalities, and physical abilities. The programme even broke a new Guinness World Record by gathering the most participants on a football/soccer video hangout.

This season, the event had to significantly change its format and carry out the first-ever Football for Friendship eWorld Championship for young athletes. Some of the events were conducted in an online format, with organisers developing a dedicated multiplayer football simulator called Football for Friendship World so the championship could be held despite the coronavirus pandemic.

Opportunity to Grow During the Pandemic

F4F Global Ambassador, as well as World Cup and UEFA Champions League winner, Roberto Carlos praises the event for giving youth from all over the world a chance to grow and learn the Nine Values promoted by the F4F team - friendship, equality, fairness, health, peace, devotion, victory, tradition, and honour.

"Football for Friendship is a programme that brings together truly talented and motivated kids who are in love with football, giving them the opportunity to develop, learn more about each other and find new friends in other countries. Many young football players all over the world dream of getting into Football for Friendship, and the universal human values promoted by the programme are really important for the children, for their future", Carlos states.

Carlos' excitement about this year's F4F championship is shared by the main participants - children aged between 10 and 16. They partook in one of two capacities: either as athletes or, as was the case with Anna Shishkova from Bulgaria, as young journalists covering the events of the championship. Shishkova praises the F4F programme as a great way to promote an easy way to care for one's body and mental state. She also stresses the importance of the values promoted by the F4F events as crucial for modern society.

"Devotion is a key for very strong connections between people and opens many doors and opportunities. Victory is important because it can challenge us to reach our goals. […] I think we should promote honour, because [this is] something that we very much lack in today's society", Shishkova says.

The F4F championship has drastically affected some of the participants' lives, not only by allowing them to make friends from all over the world, but also by helping them develop skills they weren't aware that they had in the first place. One of the participants of the F4F championship in 2017, Ananya Kamboj from India, wrote a whole book, "My Journey from Mohali to St. Petersburg" following her experience taking part in the annual event.

"Before my journey, I couldn't imagine that I would be part of such a beautiful programme. 'Will I be able to make so many new good friends?' 'Will I be able to showcase my skills and learn new things?' Of course, I was able to", Kamboj said, speaking at the International Football for Friendship Forum in Madrid.

Kamboj says she could not imagine how transformative her experience at the F4F would be. She praises the programme as a "bridge between adults and children", referring to the F4F's organisers attracting football experts from all over the world to teach the participants football strategy and tactics, as well as new moves.

The F4F provided opportunities not only for football fans, but also for those aspiring to pursue a career in journalism. Those who chose this path had a shot at becoming hosts and correspondents covering the events, or talking about ecological and social initiatives, or could even take part in global discussions hot on the heels of the 75th anniversary of the United Nations. Along the way, young journalists received support and advice from representatives of football academies and journalists at the world’s leading media outlets.

© Photo : Press Service of the International Children’s Social Programme Football for Friendship implemented by Gazprom
Apart in Distance, But Not in Heart: Gazprom’s New Season of Football For Friendship Will Unite 10,000 Children Across the World

Many of these things had to be held in an online format, forcing coaches and famous athletes to adapt their teaching skills to be used in the format of video conferences with the participants. And while they successfully managed to pull it off, one F4F curator, Frank Ludolph, UEFA's head of Football Education Services, expressed his hope that this year's pandemic would be nothing more than a "bad memory" and that the F4F will be able to return to its regular offline format.

Gazprom’s New Season of 'Football For Friendship' Will Unite 10,000 Children Across the World