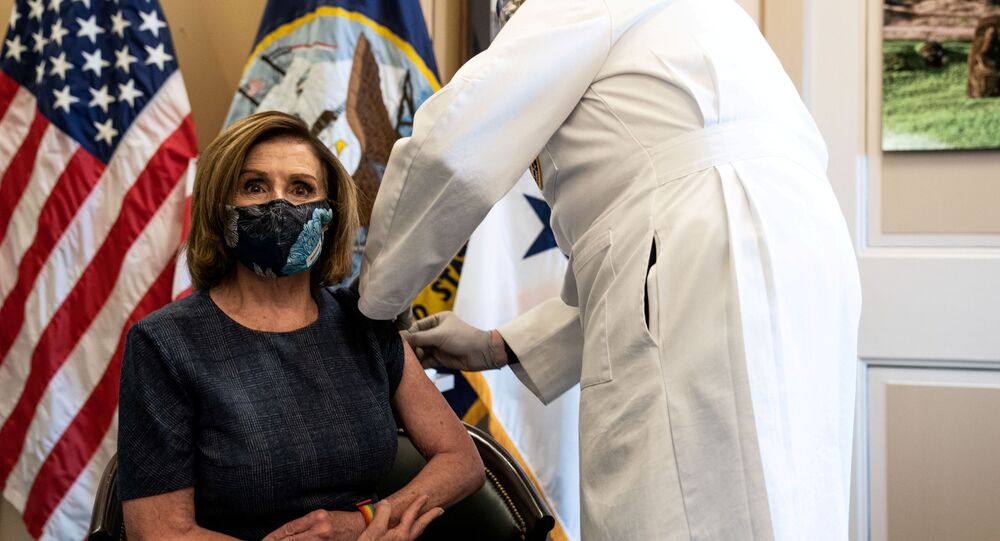 The US Food and Drug Administration (FDA) on December 11 issued the first emergency use authorization for a COVID-19 vaccine to a drug produced by Pfizer and BioNTech. US health care workers began receiving the vaccine this week.

In addition to US health workers, senior US government officials have begun receiving Pfizer’s COVID-19 vaccine, with Speaker of the US House of Representatives Nancy Pelosi (D-CA) and Senate Majority Leader Mitch McConnell (R-KY) receiving their first doses of the vaccine on Friday.

According to a report by The Hill, Pelosi received the vaccine at noon on Friday. The shot was personally administered by the Capitol’s attending physician, Brian Monahan.

"Today, with confidence in science & at the direction of the Office of the Attending Physician, I received the COVID-19 vaccine. As the vaccine is being distributed, we must all continue mask-wearing, social distancing & other science-based steps to save lives & crush the virus," Pelosi tweeted Friday, along with photos of Monahan giving her the shot.

"Just received the safe, effective COVID vaccine following continuity-of-government protocols. Vaccines are how we beat this virus," tweeted McConnell, a survivor of childhood polio. "Now back to continue fighting for a rescue package including a lot more money for distribution so more Americans can receive it as fast as possible."

​Other senior US government officials have also started to receive the vaccine, including Vice President Mike Pence, his wife Karen and Surgeon General Jerome Adams, who all received the shot on live television Friday morning. President-elect Joe Biden is expected to be vaccinated on Monday, The Hill reported.

According to data from GovTrack, at least 102 members of Congress have either quarantined, tested positive for COVID-19 or been exposed to someone who has the illness. In addition to being considered essential workers, federal lawmakers face a high risk of virus exposure due to frequent travel and interactions with others.

Congressional leaders are currently in the process of negotiating a new COVID-19 aid package that is anticipated to be worth around $900 billion. It is expected to include a $300 federal unemployment bonus, another round of direct payments to Americans, small business funding and money for COVID-19 vaccine distribution, NBC News reported.

However, the negotiations stalled Friday after Democrats protested efforts by Republicans led by Sen. Pat Toomey (R-PA) to include a provision to the bill that Democrats believe will make it more difficult for the incoming Biden administration to access emergency powers for additional lending authority.

On Thursday, an FDA advisory panel recommended granting Moderna’s COVID-19 vaccine an emergency use authorization. If approved by the FDA, the vaccine could be distributed in the US as early as next week.

No Special Anti-COVID-19 Vaccine Will Be Developed for President Putin, Kremlin Says

US Vice President, Second Lady Get COVID-19 Vaccination in Public