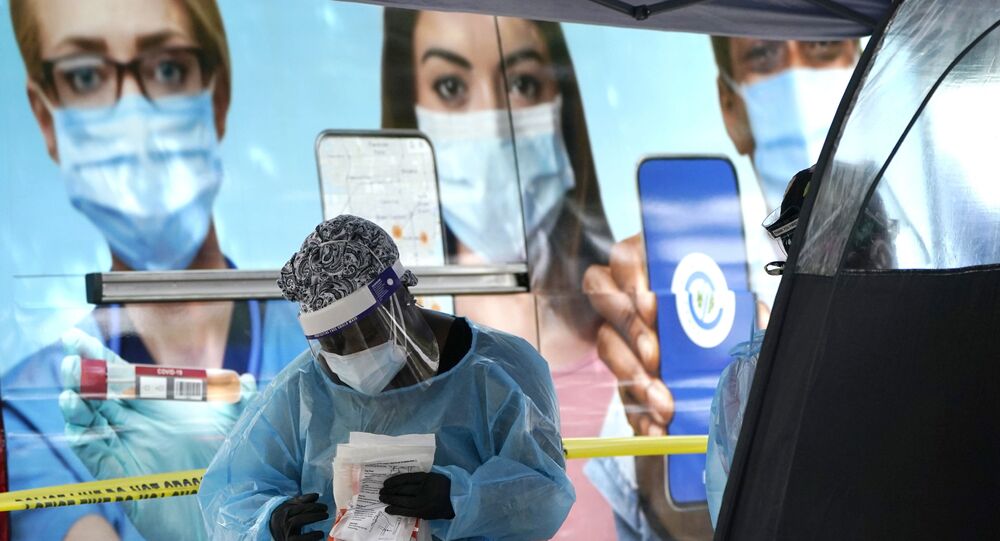 The latest tally by the Johns Hopkins University indicates that the US has maintained a COVID-19 positivity ratio of over 11% as some 193,454 new cases were reported on Monday. The US states seeing the highest case counts, in order, are California, Arizona, Texas, Tennessee and Pennsylvania.

A new Axios-Ipsos Coronavirus Index survey released Tuesday has found that 1 in 4 surveyed Americans intend to sign themselves up to get a COVID-19 vaccine as soon as it’s available to the public.

The US presently has one approved COVID-19 vaccine that began its initial rollout on Monday. Pharmaceutical company Pfizer has shipped nearly 3 million doses of the two-part vaccine across the US, with the intention of the drug being first given to medical professionals and nursing home residents and staffers.

The survey, which polled a sample of 1,009 adults, determined that rising interest in being vaccinated was “particularly pronounced among older Americans, especially those over age 65.”

The US Centers for Disease Control and Prevention (CDC) has indicated that older Americans are at a much greater risk of dying or requiring hospitalization after contracting the respiratory disease. The agency found that 80% of COVID-19 deaths in the US involved individuals aged 65 or older.

“Overall, Americans are evenly split on whether they plan to get it soon or later on: 38% say as soon as it’s available or a few weeks after, while 40% plan for a few months after, or a year or more after,” reads the survey.

However, 21% of the respondents indicated that they had zero interest in having the vaccine administered, a figure that remains unchanged from a September poll's results. Officials noted that Black Americans, individuals who obtained a high school diploma or less and those who were aligned with the Republican Party were the least likely to be convinced on getting the vaccine.

And yet, it’s not surprising that many in black communities are hesitant about being first in line for a new vaccine, since, as history proves, Black Americans have been largely sidestepped and mistreated by the medical system. Many skeptical of the COVID-19 vaccine rollout point to the 40-year Tuskegee Syphilis Study that saw medical professionals forgo treating black participants even after penicillin became widely available by 1947, a whopping 15 years after the study was initiated.

Brittani James, a doctor who serves the predominantly black communities of Chicago’s South Side, told NBC News that Black Americans' hesitancy toward the vaccine is not a result of paranoia or being uninformed on the subject matter.

“The reality is that their worries have been earned and will not be corrected until medicine and public health and the government reckon with the past and what has been done to Black and brown people,” she said.

The survey found that when it came to political affiliations, the majority of individuals who identified as Democrats believed that the pandemic death toll was higher than reported by health officials, whereas Republicans believed the count was inflated and that the toll was less than what is being documented.

With the holiday season in full swing, 35% of the participants acknowledged that they felt they were at greater risk of contracting COVID-19 now than when the pandemic reached its initial heights in April.

Anthony Fauci, the director of the US National Institute of Allergy and Infectious Diseases who also serves as a member of the White House coronavirus task force, recently warned that the holiday gatherings around Christmas and into the new year were likely to cause COVID-19 case numbers to surge since more indoor meet-ups were likely to unfold.

The latest Axios-Ipsos poll was conducted between December 11 and 14. The margin of error was 3.3 percentage points.