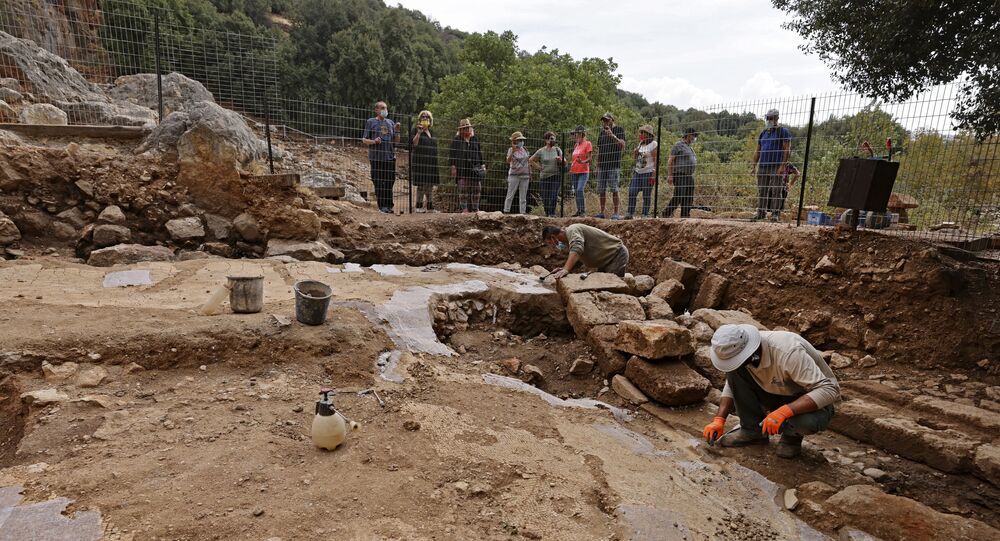 The altar was found during the excavation of an ancient church in the Banias Nature Reserve in northern Israel, with the dedication on it mentioning two deities – Pan and Zeus.

A team of researchers in Israel has uncovered an ancient – around 1800-year-old – altar honouring the Greek god Pan, the patron deity of shepherds, Haaretz reported.

The inscriber reportedly scrambled to etch letters outside the altar’s frame and make them fit by significantly shrinking letters toward the end of the lines, so the craftsmen behind the inscription on the art object must have truly lacked skills, the archaeologists suggested.

"The inscriber was no pro", Avner Ecker, project co-director and archaeologist at Bar-Ilan University in Ramat Gan, Israel, told the Israeli edition.

The Greek dedication to the deity reads:

"Atheneon son of Sosipatros of Antioch is dedicating the altar to the god Pan Heliopolitanus. He built the altar using his own personal money in fulfilment of a vow he made".

The researchers certainly took note of the wording, as the altar inscription doesn’t simply say “Pan”, but “Heliopolitanus Pan", bringing together the gods Pan and Zeus, who was widely worshipped in Antioch, in the area around today’s Turkey-Syria border.

The artefact, which dates back to the second or third century AD, was found lying sideways on the ground as the team was excavating a rare Byzantine church in northern Israel’s Banias Nature Reserve, an ancient site that developed around a spring once associated with the Greek god Pan.

© CC BY 2.0 / Hans Johnson / Nazareth
Archaeologist Claims to Have Found The Home Where Jesus Christ Spent His Early Days in Nazareth

The location of the Banias excavation is geographically unique in that it combines a cliff, a cave, springs, and a terrace constructed from the collapse of part of the cliff on which the temple was erected.

1,800-year-old altar to pagan god Pan hidden in a #Byzantine #church#Archaeologists in #Israel have #discovered an ancient altar honoring the #Greek god Pan, the deity of flocks and shepherds, but whoever inscribed it botched the job.#History pic.twitter.com/L44pitcrBU

Widespread worship of the god Pan began in about the third century BC near the cave and the spring. The temple was built circa 20 BC, while the region became an important Christian centre with its own bishop starting from around 320 AD, according to a Times of Israel report.

Whoever built the church apparently didn't want worshippers to see the dedication to the god Pan, so the altar was turned around, perhaps to humiliate pagans who still had "old" polytheistic beliefs, Adi Erlich, project co-director and archaeologist at the Zinman Institute of Archaeology at Haifa University, said in a statement.