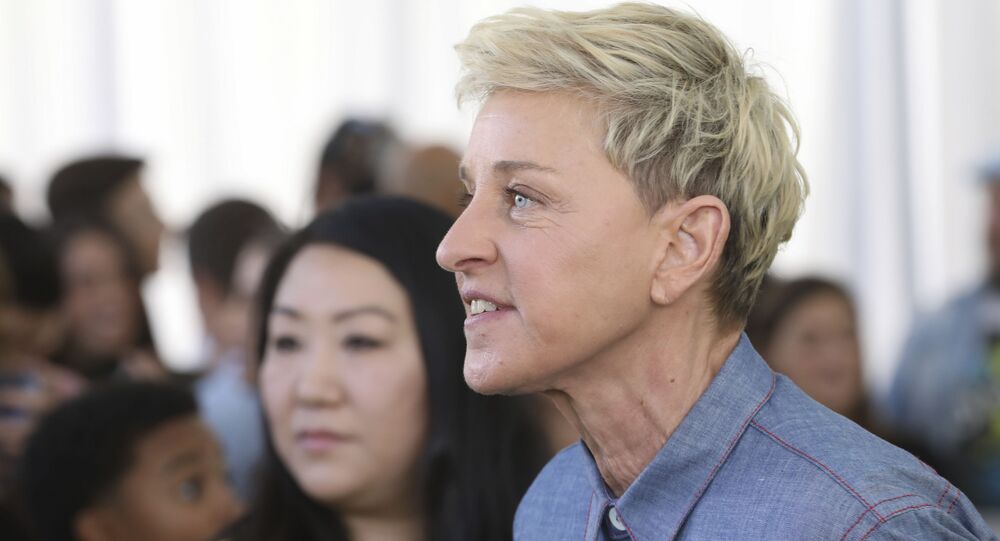 In late September, US TV host Ellen DeGeneres launched a new season with an apology to staff who quit or were sacked for the "toxic work environment" at the hugely popular alk show, assuring the public she really takes the matter "very seriously".

Although it has been over two months since US actress and comedian Ellen DeGeneres got back to her namesake talk show, which she currently hosts from her home due to coronavirus restrictions, it appears the programme still hasn't fully recovered from a recent harassment (including sexual) and racism scandal.

According to staffers and other sources cited by BuzzFeed News, the show, which has been on since 2003, has been dealt a huge blow, as it has purportedly lost its advertisers and now finds it exceptionally hard to book A-listers as guests, leading to an abrupt fall in ratings.

Two quoted employees say the production of digital content is crippled, complaining that an apparent lack of advertising funds has led them to re-air some old pieces.

"We're trying to be a content house, but we have no content", one employee said, with the loss of sponsors being attributed to the raging pandemic and a lengthy stint of bad publicity.

The sources say the show's team is struggling to book talent, which never happened before:

"For the first time, everyone was starting to ask us, 'If you have an idea, tell us because we will listen. If you have an idea for a celeb, even if they're not A-list or famous, we'll take anyone who will bring us numbers and eyeballs'", a staffer said. "That's when they started to be real with us and essentially said, 'Give us anything because we need help'. Our old strategy doesn't work anymore".

Entertainment publicists are meanwhile purportedly wary of booking their clients for the current – 18th – season of the talk show, which kicked off on 21 September, because they would prefer them not to be part of "her [Ellen's] comeback tour" despite the allegations having little to do with DeGeneres herself.

Yet another source close to the show's management says they haven't faced any trouble booking quality content.

"The show is fully booked and a lot of those guests are exclusive to Ellen, and that's even more remarkable because as you know, there are no movies opening, there are no concerts being had, there are no TV events or premieres", the source said.

"So the whole talk show circuit that these major celebrities do is not happening".

Claims about a reportedly toxic workplace culture at "The Ellen DeGeneres Show" have led to an internal investigation by WarnerMedia, Variety reported in summer.

Sources who spoke to the outlet say the show's production company (Telepictures) and distributor (Warner Bros. Television) "sent a memo to staffers…saying they have engaged WBTV-owner WarnerMedia's employee-relations group and a third-party firm, who will interview current and former staffers about their experiences on set", the Variety report went on.

In mid-July, BuzzFeed News published accounts from current and former Ellen employees who claimed on the condition of anonymity that they were mistreated during their tenure at the show, which was allegedly solely striving to produce make-believe impressions.

"That 'be kind' bullsh*t only happens when the cameras are on. It's all for show", a former employee told BuzzFeed referring to DeGeneres' "Be Kind Lady" moniker.

"I know they give money to people and help them out, but it's for show".

A black woman said she was the target of microaggression and racist comments, including remarks about her box braids. She also said one of Ellen's senior writers confused her with another black staffer at a corporate party telling her:

"I'm sorry, I only know the names of the white people who work here", she recalled, while other allegations also covered unfair sackings at the show.

None of the allegations were actually directed at DeGeneres herself. "If she wants to have her own show and have her name on the show title, she needs to be more involved to see what's going on", one of the employees said in the BuzzFeed report, alleging that Ellen perhaps knows what's going on only from her executives' one-sided stories, "but it's her responsibility to go beyond that", the staffer concluded.

As per People magazine, a day after the internal investigation hit the headlines, the talk show host sent an apologetic memo to her staff. She asserted she was glad the issues had been brought to light and that she hopes to "learn and grow".

"I am so proud of the work we do and the fun and joy we all help put out in the world. I want everyone at home to love our show and I want everyone who makes it to love working on it. Again, I'm so sorry to anyone who didn't have that experience. If not for COVID, I'd have done this in person, and I can't wait to be back on our stage and see you all then. Stay safe and healthy. Love, Ellen", she rounded off her address.

Yet, in the wake of the controversy, three senior staff exited the team.

DeGeneres issued another apology as she released a five-minute clip the day she launched a new season of her show. She made use of the first episode of the 18th series of Ellen, recorded in front of a bizarre virtual audience on video screens, to address the scandal that rocked the TV world in July.

"I learned that things happened here that never should have happened", she stressed, assuring her viewers that she "takes it very seriously and wants to say she is sorry to the people who were affected".