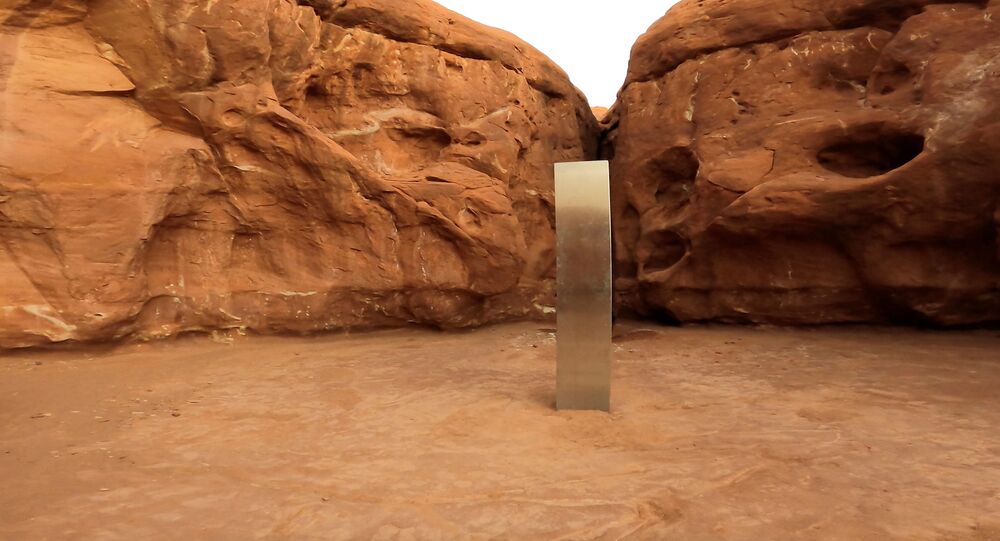 Not a day seemingly goes by without a mysterious metal-like structure suddenly appearing somewhere in the world. So far, the structures have been spotted in Colombia, England, the Netherlands, the United States, Romania, Russia, and Spain.

While in recent days the concerned public has received answers to the question "where some of the mysterious monoliths have disappeared", questions over their origin remain answered. What are the structures and who put them there? Here are some of the most popular theories:

Starting the list is the most plausible hypothesis - the metal-like slabs are actually designed by an artist. The New York Times wrote that one pillar likely belonged to late artist John McCracken. Famous for his minimalist creations, one of his works, dubbed "Fair", is almost identical to the first monolith that appeared in Utah. The artist's son recently revealed that his father wanted to leave his works in different locations to be discovered later.

The art collective The Most Famous Artist was named as the other likely candidate behind the enigmatic structures. The group, headed by artist Matty Mo, gave a vague explanation. Although it has not taken responsibility for the shiny monoliths, it predicted that more structures will appear across the world and said they had sold one monolith for $45,000 to an unknown buyer.

Despite its apparent simplicity, this hypothesis is one of the most popular theories explaining how three-metre pillars have unexpectedly appeared and vanished without a trace across the world – someone is just goofing around in a bid to distract the public from the doom and gloom brought by the coronavirus pandemic. Not a bad idea!

According to this theory, the original monolith that appeared in mid-November in Utah was a decoration used in the filming of the famous sci-fi series Westworld. The film crew is said to have been working in a nearby location.

The film crew has not yet commented on this view.

One in Utah is Not New, While Others Are Copycats

This hypothesis fails to answer the question of whose idea it was to put the structure in public, but at least it may shed more light on the mystery. According to The Insider, which studied data from the Google Earth 3D computer program, the monolith that was discovered in November in a canyon in Utah in the United States had been there for a long time. The website claimed that it appeared years ago, somewhere between August 2015 and October 2016. However, the state employees who discovered the bizarre structure insist it wasn’t there when they inspected the area in past years.

The uncanny resemblance to the metal slab in Stanley Kubrick’s 2001: A Space Odyssey and the fact that the structures appear as unexpectedly as they vanish have of course prompted speculation that the pillars are the work of aliens. In Kubrick’s movie, co-written by science-fiction author Sir Arthur Clarke, the alien monolith enabled the apes to evolve and learn how to use bones as a hunting tool.

Supporters of the alien origin theory claim that the structures were installed by extraterrestrials in order to contact humans. Judging by the growing number of monoliths, extraterrestrial civilisations seem to be very lonely...