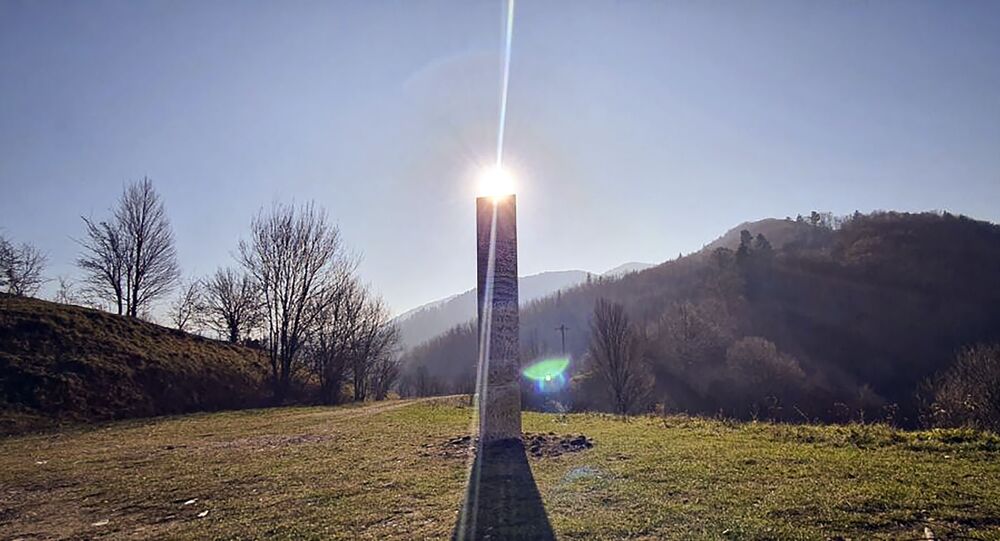 2020 would have been incomplete if it had not presented us with a mystery of metal-like structures unexpectedly appearing in different places around the world and then vanishing without a trace. What are they and, more importantly, who built them? An expert has told Sputnik what he thinks about the bizarre structures.

First Utah, then Romania, and now California – enigmatic monoliths keep popping up across the world, gaining more and more attention. Just like its predecessors, the triangular structure that appeared early on Wednesday on Pine Mountain near the small town of Atascadero unexpectedly disappeared. The news prompted more speculation that the metal-like structure had been installed by aliens.

However, Joshua P. Warren, a renowned expert on paranormal research, denied those allegations, saying the monoliths have nothing to do with extraterrestrial civilisations.

"Considering the stress and chaos of this year, everyone is hoping aliens will finally beam down and straighten things out! If that would, indeed, be a good thing, I have some bad news. My inside sources say all these monoliths are the work of human artists", Warren told Sputnik.

When the first three-metre tall monolith appeared in a canyon in Utah, netizens immediately compared it to the metal slab in Stanley Kubrick's 2001: A Space Odyssey. In the movie, co-written by Sir Arthur Clarke, an English science-fiction author, apes discover an alien monolith in a veldt, and it impacts their evolution - they learn how to use a bone as a hunting tool.

Just like the apes gathered around the mysterious structure in Kubrick’s movie, people have been flocking to see the monoliths in Utah, Romania, and California. Joshua P. Warren believes that the structures have a spiritual meaning allowing people to see what they desire.

"The monolith is literally a blank slate, upon which one can project whatever he or she desires. Compared to reality right now, that projection is generally a more pleasant image. The monoliths are literally mirrors that reflect the observer's true identity, situation, and wishes", Warren said.

The expert believes more copycats or homages will appear in other parts of the world. And it turns out he is right. During the writing of this article, a metal-like structure mysteriously appeared in Russia’s Tula region.