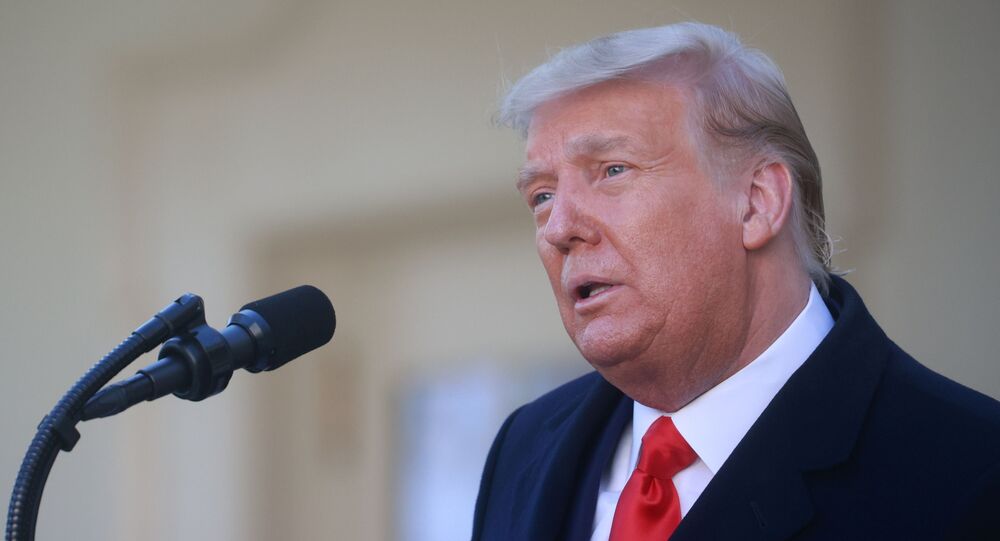 Prank or no prank, a new poll has revealed that US President Donald Trump would win the Republican presidential nomination in 2024 if he decided to run again. POTUS is currently declining to concede defeat to the projected winner of the 3 November election, Democrat Joe Biden, claiming incidents of "fraudulent" voting.

President Donald Trump has been pranked by two New York City-based comedians who snapped up a website mocking POTUS' alleged bid to retake the White House in 2024.

"We got the domain DonaldJTrump2024.com", prankster duo, Jason Selvig and Davram Stiefler, also known as "The Good Liars", announced on their Twitter page on Wednesday.

They also attached a video to the post, in which the two are seen entering a fake website page that shows Trump getting off Air Force One and saluting a marine with the caption, "I lost the 2020 election".

The "website" also has unclickable buttons like "Loser" and a banner reading, "Click here to donate to a PAC [political action committee] that has nothing to do with my legal defence team", an apparent reference to attempts by the president's legal team to file an array of lawsuits against what Trump describes as "voter fraud" in the 3 November election.

Hey @realDonaldTrump we'll give you https://t.co/7NxQkh5wBO if you tweet "My name is Donald Trump and I lost the 2020 election by A LOT. I am a loser. SAD!"

In a separate post, the comics pledged to give the US president the domain if he tweets "My name is Donald Trump and I lost the 2020 election by lot".

Most netizens appreciated the prank, tweeting lol comments in which they noted that the comedians "never cease to amaze and delight" and that "troll level ninja" has been "unlocked".

They really are incredibly bad at everything. Well played!

Meanwhile, a survey conducted by the US news outlet Politico and the company Morning Consult, revealed that at least 53% of GOP respondents said they want Trump to run for re-election in the 2024 presidential race. With projected winner of the 2020 election Joe Biden already announcing his Cabinet picks, POTUS refuses to concede and continues to claim that he "won" the 3 November election.