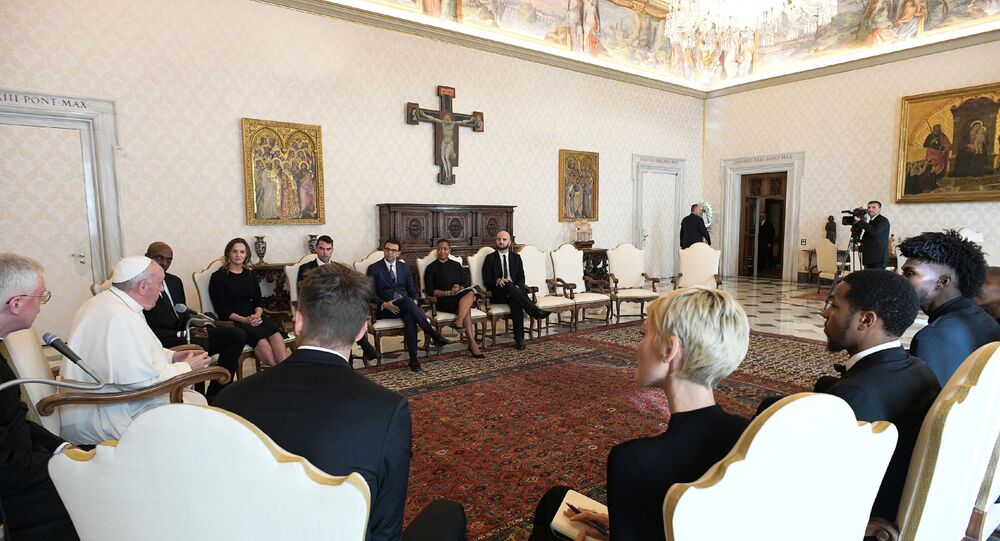 In recent months, there have been several instances of police brutality against Black Americans, including the killing of 46-year-old George Floyd in Minneapolis, Minnesota, and the shooting of 29-year-old Jacob Blake in Kenosha, Wisconsin.

A delegation of five National Basketball Association (NBA) players and officials met on Monday with Pope Francis at the Vatican to discuss ways to address social justice and economic inequality following the deaths and injuries of several Black Americans at the hands of police.

​The visit, which took place in the Apostolic Palace, was arranged after the Vatican extended an invitation to the players’ union, the National Basketball Players Association (NBPA); the pope recently expressed interest in learning more about the players’ social justice activities, the union said. Executive Director of the NBPA Michele Roberts and players Kyle Korver, Sterling Brown, Anthony Tolliver, Marco Belinelli and Jonathan Isaac joined the meeting.

During the meeting, the players discussed social efforts they are involved in related to the Black Lives Matter Movement and also offered the pope a book that outlines many of their community and social initiatives as well as an Orlando Magic jersey and a Black Lives Matter T-shirt.

“We are extremely honored to have had this opportunity to come to the Vatican and share our experiences with Pope Francis,” Korver said, according to a news release from the NBPA. “His openness and eagerness to discuss these issues was inspiring and a reminder that our work has had a global impact and must continue moving forward.”

Both Brown and Korver were players who refused to take part in scheduled basketball games for the Milwaukee Bucks in August after the shooting of Blake, as a protest of police brutality. The wave of protests also spread to other leagues, including Major League Baseball, Major League Soccer and the Women's National Basketball Association.

During the meeting, Francis referred to the players as “champions,” AP reported.

Since Pope Francis was elected in 2013, he has attempted to address issues of social justice, including poverty, migration and inequality.

In his October encyclical titled “Brothers All,” the pope wrote that “a readiness to discard others finds expression in vicious attitudes that we thought long past, such as racism, which retreats underground only to keep reemerging.”

“Instances of racism continue to shame us, for they show that our supposed social progress is not as real or definitive as we think,” he added.