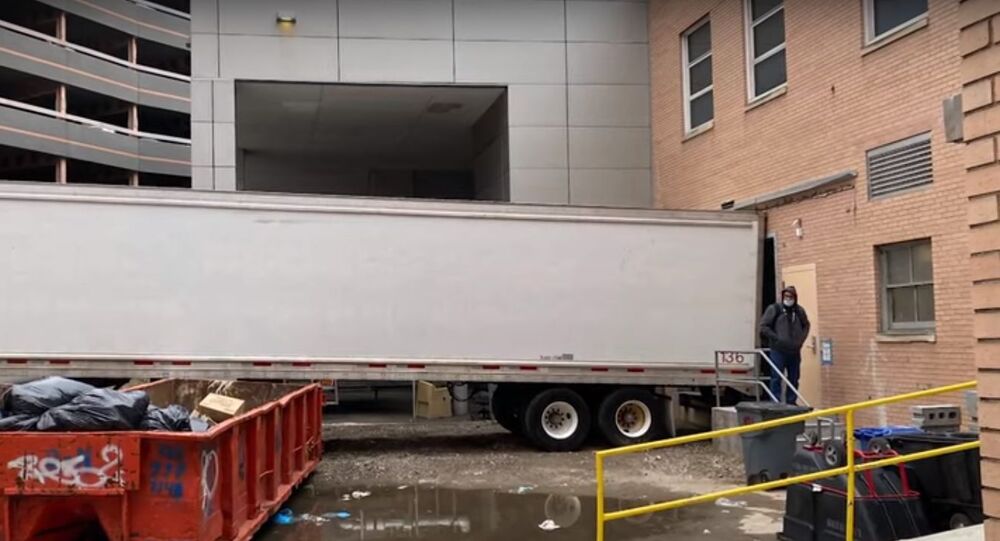 At the start of the COVID-19 pandemic, New York City, New York, became a bustling hotspot for the deadly respiratory disease, as the Big Apple’s death toll numbered in the tens of thousands. Unable to keep up with the spikes, medical officials eventually resorted to the use of refrigerated trucks that were converted into makeshift morgues.

The bodies of hundreds of individuals who died in New York City during the spring COVID-19 surge are expected to remain inside freezer trucks due to outdated contact information for relatives and families being unable to afford the costs of an unexpected funeral.

At the height of the city's surge, during the first three months of the pandemic, approximately 203,000 COVID-19 cases were laboratory-confirmed in the Big Apple, according to the US’ Centers for Disease Control and Prevention. Of the individuals who were hospitalized after contracting SARS-CoV-2, the virus that causes COVID-19, about 32.1% died.

Citing the city’s Office of Chief Medical Examiner, the Wall Street Journal reported Sunday that roughly 650 bodies are still being stored inside the mobile morgues first established in April along Sunset Park in NYC’s Brooklyn borough.

Officials explained to the outlet that the families of about 230 deceased individuals have not been tracked down. One unidentified spokesperson suggested that the situation was not uncommon, as oftentimes next-of-kin information is either incorrect or outdated as individuals become estranged from their families over a period of time.

In other circumstances, the driving factor is a lack of funds for a burial. Although the city is offering families burial assistance of some $1,700, the cost of a traditional, full-service burial can be closer to several thousand dollars.

The New York State Funeral Directors Association places the average cost of a traditional burial at about $9,000, with cremation and funeral services ranging just over $6,000, the Journal reported. However, according to the city’s burial assistance program, a $3,400 burial cost cap has been implemented, leaving families to come up with the $1,700 balance.

Dina Maniotis, the executive deputy commissioner of the chief medical examiner’s office, told the outlet that some families have also been forced to decide whether they want their loved ones buried for free on Hart Island, the final resting place for over 1 million people whose bodies went unclaimed by family or by those who were not able to afford a proper burial.

“This has been traumatic,” Maniotis said. ”We are working with [families] as gently as we can and coaxing them along to make their plans. Many of them will decide they want to go to Hart Island, which is fine.”

Although the city intends to continue the use of the refrigerated trucks until the pandemic is declared over, Maniotis did state that the agency was able to release 48 bodies from storage between September and mid-November.

The latest figures from Johns Hopkins University state that in the Empire State, over 34,000 individuals have died as a result of COVID-19, with more than 24,000 of those deaths reported in New York City.

Elsewhere in the US, counties in Arizona and Texas have also opted to use refrigerated trucks as mobile morgues after having traditional hospital morgues reach capacity.

In recent weeks cases across the US have continued to spike as officials have warned that the holiday season may likely prompt transmissions to skyrocket. Ahead of the Thanksgiving holiday in the US, the Transportation Security Administration reported that over 2 million travelers passed through security checkpoints over the weekend despite repeated calls by health officials to commit to virtual celebrations.