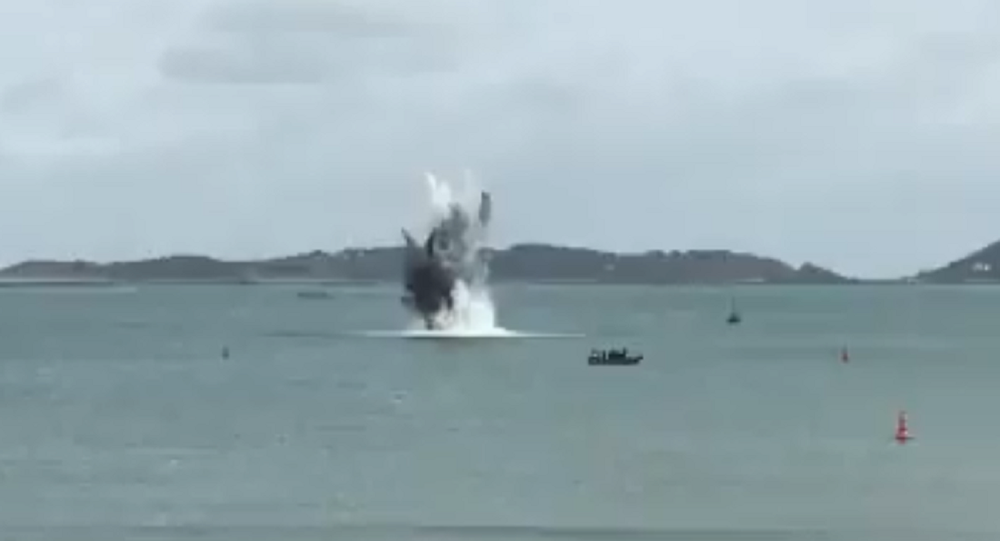 The islands of Guernsey and Jersey were the only British territories to be occupied by German forces during World War II, with around half of the population evacuated during the occupation, which lasted almost five years. There remain German fortifications on the island.

A reported US anti-submarine bomb, discovered 11 November by recreational divers on the seabed near the Queen Elizabeth II harbor on the UK’s Guernsey Island off the coast of Normandy, was detonated by Royal Navy specialists on Monday, local newspaper Guernsey Press reports.

After a 200-meter exclusion zone was established around the location of the charge, Royal Navy scuba divers carried out the detonation. As shown in video, the explosion sent huge amounts of water and smoke into the air as witnesses watched safely from the shore.

As the newspaper quotes the harbor master, Captain David Barke, the bomb was thought to be an American-made anti-submarine depth charge, containing about 100kg (220lb) of explosives.

The bomb, designed to be deployed by planes and destroyers to detonate once it reached a certain sea depth, was undisturbed for 75 years and was likely unearthed due to the constant movement of the seabed and changing tides.