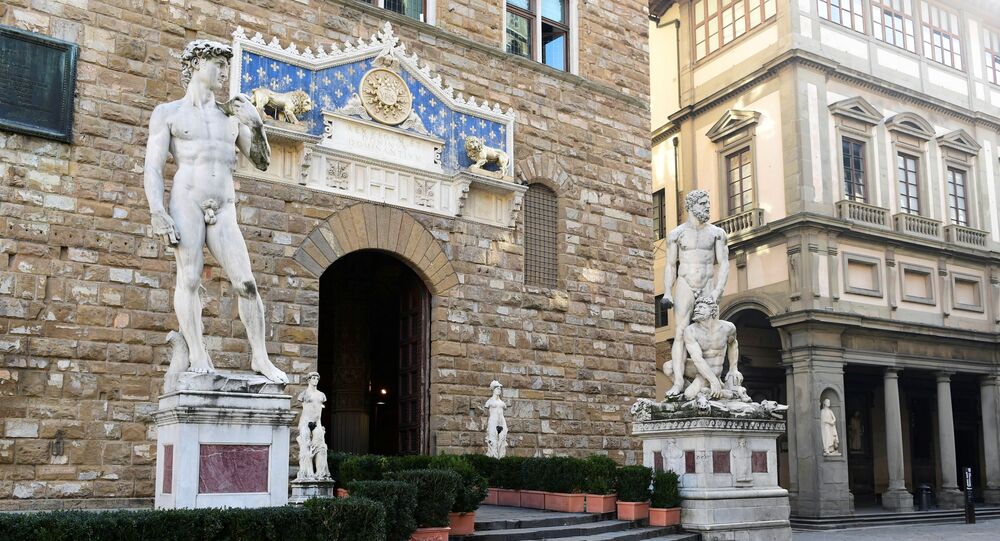 US-based historian Andriano Marinazzo has suggested that the graffiti on the Florence town hall depicts the face of Michelangelo’s friend Francesco Granacci, who approved the placement of the prominent Italian artist’s “David” sculpture.

It seems that the shroud of mystery over a small wall carving of a curly-haired man on a town hall in Italy’s Florence may finally have been dispersed after a US-based historian told The Wall Street Journal (WSJ) that he had found proof confirming that the outline could be the work of Michelangelo.

Scientists have repeatedly dismissed the claims that the graffiti, nicknamed L'Importuno di Michelango, was covertly chiselled by the world-famous Italian artist and sculptor of the High Renaissance near the front door of the Palazzo Vecchio hall.

In an interview with the WSJ, Andriano Marinazzo, a curator and historian at Virginia's Muscarelle Museum of Art at the College of William and Mary, however, referred to his paper published in the Italian journal “Art e Dossier” in September that specifically points to an overlooked drawing in Michelangelo’s Louvre archive.

According to Marinazzo, the drawing could potentially be proof that Michelangelo may have actually carved the graffiti on the Florence town hall.

The Palazzo Vecchio. The town hall of Florence, Italy pic.twitter.com/KovQeK7Ruz

“The man in this sketch looks like the mysterious man on the Palazzo Vecchio”, he argued, adding that when researching the drawing, he found the delicate outline of a man with a prominent Adam's apple, Roman nose, weak chin, and a head of curly hair.

The historian also said that next to the sketch there was a written message from Michelangelo that read: “Who would ever say it is by my hand?”

Marinazzo added that he believes the prominent artist created the carving in 1504, when he visited Florence to oversee the installation of his sculpture “David” beside the front door of the town hall.

© AP Photo
Did Michelangelo Secretly Paint Symbols of Female Anatomy in the Sistine Chapel?
William Wallace, an art historian at Washington University in St. Louis, has meanwhile hailed Marinazzo’s findings, telling the WSJ that “we like discoveries because they remind us that history isn't a closed book” and that “there’s more to learn”.

He was echoed by Gary Radke, an art historian at the New York-based Syracuse University, who described Marinazzo’s hypothesis as “not ridiculous”, adding, “I don't know how we missed it before; I can't wait to get back to Florence to see it”.

Some, however, remained downbeat about the matter, with John Cunnally, an art historian at Iowa State University, dubbing the drawing as “crude and amateurish”, which he claimed is not in sync with Michelangelo’s style.

Florence Court Will Fine Those Using Michelangelo’s David in Commerce