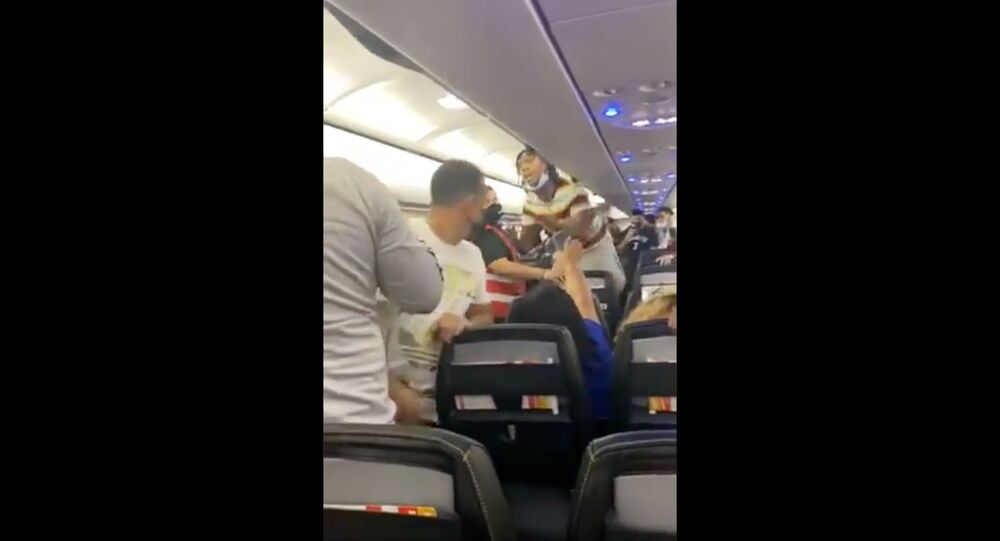 Newly surfaced cellphone footage revealed passengers aboard a Puerto Rico-bound Spirit Airlines flight engaged in a violent brawl over the weekend after a group of fellow flyers were seen maskless and walking the plane’s aisles.

The incident unfolded at about 7 p.m. local time on Sunday aboard a Spirit Airlines flight that had departed from Newark, New Jersey, to San Juan, Puerto Rico. Citing police, CBS correspondent David Begnaud reported that the altercation unfolded once the plane landed, and that the exchange of blows was prompted by a traveler who reportedly punched passenger Nyasy Veronique Payne.

Video circulated on social media shows Payne initially standing atop one of the plane’s seats, yelling out remarks to an individual in a white T-shirt before swinging into the crowd growing in the aisle. Law enforcement officials eventually make their way to the warring parties, and Payne is seen being struck with the electrical prongs of an officer’s stun gun.

Initial reports indicated that Payne was the passenger who initiated the brawl; however, speaking to another traveler on the flight, Begnaud was informed that Payne and her party were reportedly verbally attacked by three other travelers who were “yelling homophobic & racial slurs” at Payne and the two additional women she was traveling with when the plane landed.

One of the men making the remarks is said to be the same individual who first punched Payne.

Payne’s party, which also reportedly included a young man, are said to have caught the ire of fellow passengers over their failure to keep their masks on for the entire duration of the flight.

Telemundo Puerto Rico identified the man struck by Payne as 28-year-old Javier Lopez Cruz. It is presently unclear whether Cruz is the same individual who threw the first punch at Payne, and, if so, whether he will ultimately face any charges in the matter.

Payne was arrested following the incident and is being held on a $150,000 bond. She is scheduled to appear before a court on November 13.