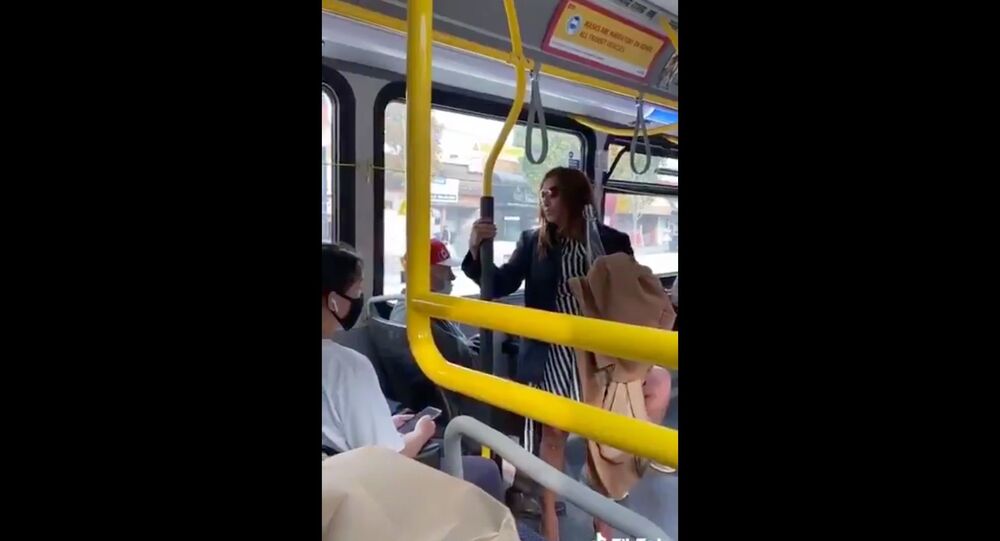 Newly surfaced cellphone footage recently prompted an investigation by Canada’s Metro Vancouver Transit Police after a woman was filmed being forcefully shoved out of a commuter bus for spitting on a fellow traveler.

The footage was initially posted on video-sharing site TikTok on Wednesday before it ultimately made its way across other social media platforms by Friday. Video shows a maskless woman standing in the middle of the bus aisle, slinging her saliva toward an unidentified individual after a commuter is heard saying “disgusting.”

Within seconds of the action, however, the woman is pushed out of the stationary bus by the offended individual - much to the shock of others aboard the bus. It’s unclear if the individual who made the remark is the same traveler who was spat on.

“Hey, come on now,” the traveler documenting the incident is heard saying off-camera as others urge the pair to “chill” and “stop.”

The 29-second video eventually cuts offs with the upset commuter wiping his forehead before sitting back down in his seat. As for the woman, she’s seen lying on the sidewalk as another woman on the bus decides to get off and help her out.

At present, investigators have not been able to determine whether the incident unfolded recently or occurred sometime in the last few months. Officials have been able to contact neither the netizen who uploaded the post nor either of the parties seen in the video.

“That will play a substantial role in our investigation,” he said. “We can see the video, and we have an idea of what happens in that portion of the video, but we don’t know what led up to the incident. For us to come to any kind of conclusion would really just be a guess.”

It’s believed the incident unfolded as a result of the woman not adhering to the TransLink bus policy mandating that a mask or face covering be worn for the duration of travel.

In a separate statement to Global News, Hampton urged passengers to not confront travelers ignoring the mask policy, and to instead socially distance themselves from such rulebreakers. “We don’t want people putting themselves at risk,” he said.

Law enforcement officials are urging individuals with knowledge of the altercation to reach out.

New Masks for Fall 2020: How Different Countries Prepare for Halloween