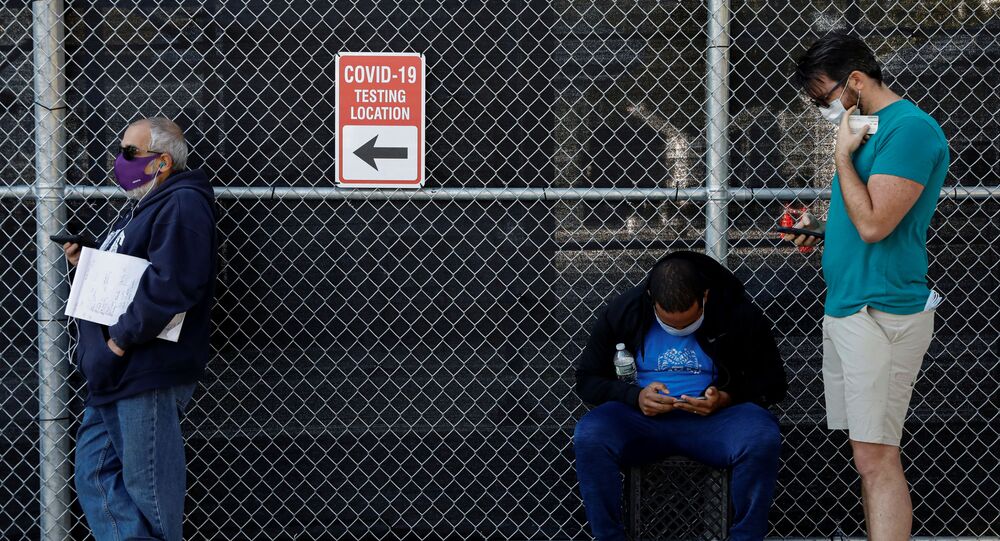 As the COVID-19 pandemic continues to take its toll on the world, Johns Hopkins University’s (JHU) coronavirus tracker has revealed that all but four US states have raging outbreaks with steady or rising case counts, despite efforts to curb the spread of the respiratory illness.

The university’s Wednesday data release notes that New Hampshire, Virginia, Oregon, Hawaii and the District of Columbia are the only US areas that are reporting a weekly decline in COVID-19 cases.

However, whereas Maine, New York, Maryland, Delaware, Iowa, Arkansas, Oklahoma, Utah, California and Washington have experienced no weekly changes in reported cases, the remaining US states have all undergone COVID-19 spikes.

The latest figures reported by the university indicate that about 60,315 new COVID-19 cases were reported Wednesday in the US, as the nation’s pandemic-related death toll rose by some 933 people.

The concerning new figures come as the Land of the Free recorded 70,000 daily cases for the first time since July just last week, a worrying fact which has only amplified the alarm sounded by health professionals who are doubling down on urging Americans to heed COVID-19-preventative measures.

In fact, as many Americans are turning their attention toward the looming holiday season, health experts have underscored that COVID-19 cases will only continue to spread as families gather for Thanksgiving and Christmas and generally opt to meet indoors amid the cold weather.

Most recently, the US Centers for Disease and Control and Prevention (CDC) issued a new guidance update, suggesting that families go for small-scale gatherings among individuals who live in one household, rather than have relatives over. Other options included having a virtual dinner and opting for online holiday shopping.

“I know there will be plenty of families who mock this kind of advice and say, ‘That’s ridiculous. We’re going to get together and enjoy Thanksgiving like it’s supposed to be, and no one’s going to tell us otherwise,’” Dr. Steven Woolf, director emeritus of the Center on Society and Health at Virginia Commonwealth University, told USA Today.

"That may give them a sense of independence, but then the virus gets to Grandma, and she ends up in the hospital on a ventilator, and then you live with the guilt.”

At present, JHU’s data states that the US has documented over 8.2 million COVID-19 cases. The death toll has topped 221,000.

Comparing the total count of recorded US deaths in 2020 to data from the year prior, a CDC report released on Tuesday revealed that an estimated 299,028 more people died between January 26 and October 3 than would normally be expected, with at least two-thirds of those deaths stemming from COVID-19.

The CDC found that the largest percentage increases were reported among individuals aged between 25 and 44, and that the disease has taken a disproportionate toll on Black and Latino Americans, as has been previously noted in other analyses.

Both the report and raging case counts across the US come less than two weeks before the US election, which has seen the COVID-19 pandemic take center stage, as US President Donald Trump has repeatedly tried to downplay the deadly virus and his overall handling of the pandemic.

Hard Times Ahead: COVID-19 Hospitalizations Soar in Over 30 US States as Virus Spreads