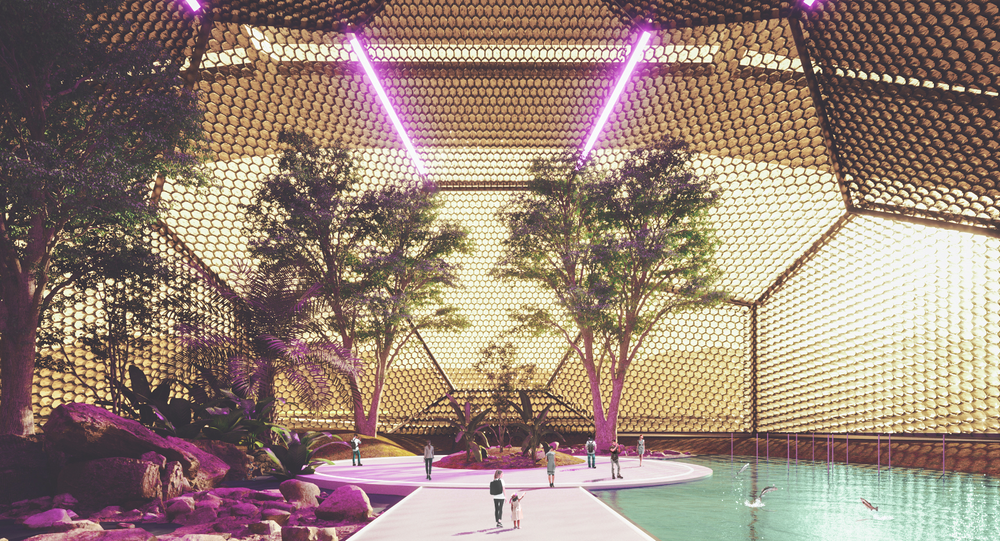 Designed by Spanish Scientists, This is What a Martian City With a Million People Could Look Like

“Welcome to Nüwa, the capital of Mars. Mars settlers would live here and in four other vertical cities embedded in one of the hundreds of cliffs, which protect the planet against radiation while allowing sunlight to pass through.”

This is what the text drafted by a group of Catalan researchers from the Institute for Space Studies of Catalonia (IEEC) says. As part of the Sustainable Offworld Network project (SONet), they have designed a city to sustainably accommodate up to a million people.

SONet was selected as one of ten finalists out of more than 175 participants in the competition, focusing on developing a sustainable city on Mars to house one million people. The competition was promoted by the Mars Society, the world’s largest and most influential space defence organisation, dedicated to the exploration and potential settlement of Mars

“When we heard that we had made it to the finals, we realised that the effort had been worth it. Most of us are professionals and scientists, and we knew that we had been well-prepared, but that was our first experience of working is a team. That gave us a great boost, and allowed us to continue working,” Guillem Anglada-Escudé, the team coordinator, said.

Researchers have called their imaginary city Nüwa, in honour of a Chinese goddess who created humanity. In addition, this goddess used five stones to protect the skies and Nüwa, and the project has five urban centres. The city contains all aspects of human life; settlement, architecture, vital supports and art, an economy and a political system.

“From an architect’s perspective, designing functional urban areas within the constraints of an unknown world was both an amazing and extremely enriching experience,” Alfredo Muñoz, co-founder of ABIBOO studio and leader of the architectural design team, said. "We are excited to continue developing this first design, as well as finding radical new solutions that will work on Earth as well.”

The project is being developed by over 30 researchers, and is led by Catalan experts, although the team includes participants from other countries such as the UK, the US, Argentina and Germany. A 20-page conceptual design report was drafted that combines a wide range of different aspects, from space exploration to sustainable development. The group also made it a point to include renowned female researchers including Gisela Detrell from the University of Stuttgart and Laia Ribas from the Institute of Marine Sciences.

According to the project coordinator, out of 30 team members, ten took an active part, while the rest contributed to discussions and provided feedback on specific topics.

Sputnik asked researchers the question that has long intrigued humanity: is there life on Mars?

Anglada-Escudé worked on related issues before presenting this project. He believes that there may be primaeval life on Mars, underground, but would be different from that on Earth as there is no obvious evidence of its existence on the surface.

“How this hypothetical life originated is one of the fundamental questions that we would like to clarify since it has to do with how unique and precious our world is,” he said.

The project will now focus on industry, academia and a variety of private partners to help it move toward making a Martian city that is feasible for future human settlement on the red planet.

“A project like this requires collaboration across a wide range of disciplines,” noted Miquel Sureda, a professor of Aeronautical Engineering at ESEIAAT-UPC. “The Nüwa project’s success in the Mars Society competition could help SONet gain visibility and attract staff and funding”

© CC0 / SpaceX Flickr
Netizens Bombard SpaceX With Questions After Learning That Tesla’s Roadster Approached Mars
The SONet project was defended at the final gala on 17 October, and, although it did not win the $10,000 first prize, it nonetheless received an award. “We will compete not to win, but to try to convince people that sustainability and the human factor are more important as a central design element than some technical aspects,” Anglada-Escudé said.