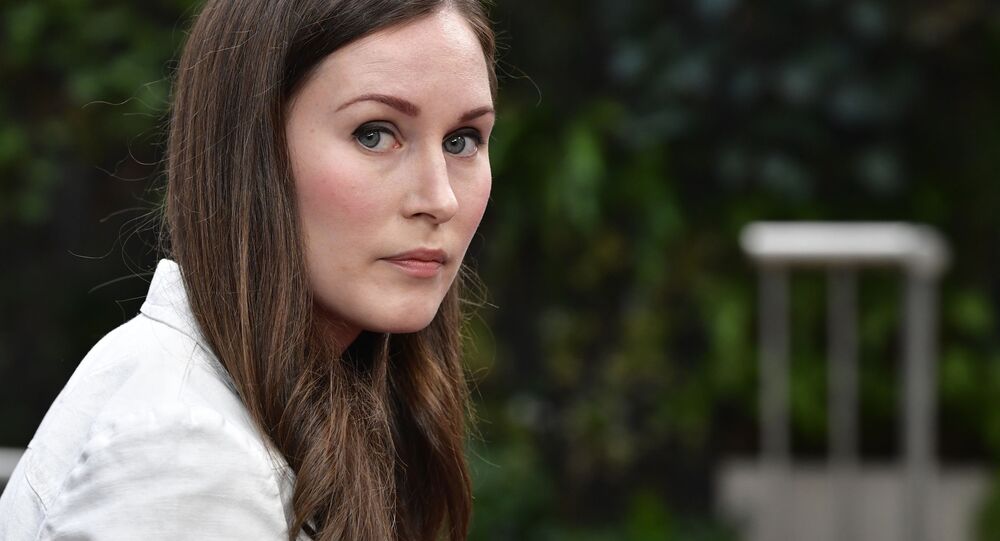 A glamorous photo of Finland's 34-year-old Prime Minister Sanna Marin with a plunging neckline has sparked an uproar on social media. While many argued this conduct was unbecoming of someone in her position, others started posting similar photos in support of her.

Finland's Social Democrat Prime Minister Sanna Marin has found herself in the midst of a controversy after suggestively posing for the fashion magazine Trendi in a blazer with a plunging neckline, no shirt and no bra.

The magazine's Instagram page was quickly flooded with scathing criticism from social media users, with many suggesting that the image was highly unbecoming for someone in her position. To them, it obviously didn't help that the photo was taken in the courtyard of the prime minister's official residence, Kesäranta.

However, many newspapers rushed to defend the prime minister's behaviour and voice boundless admiration for her "beauty", "strength", and "independence". Some even dared to say that Marin is without doubt the most beautiful prime minister in the world, which is not quite so far-fetched given that she is the world's youngest prime minister.

Many of Marin's supporters, especially women, unleashed a defence campaign of their own, dressing and posing like their idol. Shortly afterwards, the hashtag #imwithsanna emerged, sparking a movement of its own and gaining a foothold.

​In Finland conservatives are angry because prime minister @sannamarin showed a bit of cleavage in a magazine photo shoot.

I don't have much of a cleavage, but I'm with her. (And all the women who want to dress as they please)#sannamarin #tissivakopäivä pic.twitter.com/pnA0YrYk26

​Amid the controversy, some remembered the unorthodox and downright bizarre photos of previous Finnish leaders, including longstanding President Urho Kekkonen, who was pictured in a hipster-like outfit, and even Carl Gustaf Mannerheim in the nude on horseback.

​Anu Koivunen, a media scholar and Professor of Gender Studies at Tampere University, credited former Prime Minister Alexander Stubb, who served in 2014-2015, for broadening the boundaries of what a Finnish politician could look like. The physically active Stubb often competed in marathons and triathlons, clad in shorts and tight-fitting swimsuits.

Marin was raised by a single mother, who later entered a same-sex relationship, and has a working-class background, working as a cashier. She stressed that she is the first member of her family to finish high school and obtain a university education, for which she credited the Finnish welfare state. Since becoming PM in late 2019, she has had her share of both admiration and controversy.