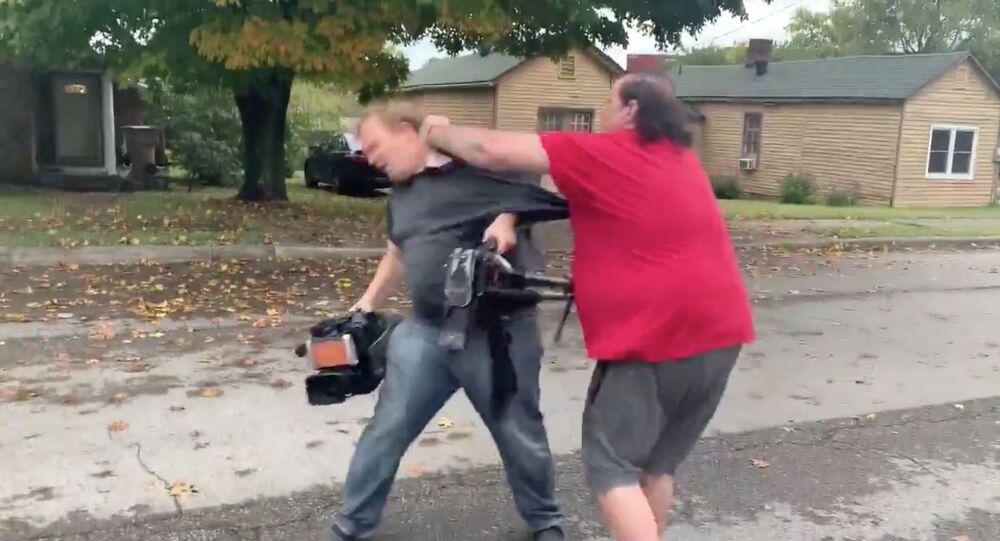 Tennessee's Metropolitan Nashville Police Department is on the hunt for an unidentified individual who was filmed over the weekend attacking a photojournalist with the WSMV local news station.

The attack unfolded on Sunday in front of Nashville’s Napier Elementary School, where broadcast journalist Caresse Jackman and a station photojournalist were filming for an upcoming segment, according to a release published by WSMV.

Mediate reported that the segment the pair of journalists was working on focused on the efforts of two local women to sew some 300 face masks for students returning to in-person learning at the school.

Footage of the violent assault was captured on camera as the pair prepped for the station’s feature story. Jackman is initially seen on video turning her attention to a red-shirted man aggressively approaching the scene, asking him if he's OK before the sudden attack.

“We never said a word to him. I got out of the car to record. He started to approach me,” Jackman wrote of the incident in a Twitter post. “My photog tried to get his attention so he wouldn’t come my way. The man then attacked us.”

Video shows that after the man says “I told you” to the photojournalist, he immediately begins to grab onto the cameraman and his equipment as Jackman is heard urging the man to stop in the background.

In cellphone footage captured by Jackman, the attacker is seen pulling on the photojournalist’s shirt before striking him in the face. Seconds later, the man appears to lose his balance and falls to the ground.

“That’s what you get,” Jackman yells out as the man sits in the middle of the street. “What’s wrong with you? Leave him alone.”

“Get back or I'm calling the police. You assaulted my partner; we can press charges against you. I hope you know that,” she adds before joining the photojournalist inside the car.

Although the video cuts off with the pair back inside their vehicle as the man approaches them again, Jackman noted in a follow-up Twitter post that they were able to drive to a “safe location” to contact their station managers and notify the police of the incident. She also noted the pair were OK.

The station’s release states that by the time police arrived at the scene, officials were not able to locate the offender. “News 4 believes the man lives or stays in that area,” reads the statement.

Help Thy Neighbour: Church in Tennessee Donates $12,500 to Help Local Businesses During Pandemic