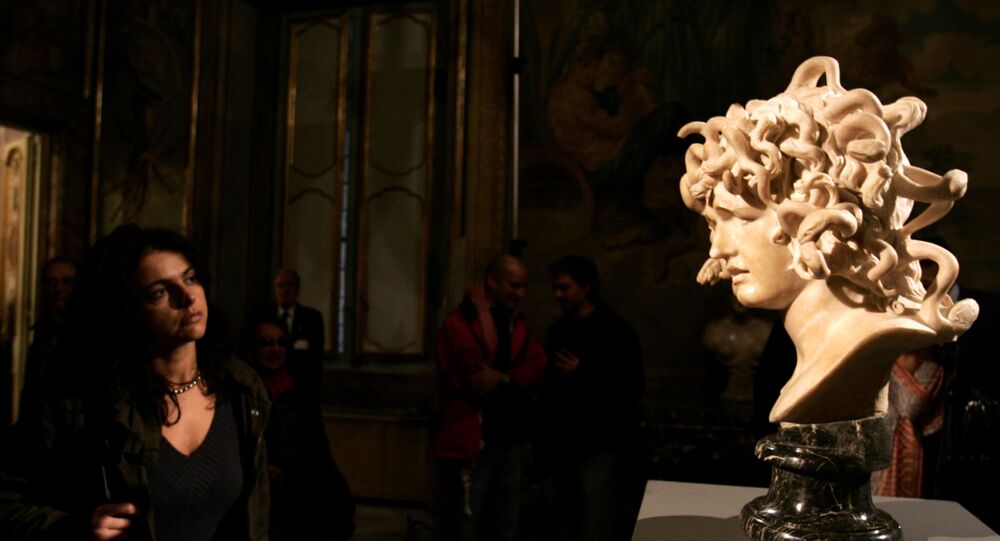 According to ancient Greek mythology, Medusa was not always a terrible monster with a petrifying gaze. She was only turned into what she is popularly known for after Poseidon raped her in Athena's temple. Athena then caused the change to Medusa, and refused to punish Poseidon for his attack.

After it was announced that a statue showing a reversed version of the famous Medusa myth would be erected in front of the Manhattan courthouse under the #MeToo movement, social media users quickly became engaged in heated debate involving everything from #MeToo to interpretations of Greek mythology.

The sculpture, created by Luciano Garbati, pictures Medusa Gorgo holding a sword and the head of Perseus - the man who originally killed her on the order of King Polydectes. It it a reversed version of a more famous statue - Perseus with the Head of Medusa, sculpted in the 16th century by Benvenuto Cellini and exhibited in the Piazza della Signoria in Florence, Italy.

The Medusa reboot will be put up on Tuesday in Collect Pond Park, and the project team notes that the installation denounces victim-blaming and thus echoes the #MeToo movement.

"Through this work, Garbati asks “how can a triumph be possible if you are defeating a victim?” This narrative of victim-shaming in stories of sexual violence echoes through time, and into the present day “me too” movement", the Medusa With The Head (MWTH) project said in a statement on the exhibition.

whoa. a seven-foot-tall bronze sculpture of "Medusa With The Head of Perseus" will be installed across the street from 100 Centre St., Manhattan's criminal courthouse this weekend, a commentary on the #MeToo movement https://t.co/PXDsmhVWTY pic.twitter.com/OcjL2BImgJ

​The new vision of the myth has naturally caused debate online - with people clashing over myth interpretation and questioning the appropriateness of glorifying Medusa killing Perseus, since Poseidon was her rapist, not Zeus' son.

Is this woman familiar with the lore, cause why did she not do this to the man that actually raped her.

Did they miss the point where POSEIDON raped Medusa, not Perseus?
Why are virtue warriors always so pathologically miseducated?

​Others pointed out that it was a woman - Athena the goddess of wisdom - who turned Medusa into the monster.

Tbh, the best and the most telling part of the original myth is that she was cursed into this monster by... who was it again? Oh, a woman.

Lol someone tag Athena. She needs to see this wig snatch.

Great, now we have revisionist mythology.

Feminism is the worst.

​Those describing themselves as rape survivors denounced the idea, saying that they would not want violence to be offered as a solution.

Saying this in a calmer voice: I am well and fully aware of the myth of Medusa, and I goddamn hate that this is being installed outside a courthouse.

I’m a survivor, and this is not “me too.” If she beheaded a character who raped her, then that’d be on theme, at least. Killing a man who’s completely unrelated to the violence committed against her is just... mindless lashing out. It’s not even retribution, let alone justice.

​Other users suggested how they think the statue should be interpreted.

Medusa was raped, punished/cursed for her own rape, and then murdered by Perseus for harming men who came to harm her. He mounted her head as a trophy. A statue with her holding his head instead is an embodiment of women finally, finally *taking* the justice they’ve been denied.

There is a famous statue of perseus holding her head. This is an inversion of that pic.twitter.com/CPzfmn6WQu

​Many ridiculed those who missed the point that the statue is a reverse version of Cellini's sculpture.

Medusas statue is the exact opposite:

There's no triumph, no glory. Both his head and her sword are lowered.

Her expression is tired: this isn't the first mofo she's killed for trying to claim her head as a prize to advance THEIR 'noble quest.

And y'all just...missed it huh?

​Others, inspired by the new statue, shared ideas on Medusa avenging herself.

This art piece actually gave me an idea for a film if I ever have to chance to make it. Is medusa getting revenge in those who wronged her. And this statue was a huge influence for that Idea

​Some dug deeper into mythology, considering an alternate outcome caused by the proposed vision of the Medusa myth. As, originally, Medusa was turned into a monster after being raped by Poseidon and attempted to seek protection from Athena before being killed by Perseus, a reverse universe could have Andromeda not saved by Perseus.

This statue poses a good/fun question though. What would have happened, had THIS been the outcome for the original story of Perseus? In reality we'll never know do to the fact that it is just that a story. A part of history that has been passed down through the ages.