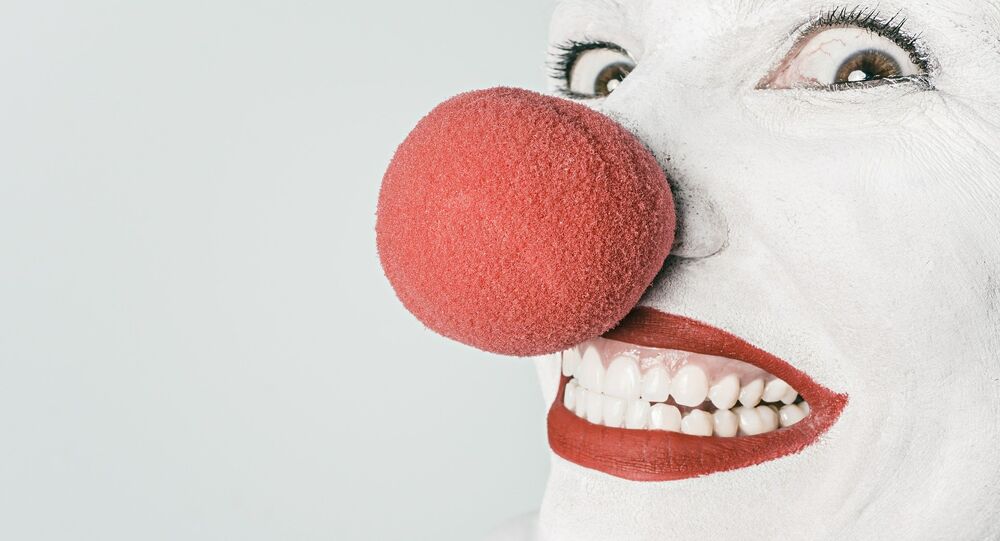 It may sound like a silly prank, but four years ago that same silly prank went out of control and became a global phenomenon, with people dressing up as evil clowns in order to scare neighbours and bystanders. Soon it escalated into violence as people who had low tolerance for spooky clowns began attacking the pranksters and the latter retaliated.

An individual dressed up as an evil clown is tormenting the residents of Kingswinford, local media reported. Witnesses say the man, who walks around the streets of the town bare-chested, is wearing clown make up, fake teeth, and has knife scars on his belly.

A young couple, who hand out leaflets on the streets, described a scary encounter with the presumed prankster.

"At first I just thought he was on his way to a children’s party or something, I didn’t see him that clearly. He stared at my girlfriend for a minute or so and started to laugh like a clown. We tried to ignore him and carried on doing the leaflets, we tried to pay no attention to him to see if he would stop. But as we got closer, he got in his car and opened his passenger door and asked me if I was someone he knew. When I said no, he started laughing more", said one from the couple, who wished to remain anonymous.

A paperboy became another "victim" of the clown. The boy’s mother said he was left hysterical after the clown went up to him. She and her husband decided to find the weirdo, but by the time they got to the place where the boy had met him, the clown was gone.

A spokeswoman for West Midlands Police said law enforcement had received several complaints from residents, but said there is no reason to believe that a crime had been committed.

"Officers have been attempting to identify the driver. It is unclear at this stage whether any criminal offences have been committed", the spokeswoman said.

In 2016, there were several clown-related incidents in the West Midlands. According to the Express & Star newspaper, a teenager used a clown mask to assault another boy, and a 22-year-old woman was also intimated by a person dressed as a clown, who chased her down the street. There were also reports of people, primarily children, being targeted online, with people sending them threatening messages.

The incidents occurred after creepy clown pranks swept across the United States and then went global, in which people dressed up as spooky clowns and scared people on the streets. Soon, the prank went out of control, with social media users talking about massive clown attacks. The situation then escalated into violence, with people attacking the pranksters.