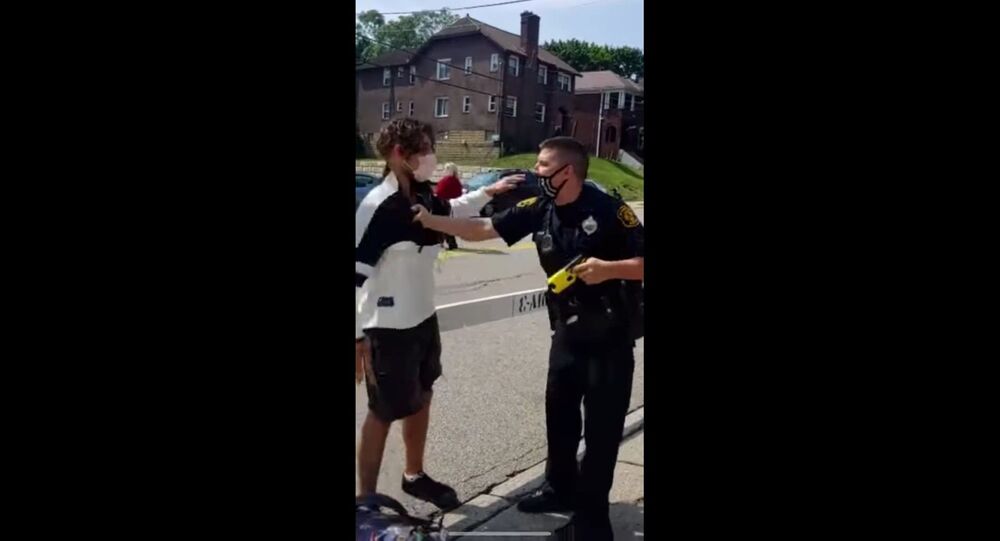 An officer with Pennsylvania’s Pittsburgh Bureau of Police was recently placed under investigation after cellphone footage captured the law enforcement official arresting a resident because he critiqued the cop’s face mask and reportedly failed to follow orders and leave the area.

The incident unfolded at the Squirrel Hill Farmers’ Market on September 6 and involved Pittsburgh Police Officer Paul Abel and local resident Daniel Holc, who initially approached the officer to inform him that his mask was disrespectful to the American flag. Video shows that the front of Abel’s mask featured the American flag, but with a blue line - an image used as a part of a pro-police movement in response to the Black Lives Matter movement.

A release issued by Pittsburgh Public Safety explains that Holc had repeatedly tried to engage with Abel about his mask and that the officer eventually used force to arrest Holc. Cellphone footage of the tense altercation picks up with Abel pointing a department-issued stun gun and yelling at Holc to turn around and place his hands behind his back.

“I don’t care. You didn’t listen. When I told you to go away, you didn’t want to listen,” Abel says in a raised voice. Holc in turn questions Abel’s actions and asks whether he has actually committed a crime, to which Abel doesn’t answer.

After Holc asks whether or not he’s officially under arrest, Abel appears to lose his temper even further, yanking Holc on the sidewalk and yelling out, “Yes.” The officer is briefly heard saying, “Dude, I’ve had it.”

With Holc eventually sitting on the ground, it’s only then that Abel informs him he is under arrest for failure to disperse. At this point in the recording, a crowd of onlookers begins to form near the pair, with many off-camera remarking that the situation is “ridiculous” and “out of hand,” and that the “officer needs to be careful” with how he proceeds with the arrest.

With many residents expressing their opinions on the sideline, Abel eventually states that he opted to place Holc in restraints because “he decided to be disrespectful to me,” a response that was not warmly accepted by some in the crowd.

“All I said to you was that it was disrespectful to have a different color on the flag,” Holc later clarifies. “You can’t manipulate … you cannot manipulate the colors of the flag - that’s disrespectful. That’s all I said. And then you said, ‘That’s your opinion,’ and I said ‘No it’s not, there’s an order on the flag, there’s a code of the flag.’”

Holc continues by explaining that he was preparing to leave Abel alone prior to the escalation, but was waiting for a blind couple to walk past him first at the market. “I made sure the blind man could get through, and I was starting to walk away, and then you grabbed my arm and threw me up on this roadblock,” he said.

The remainder of the recording captures more complaints from nearby onlookers as Holc explains that he has a right to free speech. It ultimately cuts off when tensions appear to spike back up as Abel begins to search Holc’s backpack.

The city’s release on the altercation notes that Abel recovered marijuana, THC edibles and drug paraphernalia from Holc’s bag, noting that the arrestee did not have a medical marijuana card in his possession. Holc was eventually charged with resisting arrest, defiant trespass, disorderly conduct and three counts of possession.

It’s worth noting that the city of Pittsburgh decriminalized the possession of small amounts of marijuana in December 2015; however, the Pittsburgh City Paper has reported that despite the legislation, such arrests have continued.

A preliminary hearing for Holc is scheduled for October 5.

As for Abel, local media outlets have reported that the law enforcement official is no stranger to a little bit of controversy. The Pittsburgh Post Gazette reported that in 2008, Abel was charged with aggravated assault, reckless endangerment and driving under the influence after he allegedly pistol-whipped a man near a bar when he was off-duty.

Although Abel was suspended without pay from the force for the incident, he was later cleared of all charges in June 2009 and reinstated after arbitration.

The weekend altercation will be reviewed by Pittsburgh’s Office of Municipal Investigation. It’s unclear if Abel is on administrative leave pending the probe.