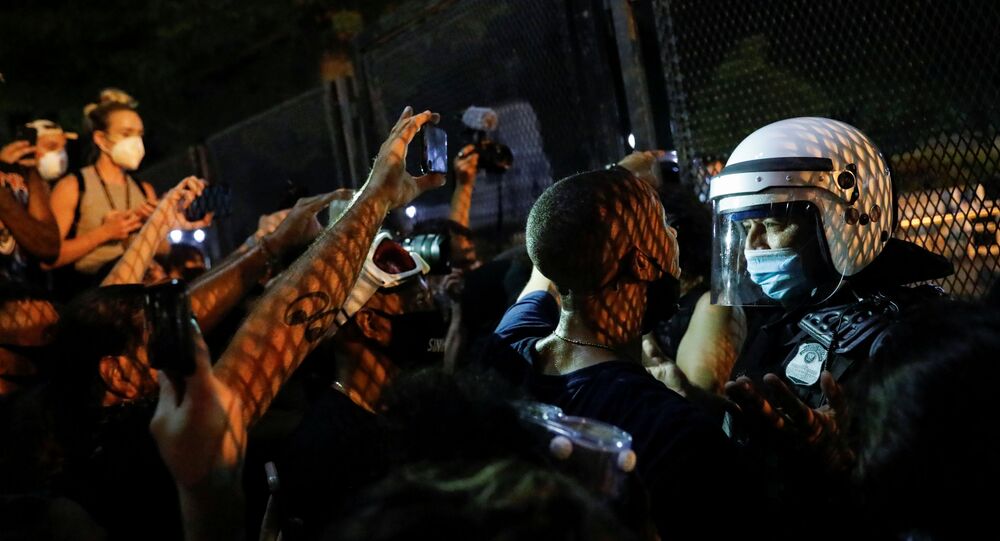 In footage from 24 August, which quickly went viral, Black Lives Matter protesters singled out the table where Lauren Victor was sitting with a friend of hers and went up to it, screaming and demanding that the two throw their support behind them.

The woman who was heckled and yelled at by Black Lives Matter protesters in a now viral video has lambasted their “bullying” tactics and admitted that she “felt fear” at the time.

Writing in a Washington Post op-ed, Lauren Victor said she did not see any protest signs when the group came up to the table, while she was dining with her friend at a restaurant in the Adams Morgan district in Washington, D.C., and it was unclear what they were rallying against.

“I asked who they were and why they were marching. No one would answer me. Why march and hold back your message?” she said.

The 49-year-old urban planner charged that it was “never okay to coerce people's participation”, arguing that but for the demonstrators’ insistence she would have raised her hand in solidarity on that day of protests, following the shooting of Jacob Blake by police.

“If you want my support, ask it of me freely. That’s what we do in a democracy”, she said, admitting, though, that the “fear” she felt as the protesters yelled at her didn’t affect her overall support for the BLM movement and its goals.

“I have actively participated in protests since this event. I have experienced nothing coercive from my fellow protesters, nor toward bystanders”, she said.

The much debated video captures the moment when a crowd of people, including white Americans who had gathered outside restaurants and accused diners of enjoying their “white privilege”, approached Victor's table outside the Mexican restaurant Los Cuates.

“White silence is violence!” the protesters chanted, with many thrusting their fists in the air.

“Are you a Christian?” one protester queried, screaming in her face, before others demanded she raise her fist.

Victor refused, even after her dining companion met the insistent demand.

The matter hit a raw nerve with Twitterians, as many dismissed coercion:

“You don't win supporters by screaming in people's faces and intimidating them. How many people have watched this video and been turned off? Is it about making a real change or just ego gratification?”

Another saw a more far-fetched implication in it:

“When we protest, it’s probably best to remember first principles: personal agency and human decency”, a third weighed in.

There has been significant public support for the Black Lives Matter protests, which have been taking place across the country following the death of black man George Floyd in late May at the hands of Minnesota police.

Another flare-up of protests ensued shortly after another man, Jacob Blake, became paralysed from the waist down after police shot him seven times in the back in Kenosha, Wisconsin.