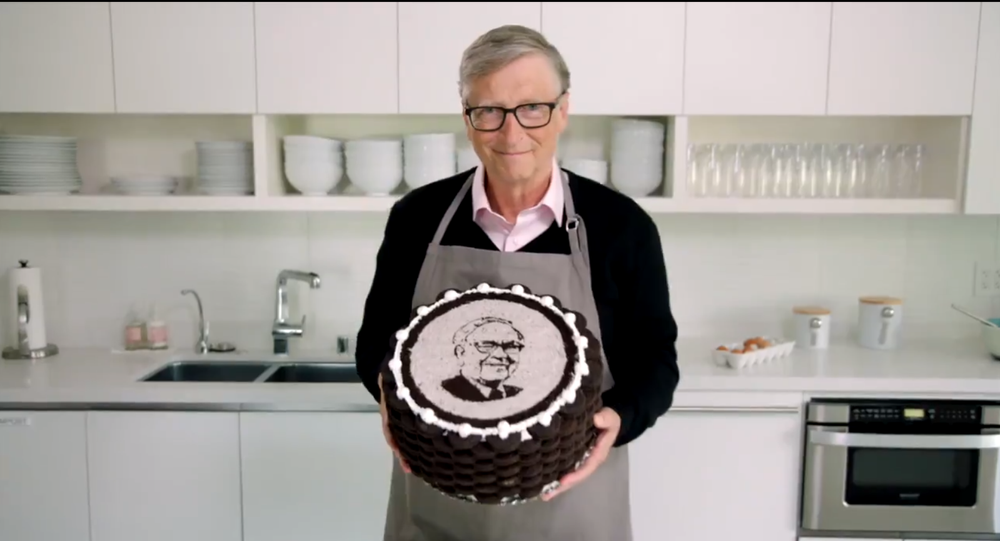 According to Gates' birthday remarks, Warren Buffet chose "the diet of a 6-year-old", which is why the founder of Microsoft decided to bake him a chocolate cake, "in honor of his dietary preferences".

Microsoft founder Bill Gates congratulated American business tycoon Warren Buffet on his 90th birthday, posting a video in which he makes Buffet a chocolate cake decorated with a bunch of Oreo cookies and a portrait of the investor in chocolate powder.

In a blog post he released praising Buffet, Gates described him as "so youthful that it’s easy to forget he was once an actual young man".

"Warren Buffett turns 90 years old today. It’s hard to believe that my close friend is entering his tenth decade. Warren has the mental sharpness of a 30-year-old, the mischievous laugh of a 10-year-old, and the diet of a 6-year-old. He once told me that he looked at the data and discovered that first-graders have the best actuarial odds, so he decided to eat like one. He was only half-joking", Gates wrote, explaining the story behind the cake.

​In the post, the Microsoft founder shared photos of Warren and his wife and children, also offering that Buffet has spent 30 years sleeping, there have been 10,649 days since their first meeting, and there are only two numbers Gates has on speed dial - his wife's Melinda and Buffet's.

"A person that I admire as well as like—that's the perfect description of how I feel about Warren. Happy birthday, my friend", Gates wrote.

Warren Buffet is an American investor and business tycoon. With a net worth of US$78.9 billion as of August 2020, he is, according to Forbes, the seventh-wealthiest person in the world. Gates holds second place in the rating.