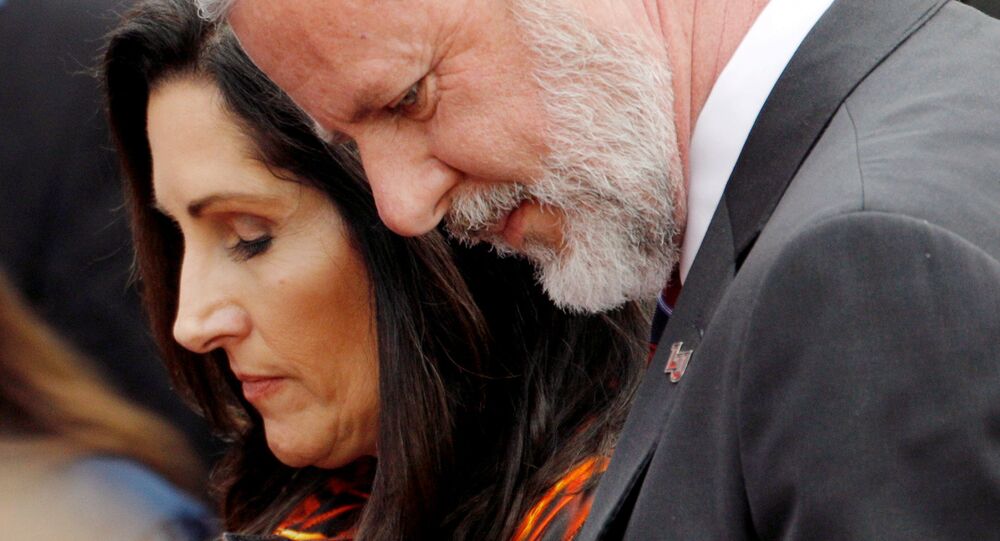 Becki Falwell and her husband Jerry Fallwell Jr., who resigned as president of Liberty University this week over a previous sex scandal, dismissed the latest accusations of misconduct as "mean-spirited lies".

A new sex scandal has emerged at the conservative Christian university where televangelist Jerry Falwell's son resigned as president this week.

An un-named former student at Liberty University told Politico that Becki Falwell, the wife of Jerry Falwell Jr., jumped into bed with him when he stayed at their house after band practice with their oldest son and performed oral sex on him.

"She was the aggressor," said the ex-student, although he admitted that he let her continue.

He also provided the website with screenshots of flirty smartphone messages he claims were from Becki Falwell.

One spoke of a friend who "said that she wants you to cut [your] bangs when you get your hair cut. I think that you are beautiful just like you are," she apparently wrote in September 2008. "You don’t want to cover up those killer eyes of yours and you know the bandana drives me wild … 🙂" she added.

Three months later, after the young man rejected Falwell's advances, she wrote: "Maybe time will heal whatever wounds that I have caused and your Christian heart will allow you to forgive me."

The Falwells dismissed the latest allegations as "mean spirited lies."

"It is unfortunate that the coverage of our departure has turned into a frenzy of false and fantastic claims about us," they said said in a statement.

"These false and mean spirited lies have hurt us and our family greatly and we will respond fully with the truth at an appropriate time. At this time, however, we think it is best to move on and help the Liberty community focus on its very bright future."

Liberty University has "policies against employees having sexual relationships with students, as well as having other inappropriate relationships outside of marriage, whether consensual or not," senior vice-president Scott Lamb said.

But he added that the institution had no records of sexual misconduct complaints against Becki Falwell.

Falwell Jr. took over as president of Liberty University from his father, the famous televangelist Jerry Falwell Sr., after his death in 2007.

But he resigned this week after Miami pool attendant Giancarlo Granda revealed he carried on an affair with Becki Falwell for years, where the former president would watch as they had sex. Granda called Mr Falwell a "predator" who sent him a photo of a student exposing herself.

Falwell Jr. claimed Greanda was merely trying to blackmail the couple, and blamed the affair on his wife.

Falwell Sr. was known for his moral crusades and successfully suing pornographic magazine Hustler over a satirical parody that claimed his first sexual experience was with his mother in an outhouse while drunk.

The Falwells are well-connected in conservative circles, socialising with President Donald Trump's family among others.